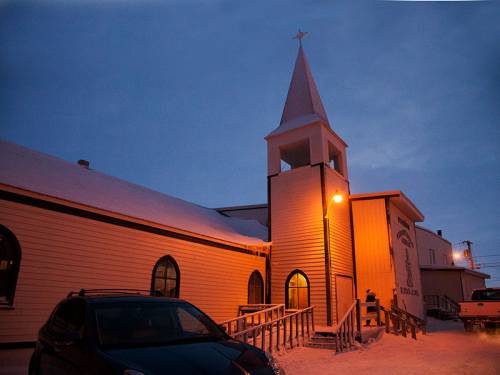 Utqiagvik Presbyterian Church on a mid-winter’s day. The church was established by missionaries on Easter Sunday in 1899.

The Rev. Joseph Reid has had two unique calls from God to preach at two historic churches with one big difference — the view.

“My office window at Westminster Presbyterian Church in Birmingham, Alabama, looked out on the overflow parking area for the church,” Reid said. “From my office in Utqiagvik, I can see the Arctic Ocean.”

Reid, who was born and raised in South Carolina, said his transition from a predominantly African-American congregation in Alabama to a mostly Iñupiaq congregation in Alaska has been virtually “seamless.” Of course, he’s noticed the change in temperatures from Birmingham to Utqiagvik (formerly Barrow), the northernmost city in the United States. He’s also noticed the ice, the wind and the snow — in July. Still, none of these differences troubled him.

Technology in the tundra 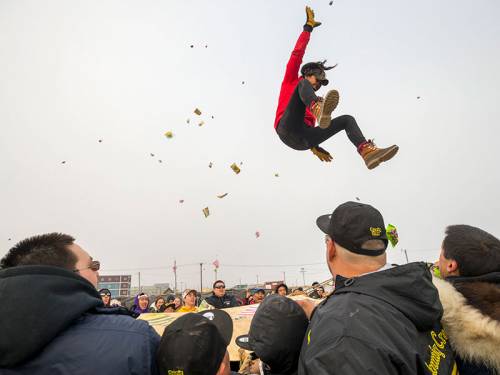 A blanket made of the seal skins that covered a boat whose crew brought in a bowhead whale is used to toss celebrants at the whale feast of Nalukataq. The International Whaling Commission voted in September to renew annual Alaska Native whaling quotas automatically, as long as bowhead harvests remain sustainable.

What’s essential for this rural Alaskan church is its use of technology and media to spread the gospel. Videos of services are available through the church’s YouTube channel and on its Facebook page, Iñupiat Hope. In addition to Sunday services at 11 a.m. and 7:30 p.m., church members and the community come together for a live broadcast of singing and testimonies Sundays from 9:30 to 11:30 p.m. on a local radio station. Each Friday at 10 a.m., Reid also hosts a one-hour radio talk show, “Real People,” featuring residents of the North Slope Borough, an area that encompasses 95,000 square miles but has fewer than 10,000 residents.

The Rev. Curtis Karns, executive presbyter of Yukon Presbytery, said that until recently, technology has not been readily available in the Arctic.

“This year, for the first time, fiber-optic cable has been strung across the Arctic Ocean all the way to Barrow [Utqiagvik], so we’re hopeful that many of our villages will be able to benefit from that by the end of the year,” he said.

In the Presbytery of Yukon, eight of its 21 congregations are located hundreds of miles from larger communities and are accessible only by aircraft. The presbytery has four distinct cultural groups: Iñupiat Eskimos in the north speak Iñupiaq; Yupik Eskimos in the west speak St. Lawrence Island Yupik; and in the interior and south central are Korean and English speakers.

In the North Slope — the largest municipal government in the United States by area — technology is helping church services and other programs reach villages that do not have pastors or road access, according to Harry K. Brower, mayor of the North Slope Borough.

“In the wintertime, reaching many of the villages means either traveling by snow machine and sled or aircraft, which is very expensive. Through technology, faith is still being provided to the families that wish to build their faith in their communities,” said Brower, a lifelong member of Utqiagvik Presbyterian.

The village of Utqiagvik has a population of more than 4,300 people, of which more than 60 percent are Iñupiat. For a major source of their food, many Iñupiat people take part in subsistence hunting, fishing and whaling. Utqiagvik Presbyterian also operates a food bank, coordinated by deacons with help from community volunteers, which helps feed up to 500 people each month. The food bank receives funds from the Arctic Slope Community Foundation, which was founded by the Arctic Slope Regional Corporation (ASRC).

The ASRC is one of the original 12 Alaska-based regional corporations created by the Alaska Native Claims Settlement Act (ANCSA). Signed into law in 1971, ANCSA was designed to resolve land claims of Alaska Natives. 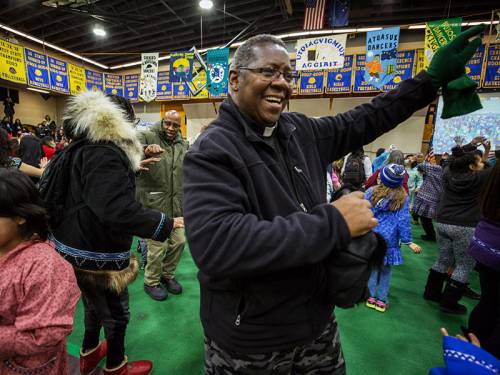 The Rev. Joseph Reid and Stated Clerk of the General Assembly the Rev. Dr. J. Herbert Nelson, II, (background) join in celebratory dancing during the renewal and healing event in Utqiagvik.

Two major reconciliation events, one led by the Presbytery of Yukon in 2012 in Gambell, Alaska, and a second national church event in February 2017 in Utqiagvik, responded to the intergenerational trauma that indigenous people have suffered because of the collision of Western and indigenous cultures and the complicity of the Presbyterian Church and other churches in overrunning cultures, according to Karns.

In February 2017, the Rev. Dr. J. Herbert Nelson, II, Stated Clerk of the Presbyterian Church (U.S.A.)’s General Assembly, and the Rev. Gradye Parsons, former Stated Clerk, traveled to Utqiagvik to issue a formal apology to Native Americans, Alaska Natives and Native Hawaiians. Directed by an action of the 222nd General Assembly (2016), the apology was delivered during a renewal and healing event.

“We didn’t just come to apologize,” Nelson said. “We came to build a much stronger relationship.”

He added, “It’s our intention to bring this family together, to call people into relationship with one another and to stand firm in the differences wherever Christ Jesus has set us free to be who we are and whose we are, brothers and sisters in faith, crossing boundaries, crossing lines and recognizing that we serve a God who is powerful and mighty and who can do all things.”

This official apology by the PC(USA) and the apology by the Presbytery of Yukon have led to the creation of a multidenominational Intergenerational Arctic Ministry (IAM) for faith-based trauma healing in Yukon Presbytery. Molly Pederson, a member of Utqiagvik Presbyterian Church and president of the IAM Board, said this initiative is just beginning.

“We are going to concentrate on healing from addictions because that seems to be the problem that has arisen from the trauma of long ago,” Pederson said, referring to church-supported boarding schools. “Being taken from parents and family to go to school away from home really had a bad effect on us. People turned to alcohol or drugs to try to deal with it. This ministry is going to try and help heal us.”

According to Pederson, the IAM Board is looking for volunteers willing to be trained to be listeners for a healing program called The Listening Way.

“We plan to train two people in each of the villages, and they will help their people and train others. Everybody is excited about it. We need prayers to find the right people to be listeners,” she said.

“We have a lot of people to recruit in each community and that’s a big task, but God has been faithful so far, so we are trusting that God will continue to be faithful,” Karns said. He added that he is hopeful because “we have the right pastor in Utqiagvik, we have the right mayor in the North Slope Borough, we have the right executives at the Arctic Slope Regional Corporation, we have the right people in leadership positions, that all at once it gelled — that’s a work of God.”

God’s presence in the area has been apparent for many years, according to a letter read at the renewal and healing event in Utqiagvik last year. Crawford Ahkivgak Patkotak, chairman of the ASRC, read the letter, written to Utqiagvik Presbyterian Church more than 40 years ago. The letter was written on behalf of the ASRC by Alaska Native leaders Joe Upicksoun, first president and chairman of the ASRC, and Edward E. Hopson Sr., brother of Eben Hopson, first mayor of the North Slope Borough.

It read: “Gentlemen, the 75th anniversary of your presence in Barrow is a great occasion for all the people of the Arctic Slope. The church has been a bedrock of our daily lives, primarily caring for our spiritual needs, but because its unique position in the Arctic has aided our physical and general welfare in many different ways over the years. … Your church sponsored the grant that allowed the Iñupiat people the wherewithal to pursue the Alaska Native Claims Settlement Act. This was a major act of faith by your church and the people you serve.”

After winning the land rights case, the ASRC returned the grant funds it had received from the Presbyterian Committee on the Self-Development of People with interest, so others could be helped.

“I believe it really was sowing a seed into our people, and once that act was passed, we were able to build off that,” Patkotak said. “ASRC has become the largest privately owned corporation in the state of Alaska, and for that we are eternally grateful to our heavenly Father and to the Presbyterian Church (U.S.A.).”

The Iñupiat way of life 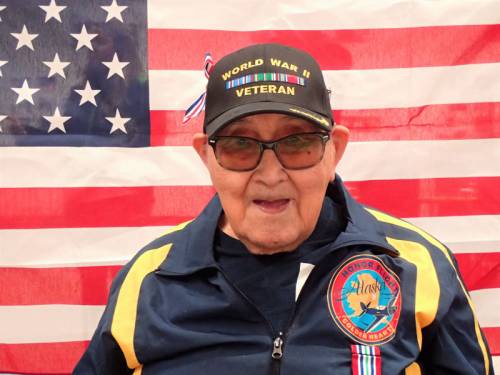 Love and respect for elders and for one another underscore the values than have guided the Iñupiat Eskimos’ way of life in the Arctic for thousands of years.

There is, perhaps, no Iñupiaq elder in the eight villages of Alaska’s North Slope Borough who is more highly respected than 92-year-old Wesley Ugiaqtaq Aiken, the oldest member of Utqiagvik Presbyterian Church and a veteran of World War II.

Aiken was born in Barrow, Alaska (now Utqiagvik) in 1926. Until his family moved back to Barrow when he was 12, he lived near Cape Halkett, along the Alaskan Beaufort Sea coast, and learned to hunt seals and maneuver the sea ice as a young boy.

“When I was young, I was a reindeer herder,” Aiken said. “At that time, I saw old people who could no longer hunt, so I started giving some of the food to them.”

Aiken started whaling at age 14 and later became a whaling captain to help provide food for the entire community. Today the act of giving is coming back to Aiken.

“I am 92 years old and can no longer hunt, but young hunters and fishermen share their food with me,” he said.

Aiken says that what he loves about his home is the tundra. “It has no trees to block you from seeing anything. You can spot caribou with binoculars from a long way,” he said.

As a young man, Aiken helped build houses for Alaska Natives through a grant program of the Bureau of Indian Affairs. He built his own house, using a hand saw and no electricity.

During WWII, Aiken volunteered to serve the U.S. Army as a member of the Alaska Territorial Guard (ATG). Two years ago, at age 90, he volunteered to be trained as a tribal veterans representative to help fellow ATG veterans with the application process to receive state and federal benefits.

Aiken remembers that Utqiagvik Presbyterian was the first church in the community until other churches were established in the 1950s. He said his favorite hymn is “Jesus, Tender Shepherd, Hear Me,” and his favorite Scripture is John 3:16.

“It was the first verse I learned as a little boy,” he said. “It took me a while to understand what it meant, but I do now.”

In June, the Northwest Chapter of the National Academy of Television Arts & Sciences presented an Emmy Award to the Arctic Slope Regional Corporation for its documentary, “True North — the Story of ASRC.” The film shares the story of the company’s early leaders and the values of the Iñupiat people of Alaska’s North Slope. Watch the film: