The PC(USA)’s Season of Prayer and Reflection in the Korean Peninsula runs through Aug. 15 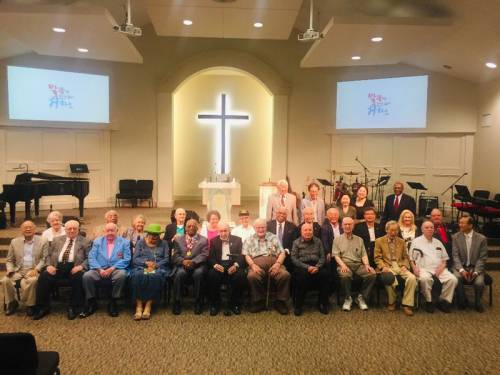 Korean War veterans and their families were invited to worship Sunday at the Korean Presbyterian Church of Indianapolis, Ind. (Photo by Kiheon Cho)

On Sunday, June 23, Korean Presbyterian Church of Indianapolis, Ind., invited Korean War veterans and their families for Sunday worship and fellowship following the service. The Korean church has observed Korean War Commemoration Sunday annually for over a decade, giving thanks for the sacrifice of those who fought on Korean soil.

Many people don’t realize how little distance lies between the two Koreas. What would take only a few hours in a car — Pyongyang and Seoul are 121 miles apart — has divided the two nations separated for more than seven decades. In a sermon preached at the church on June 23, I shared the story of a Korean War veteran whose family told how their father revisited modern-day Korea and had stood by the confluence of Han and Imjin rivers remembering his own baptism — and how some of his army friends lost their lives trying to cross those rivers while under fire.

In the waters of baptism, we experience the death and resurrection of our Lord Jesus Christ. Romans 6:3-5 reminds us to be buried with Christ in baptism and to be raised to new life. Baptism also teaches us about being washed for cleansing and forgiveness. As Korean War veterans are aging, many have crossed the river once more. Some are preparing to enter the river again, a colder river this time. 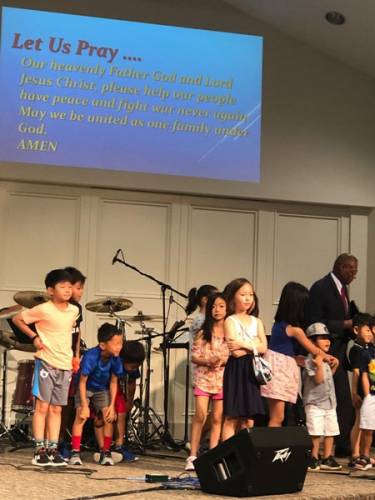 Tine Martin, commander of the Central Indiana Chapter 259 of the Korean War Legacy Foundation, says, “Our numbers are down. We had about 80 but now we are down to 25. The chapter closed last year because we couldn’t meet anymore.” Another veteran, Thomas Shepherd, says, “We love coming here to this church. It is like coming home again. Lord don’t take me home, I will come again.”

Guy Miller was 19 years old when he went to Korea. He shared a brief testimony during worship saying, “Happy to see you teach the children about the war.” Herbert Spann, church staff for outreach, asked the children, “When did the war end?” No one could answer. A prayer was offered asking God for war to never happen again.

The Korean Presbyterian Church of Indianapolis is a vital congregation, with about 200 in attendance on a typical Sunday. The Rev. Hyung Howard Kim is the church’s solo pastor. Ruling Elder Kiheon Cho informs the war veterans and families who are invited not only in June, but also on the first Sunday in January to share the Korean custom of new year’s traditional bow. The church also extends an annual invitation for Korean adoptees to share cooking demonstrations and musical events.

There are many stories remembering the “Forgotten War” by Koreans of Diaspora in the U.S.  The Gospel Coalition is warning its readers about nine things it believes they should know about North Korea. On the contrary, five years ago the World Council of Churches posted hopeful signs and more than a dozen recommendations after having an ecumenical meeting of representations from both North and South Korea. The postings represent two of many approaches, sentiments, and methodologies for easing tension in the Korean Peninsula. It is up to the reader to judge what needs to be done for peace and reconciliation for the two Koreas and the world. 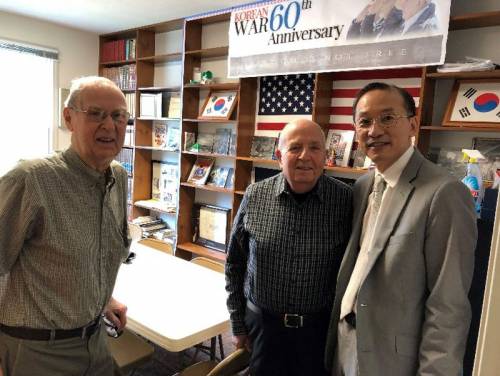 Korean Presbyterian Church in Indianapolis, Ind., installed a “Wall of Remembrance” at the church six years ago. From left are Herb Potter, David Petrie and Paul Huh. (Photo by Kiheon Cho)

The Season of Prayer and Reflection on the Korean Peninsula begins on June 25 and runs through August 15. On Aug. 15, 1945, both Koreas gained their independence from Japan following the end of World War II. Immediately the Soviet Union occupied the north and the United States took the south. Ever since, the two Koreas have been divided; however, the hope for peace cannot be forgotten. And prayer continues to allow for that hope.

The Rev. Dr. Paul Junggap Huh is a Korean translator in the Administrative Services Group, part of the Presbyterian Church (U.S.A.) A Corporation. Being a musician and having specialized in Liturgical Studies, he serves Harvey Browne Presbyterian Church, Louisville, Ky., as a parish associate.