Man behind program to alleviate hunger in Cameroon dies

LOUISVILLE – The people of northern Cameroon are mourning the recent passing of Elias Gondji, the architect behind a food program that has made a significant impact in communities dealing with drought and hunger issues. Gondji worked with RELUFA, a nonpartisan network of ecumenical and secular nonprofit organizations and churches. 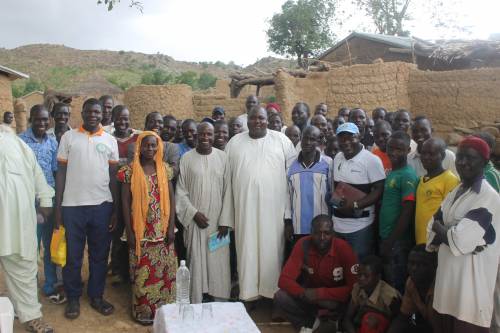 For years, the network has created strategies to address the systemic causes of poverty, hunger, and environmental injustice. Working with RELUFA, Gondji designed a cereal bank concept that allowed communities to survive lean growing seasons. He had also started a related organization, GIE ADERSA, and had been working with RELUFA and organizations like the World Food Program to address food security issues.

“Elias advised building a program that would not distribute food to communities, but make it available for them for loan during the lean season and pay it back during the next harvest,” said Valery Nodem, associate for international hunger with the Presbyterian Hunger Program (PHP). “That system, Elias believed, would give back a community’s dignity and build a system from the bottom up.”

Nodem says Gondji was inspired by his father’s ministry with the poor and most marginalized.

“He devoted his entire life helping communities to become self-reliant, and worked tirelessly to draw attention to issues faced by communities in the northern part of the country and bring development in the area,” Nodem said. “With RELUFA, Elias contributed to the construction of 45 granaries in far north Cameroon, which have been well managed and operational for more than 10 years.”

Gondji was a respected leader in the northern region and was elected a member of the Cameroonian parliament 10 years ago.

“Despite his new status in the country, he never forgot his poor origins and never left his village. He continued to look for solutions to respond to the many crises affecting the region, whether it was economic, social, or political,” said Nodem. “His passing leaves a great vacuum in the communities he served and the whole region.”

Nodem recently visited Cameroon to meet with church partners and to find out how they plan to move forward in the wake of Gondji’s death. He said the communities managing the granaries have decided to build on Gondji’s legacy by expanding the program and inviting other communities to start their own granaries.

“It’s remarkable to see how, with minimal supervision and with all the restrictions imposed by the presence of the terrorist movement Boko Haram, communities have maintained the vision of the granaries as a sustainable way of alleviating hunger,” he said.

While in Cameroon, Nodem witnessed the inauguration of two new granaries built by RELUFA and other partners, and watched as communities officially received their stock of 60 bags of cereal to start the granaries. Eight Presbyterian congregations in the United States recently supported the construction of two new granaries and the purchase of 250 bags of cereal for the new communities joining the program.

“I’ve witnessed a great enthusiasm from communities joining this initiative,” Nodem said. “There were conversations about what made the program so successful over the years: strong local committee to manage the whole operation, participation by community members, and external monitoring.”

RELUFA is looking to raise funds to build three new granaries, raise funds to pay for one field agent, and purchase a motorcycle for the new agent to travel between the 45 communities.

“Through the years, in addition to the 45 granaries, 31 storage units have been constructed and the system is still working well,” said Nodem. “Most granaries have managed to increase their stock and support members of their community during difficult times. Community residents say the availability of food has allowed them to take care of other family needs, such as education for their children and better health care.”

Nodem says plans include bringing all of the granaries together as a federation to better defend interests and to engage in conversations with decision makers about food security issues and development needs in the area.

The granaries were started with the support of the Presbyterian Hunger Program and Presbyterian Disaster Assistance. Over the years, the support of congregations and presbyteries has helped to grow and sustain the program. Nodem says PHP will continue to promote the granary project and connect that ministry with congregations and other groups that want to get involved in projects that are making a difference. If your congregation is interested in learning more about supporting projects like RELUFA, contact PHP at php@pcusa.org.