It may well be that ‘Glenn is calling heaven to dance’ 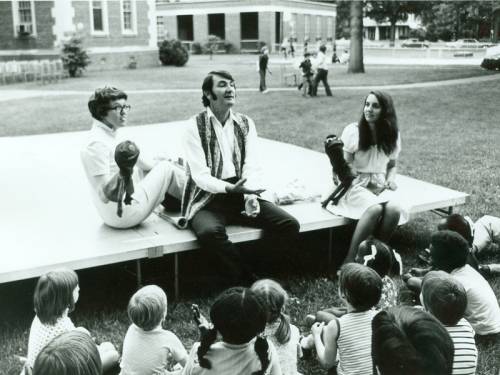 Bannerman taught at PSCE from 1958-89, when he and his wife Evelyn moved to Montreat, North Carolina.

“By the time I met Glenn he had already retired from his illustrious decades teaching at PSCE,” said the Rev. Dr. Brian K. Blount, president of Union Presbyterian Seminary. “I did not have the privilege of working with him when he was a fulltime professor, but I came to know him well. Know his love for the church. Know his desire that the church see and experience the full joy of God’s Creation. Know his passion that church leaders be able to teach and practice that joy through not only worship, prayer and study together, but also play together.”

“It’s revolutionary, really,” Blount said, “how Glenn took the symbols and tools of business and fashioned for them an integral role for recreation. What was intended for work, Glenn repurposed for play. … I still remember students giggling and myself marveling as I entered one of Glenn’s Recreation Workshop classes in the basement of the Early Center. They were crafting. Making extraordinary recreational tools and toys from innocuous household items like pantyhose.

“He invited me to sit and listen. And he and his students opened up a wonderful world of engagement, of using Scripture, theological perspective, familiar and not so familiar games, common and not so common domestic and workplace objects to structure play, to communicate creative crafting, to build community, to teach the presence and movement of God’s Spirit with us through the way we joyfully encountered God’s Creation and the people who are part of that Creation with us. Play was play for Glenn. But play was also, for Glenn, theology. At the bottom of the recreation theology he was teaching was some very serious fun.”

Originally from Hopewell, Virginia, Bannerman received his bachelor’s degree from Richmond Professional Institute, now Virginia Commonwealth University, and his master’s degree from Assembly’s Training School, which became PSCE. Following his retirement, he remained active in recreation and conducted leadership training and participatory events throughout the United States as well as overseas.

“As our community celebrates Glenn’s life by remembering Glenn’s story,” Blount said, “I will cherish key moments where I had the honor of living particular pages of that story.” The Bannermans visited Richmond, Virginia, shortly after Blount and his wife, Sharon, began their time at Union Presbyterian Seminary, “driving all the way from Montreat with the express welcoming purpose of taking us out for a meal at their favorite seafood restaurant,” Blount said.

Blount also recalled “Glenn and Evelyn sitting side-by-side in those recreation workshop classes surrounded by seminary students intensely studying play. Glenn welcoming my wife and daughter to a barn dance at Montreat, introducing my introverted daughter by name to the entire camping community, and calling her like the voice of God onto the dance floor. Glenn telling me that wonderful story of how he was invited to come teach at PSCE for a single academic year. And when the year was over, and the next academic year started, since no one told him not to come back and teach, he came back and taught. And kept doing that and doing that for 31 years.

“Glenn calling the dance on the campus of Union Presbyterian Seminary, at Lingle Hall, after the alumni luncheon during one of the Sprunt Lectures. Glenn speaking with me about his unrelenting love for PSCE and the theological, recreational education bestowed upon him that he felt called to share with generations of students. All such memories, and so many more, I shall cherish.”

Bannerman was the author of “Brite-Tite Book o’Fun” and the co-author of “Guide for Recreation Leaders” and “Recreation with Dance, Movement and Music.” He received the Trustee Award from PSCE, was the Association of Presbyterian Church Educators’ Educator of the Year in 1989 and won an E-Chievement Award for making a positive difference in his community and beyond from the National Public Radio Show “E-Town.”

“I suspect that as the days go by we will all have stories to share in what will no doubt ultimately be a wonderful repository of Glenn Bannerman recollections,” Blount said. “The stories will no doubt bring as much joy as Glenn himself did. Perhaps the last great Glenn Bannerman story is playing itself out even now. In transcendence. Even as God has called Glenn to heaven, I can’t help but believe that Glenn is calling heaven to dance.”