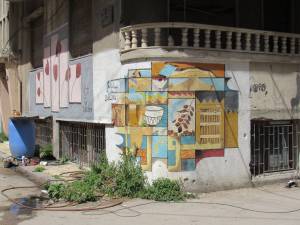 The city of Homs and the art painted in the streets by residents after they returned from three years of exile while extremists held the city. About 400 families have returned so far and say they don’t plan to leave again. —Scott Parker

It is estimated that more than 250,000 Syrians have died since civil war broke out in the country five years ago. Another seven million are displaced. The United Nations and other world organizations say the crisis has set Syria’s development status back by four decades.

While more than four million people have left Syria for other countries, those that remain hope to one day see their country at peace and thriving. Presbyterian Disaster Assistance, in partnership with the National Evangelical Synod of Syria and Lebanon (NESSL) has been helping Syrian Christians rebuild their homes through a $100,000 grant.

As part of her visit to the Middle East, PDA Coordinator, the Rev. Dr. Laurie Kraus joined other organizations for a conference in Lebanon, followed by a visit to Syria where the PDA dollars are at work restoring life to the city of Homs.

“We met with hundreds of people displaced from Homs and other towns and cities in Syria who had either been threatened or were forced to leave by ISIL,” said Kraus. “I talked with families that had been there for five years. They left during the initial fighting in Homs in February 2012 and haven’t gone back.”

Kraus met with a displaced couple who had resettled in the Christian Valley of Syria. The man is a dentist and recently opened a practice in his new community. Both say they are not stigmatized but do not feel fully received by the community. However, there are challenges to returning to life in Homs.

“There are concerns about reestablishing a viable work life in Homs because the city and its economy are still very fragile,” said Kraus. “There are many many buildings and apartments in Homs that are not rebuilt, on blocks that remain filled with rubble and empty of people. Do they go home to a rehabilitated apartment or do they stay where they have work and their children are in school? There’s a tension either way and it is not a simple homecoming story. Further, many families experienced trauma as they endured assaults on Homs and eventually fled, and those feelings linger, making a decision to return more complicated.”

Kraus and the rest of the team heard similar stories through out their visit as people struggle with remaining in a devastated community or seeking to start anew in another city or country.

“It reminds me of many families that fled New Orleans after Hurricane Katrina. Some had to move to other states and never came back,” said Kraus. “So there’s a whole layer of story and pathos unfolding around hard choices they’re still going to have to make about where they want to invest their lives and try to re-create healing and wholeness for themselves and their families. It’s not an easy decision.”

In her talks with community leaders and residents, Kraus said there is a common belief and commitment from Christian, Orthodox and Muslim faiths that Homs must be restored. She says the interfaith groups believe that a multi-religious cultural environment is very important to the recovery and stability of Syria. 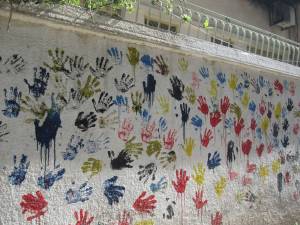 The city of Homs and the art painted in the streets by residents after they returned from three years of exile while extremists held the city. About 400 families have returned so far and say they don’t plan to leave again. —Scott Parker

While touring the devastation in Homs, Kraus saw the impact of the bombing and shelling on the religious community.

“You’d walk down the block and see a wrecked church or Orthodox communion and mosque, all within steps of each other,” she said. “Apartment buildings looked like pancakes after being leveled by the bombing.”

Despite the devastation, a few families at a time, are beginning to make their way back into their restored apartments.

“One family’s flat had been completely restored while the one next to it was still in ruins. Most of us wouldn’t go back into a building where there were no other restored apartments, especially when the building next to it could collapse at any moment,” she said. “But people are going back into buildings like this. They are making a commitment to rebuild flat by flat, house by house.”

Kraus talked with one couple, an engineer and a pediatrician, who had returned to their home and were the only ones living in their block.

“Their block is dark at night. There is no one else in their building or on their street,” Kraus said. “The wife goes out at 3:00 in the morning to make house calls on children. They’re living like pioneers at a frontier outpost. They are living there because they believe it’s the only way to bring back their city.”

Kraus says she’s deeply moved when she thinks about what these families and communities are giving up in order to rebuild their life in Homs. But people are coming back. They’re going to school and they’re teaching.

“I met with an elder after church who was so proud when he shared about his son who is a high school senior,” she said. “Many young people want to leave the city when they can, but his son wants to stay and go to school in Syria so he can help people come back and build a life. A lot of people have given up on Syria but they haven’t seen the people we’ve seen who are just working day and night to make it happen. We want to work with this community to continue the rebuilding, which we believe Presbyterians will be generous in supporting.”

To support humanitarian response in the Middle East, give to account number DR000081. For more information, click here.

Presbyterian Disaster Assistance is supported by your gifts to One Great Hour of Sharing.