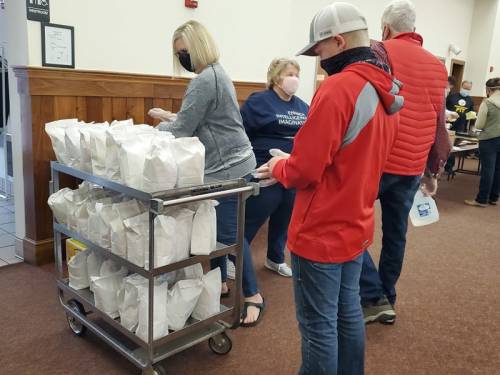 LOUISVILLE — While Sunday morning worship and congregational fellowship, not to mention Circleville’s annual Pumpkin Show — in that priority order, of course — would normally have brought the members of Circleville Presbyterian Church together this fall, these are strange times.

“We have not started worshiping in person again since the pandemic began,” said Carla Mavis, a ruling elder and clerk of session at the Circleville Church. “In Ohio, because COVID is unfortunately exploding again, it looks like it’s going to be a while before we feel safe enough.”

And yet — as is currently the case across much of the PC(USA) congregational landscape — members of the church longed to be together.

And, beyond that, as a Four for Four congregation — meaning a church that receives all four of the Special Offerings mandated by the General Assembly — they wanted to continue to give generously to benefit “the least of these.”

“For me, the Special Offerings are very important,” Mavis said. “After being a commissioner to General Assembly a couple of years ago, I realized how broad the reach is of those offerings. I recognize how far your money can go and how many people can be helped who are not necessarily in your town, but across the world. That makes it so much more important for our kids to understand that the pennies they collect at the One Great Hour of Sharing actually have a wider impact.”

Because Circleville Presbyterian, like most PC(USA) congregations, was not able to meet in person on Palm Sunday or Easter, the traditional times when One Great Hour of Sharing is received, the church’s offering was considerably less than expected.

“When this pandemic struck, it hit right at One Great Hour of Sharing time, which was very difficult, and we did not do very well,” said Mavis. “I decided that if we were going to make these offerings part of being a Four for Four church, we were going to have to do something that was outside of the box — something that would give them a reason to give to the church. That’s where the idea of the lunches came in.” 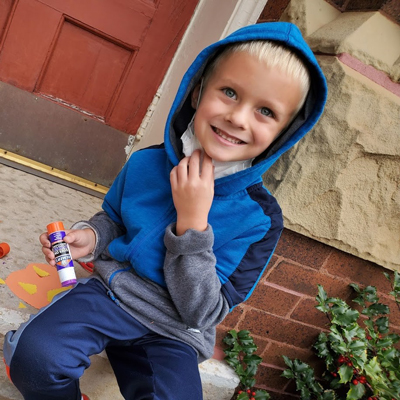 Because the Peace & Global Witness Offering is usually received on World Communion Sunday, which this year fell on October 4, Mavis — who is the congregation’s volunteer Christian education director as well as a retired schoolteacher — sprang into action. She gathered the church’s children and youth to pack sack lunches with a sandwich, an apple, a bag of chips, literature on the Peace & Global Witness Offering and a famous Circleville pumpkin donut, which were all distributed in drive-through fashion in the church’s parking lot.

“Circleville is a big pumpkin town,” said Mavis, referring, in part, to one of the nation’s largest and oldest pumpkin festivals held annually in Circleville, which was canceled this year because of COVID. “Because we didn’t have the Pumpkin Show this year, that was another reason it was fun to get together.”

For the youth and children’s portion of the fundraiser, Mavis had set up socially-distanced assembly stations throughout the church’s large fellowship hall, where the younger youth decorated the lunch bags with pictures and messages and the older youth packed the lunches. Everyone who participated was gloved and masked for safety.

Once the assembly was completed, volunteers placed the lunch bags on a cart, wheeled it outside, and handed out the lunches as people drove through beneath a large overhang and portico on the side of the building.

Since Mavis knew what was in each lunch bag, she had made a suggested donation amount that was roughly twice the cost of the contents, so that there would be a good source of revenue to benefit the Peace & Global Witness Offering.

Across the U.S. and around the world, the Peace & Global Witness Offering supports empowering ministries that work for reconciliation and facilitate healing. Half of the offering goes to the national church to address these issues around the world. Twenty-five percent is retained by congregations for local peace and reconciliation work, and 25% goes to mid councils for similar ministries on the regional level.

“Our members all knew that the money was going to Peace & Global Witness,” said Mavis. “That was part of the publicity so that people wouldn’t think we were just going to put the money in somebody’s pocket somewhere. People were very generous. They paid much more than the suggested cost for these lunches.”

Like many congregations, Circleville Presbyterian has a large number of older members to whom meals are regularly delivered. “For that reason, we asked them to pre-order their sack lunches so that we’d be sure to have enough,” said Mavis, “but when I offered to have volunteers deliver the lunches to them, many of them said, ‘No, I have to drive through myself because I want to see everybody.’” 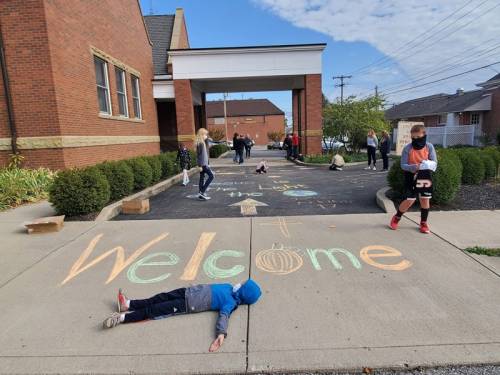 Mavis said the resulting distribution was like a little parade, where everybody waved and cheered. The children had chalked the whole driveway, wrote messages and drew pumpkins — of course — where the people pulled through.

“They all got their friends to drive or they drove themselves through the line so that they could see the kids and the younger families,” she said. “It was a fun afternoon, a little respite from everything that’s been going on.”

Reflecting upon the event’s success on several important levels, Mavis was gratified that the drive-through lunch’s goals of having the church get together — and give together — were accomplished.

“And isn’t coming together what the Special Offerings are all about,” said Bryce Wiebe, director of Special Offerings for the Presbyterian Mission Agency. “A great way to witness to Christ’s peace and to encourage people to come together.” 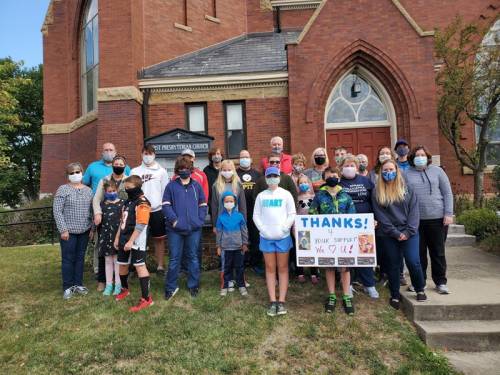 Give to the Peace & Global Witness Offering to continue the valuable ministry of the Peacemaking Program and to support the peace and reconciliation work of church partners through World Mission.

Congregations can receive each of the four churchwide Special Offerings on any Sunday during the year when it feels appropriate to be engaging in the ministries they support.