Education and advocacy are on the holiday menu 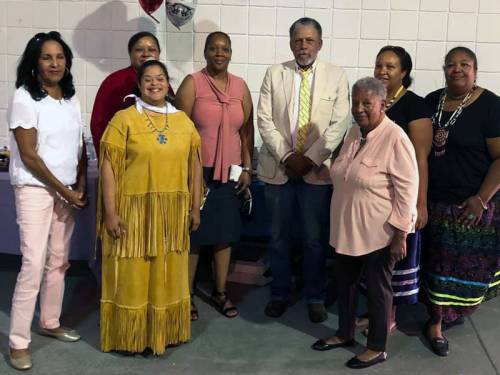 Tucked away in the archives of Long Island’s East Hampton Library is a fading photo of men and women sitting down to a festive meal. The caption reads: November 19, 1953, just one week before the traditional Thanksgiving Day, the Indians of Shinnecock Reservation celebrated their first “Indian Thanksgiving” in many years.

The grainy piece of history tells those peeking into the past that more than 100 members of the Shinnecock Indian Nation of Southampton, New York, were once enjoying a tradition that had fallen by the wayside. As non-Native Thanksgiving fare like stuffing and green bean casserole were passed along with Native dishes that included oysters from Long Island’s waters and samp — beaten and boiled corn served hot or cold with milk and butter — they remembered, too, the real reason for this gathering.

It wasn’t a nod to the romanticized “first Thanksgiving” of the Plymouth Colony’s Pilgrims and Indians breaking bread together that has been taught to schoolchildren for more than a century. Rather, the Shinnecock Indian Thanksgiving was created out of necessity, as the photo caption explained: In the old days the Indian women were always in such demand by the local women of Southampton for Thanksgiving Day cooking. So, to properly enjoy their own dinner, they had it a week earlier.

After the meal, the caption continued, “several old timers” were grateful to share stories of their early experiences on the Shinnecock reservation. The younger members of the tribe were grateful, too, as they “expressed the desire to keep the custom alive by observing the Indian Thanksgiving in years to come.”

The Shinnecock Indian Nation, which didn’t receive official tribal recognition until 2010, has done just that. According to the Rev. Michael F. Smith, the Indian Thanksgiving, held a week before the national holiday, is “going strong.” Smith knows this as he himself is quite familiar with the dinner.

The Shinnecock church is where Smith’s mother instructed the junior choir. It’s also where he credits his public speaking skills to the “many times I read Scripture during worship.”

Much to his chagrin, Smith’s life took him down the ordination path, becoming a minister in the Presbyterian Church (U.S.A.). After being ordained in 1983 by the Presbytery of Grand Canyon in Phoenix, and serving early in his ministry in Tucson, Arizona, Smith found himself packing his bags and heading back east to Southampton.

Smith recalls the story of how Shinnecock church elders spoke to him about being the pastor. “The church was without a pastor for a while,” said Smith. After telling the elders he would think about it, a letter soon came from the Presbytery of Long Island, congratulating him on his position at Shinnecock Presbyterian. “I guess I was heading home,” he said, laughing.

Smith returned to his ancestral roots of Shinnecock, serving the church as pastor from 1985 to 2018. He currently remains committed to the community in his retirement, especially as the small church is once again without pastoral leadership. Part of his commitment is keeping the Shinnecock presence — and traditions — alive, including the Indian Thanksgiving.

Today, though, the gathering is referred to as the Nunnowa Community dinner. Nunnowa is Algonquin for “the time of harvest.” The dinner is held in the Shinnecock Cultural Center, allowing room for traditional dancing as well as copious trays holding both traditional non-Native and Native Thanksgiving food. Funded by Shinnecock Presbyterian and the Shinnecock Tribe, it is only one of many “thanksgivings” of the Shinnecock nation.

“We might come together on the Thursday prior to the nation’s Thanksgiving Day to celebrate the goodness and grace of God, but in reality, every day is a day of Thanksgiving,” said Smith. This emphasis on giving thanks always — and in all circumstances — was evident during the height of COVID-19.

When the 2020 Nunnowa dinner was canceled due to the pandemic, the Shinnecock Native American Cultural Coalition recorded a “Nunnowa and Prayer” video. The short clip was used to tell the story of how the fall celebration came to be. In the telling of this story, Nunnowa has not only become a harvest celebration, but a time to remember the truths of the past that often get lost in the translation of time.

Every year as fall approaches, there are two things that Native Americans can count on: the changing colors of leaves on the trees and the requests from media searching for a quote for the obligatory “How do Indians celebrate Thanksgiving” story.

“The stories about correcting the Thanksgiving myths and showing interest in recognizing the Indigenous experience have usually taken the form of interviewing Native leaders in the church,” said Elona Street-Stewart.

Street-Stewart, a ruling elder and synod executive with the Synod of Lakes and Prairies in Eagan, Minnesota, is currently serving as co-moderator of the 224th General Assembly (2020) of the Presbyterian Church (U.S.A.). She is also a descendant of the Delaware Nanticoke tribe.

While such stories seem innocuous, they don’t do anything to further the work of educating non-Natives on the urgent needs of the more than 5.5 million Indigenous people, from more than 560 Indian nations, who live in the U.S.

“Asking us what we think about Thanksgiving has been the common approach for at least a decade. We are contacted and invited to contribute our ideas, but it doesn’t sound like anyone has listened because it is repeated the following year,” said Street-Stewart. “Such stories are terribly predictable.”

Echoing Smith’s words that the nature of giving thanks is not relegated to a day in November for Native Americans, Street-Stewart adds, “With hundreds of tribal nations on this continent, there was never a universal Thanksgiving holiday the third week of November.Our communities had their own seasons of ceremony directly related to the world around them.”

One such example is Shinnecock Presbyterian’s June homecoming. Held the first weekend of the month, homecoming is a much-loved tradition that brings families and friends near and far back together again. Smith says that before the advent of cars, “a sizable crowd would come as far as Queens by horse and buggy.”

To non-Native Presbyterians, the June homecoming might look like the strawberry festivals that white churches have held for years. While the strawberry is a centerpiece in the Shinnecock celebration, it is not due to any white influences. Rather, the strawberry has been part of Indigenous cultures, symbolizing one of the first fruits of Creation, thus, the return to life after a long winter. Homecoming is, Smith says, a spring Thanksgiving, a time to give thanks for the lives of those who have passed during the winter and to celebrate the promise of hope blooming again.

So, when media comes calling, asking how Native Americans celebrate Thanksgiving, what Thanksgiving is being asked about? Is it thanks for the fall harvest or spring renewal?

For Street-Stewart, what she would like to read in the media is not how Native Americans celebrate November’s Thanksgiving, but rather how non-Native families are “changing their celebrations, creating a response to support Indigenous communities and showing a new appreciation for truth-telling this time of year.”

While many Presbyterian Thanksgiving services still focus on interfaith or ecumenical worship services, or encouraging congregations to count their blessings, there are some who are changing the Thanksgiving script.

At Oak Grove Presbyterian Church in Bloomington, Minnesota, Milissa Carter, an active member with the congregation for 10 years, wrote for the church’s blog last year a piece titled “Why Do We Celebrate Thanksgiving?”

In it, she defined the familiar terms heard in the Thanksgiving narrative: for example, “pilgrim,” defined as “a person who travels to a holy place for religious reasons,” and “savage,” defined as “one who is aggressive.” Carter then asked, “What if we started switching out the terms for more accurate reflections on the characters in this story?”

She then offered alternatives. Rather than “pilgrim,” she suggested “colonizer,” defined as “a person who helps take control of an area or a country that is not their own, especially using force, and sends people from their own country to live there.” And in lieu of “savage,” she suggested using “native,” defined as “someone connected with the place where you were born and lived for the first years of your life.”

“The stories we tell — and how we tell them — matter,” said Carter.

“My husband has a mixed background — Black and Indigenous. His experience brought to the forefront for me the need to create a more truthful Thanksgiving for my boys, who are now 14 and 12, what it means to be seen as a minority,” she added.

“There is so much information online when it comes to Indigenous traditions and recipes that there’s no reason for non-Natives not to be able to start crafting a more inclusive Thanksgiving celebration,” she said.

Carter also noted that history doesn’t reflect the stories of those who were conquered. Learning these stories is not about seeking to do away with beloved Thanksgiving traditions she grew up with. Rather, it’s about making room for both and deepening the understanding of who we are as a people today.

Carter, though, is not just adding more depth to her family’s holiday through stories and food. She is also providing an example for her sons as to what it means to be doers of the word.

Back at home, Carter says that as her boys get older, the truth-telling will become more age-appropriate, educating them on the injustices being faced today, among which include the growing number of Indigenous and Black girls who have gone missing without the same media attention or call for help as when a white girl goes missing.

“We have this tendency to protect our own stories, our own histories. I’m not sure if this is individualism we covet. But there is room for all our stories,” she said.

And just in case a little help in the forgiveness and grace department is needed, Smith is more than willing to mediate. The retired Shinnecock pastor is known for pulling aside new ministers at First Presbyterian Church in the village of Southampton, which has a “1640 Club” that boasts members who can trace their ancestry to the founding congregation. With a glint in his eyes, Smith tells the pastors that if the 1640 Club takes them to task, all they need to say is “I know someone from the 1639 Club.”

Donna Frischknecht Jackson is the editor of Presbyterians Today.