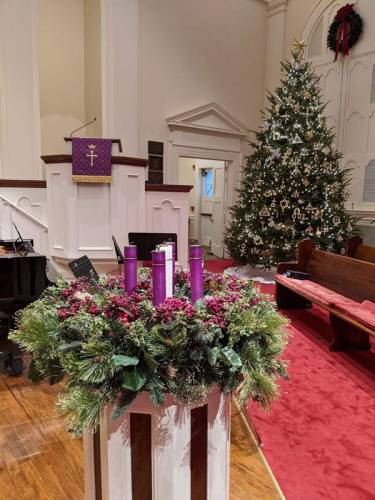 Chances are, somewhere in the country, in some Presbyterian church, there’s an old beat-up box marked “Christmas” stored in a basement closet or crammed into a corner of a balcony that has over the years gone from designated worship space to unofficial storage room.

Chances are, within that box are ornaments known as “Chrismons” — a word created by the blending of “Christ” and “monogram.” Made out of Styrofoam and embellished with gold sequins and glitter, the ornaments represent biblical symbols of faith such as crosses, stars and angels.

Chrismons were first introduced in 1957 when Frances Kipps Spencer, a Lutheran in Danville, Virginia, wanted decorations that were appropriate for her church’s Christmas tree. One can only imagine what secular ornaments were being hung on the church boughs that would lead Spencer to her idea.

The Chrismons craze soon took over, and not just in Lutheran circles. Throughout the following two decades, the making of Chrismons was often a churchwide event in mainline denominations. Lisa McBane, a member of First Presbyterian Church in Statesville, North Carolina, fondly remembers the ornaments that hung on the church’s tree when she was a child.

“I remember wondering what each symbol meant,” she said. Many in the church today not only wonder about the meaning and the origin of these ornaments, but also wonder what to do with them as they begin to fall apart with age. “Styrofoam and glue disintegrate over time, especially if the ornaments are stored in attics,” said McBane.

For First Presbyterian, though, it wasn’t the ravages of time that led to the decision to create new Chrismons. Rather, it was a flood a few years back. Somehow in the tossing of waterlogged boxes, the Chrismons were inadvertently thrown away — a realization that hit just a week before Thanksgiving, just as Advent was about to start.

Project Chrismon quickly got underway, with all hands on deck feverishly cutting out Styrofoam shapes and gluing on sequins. The goal was to have at least some Chrismons for the church tree. After all, it was a tradition. “We were gimping along, though,” said McBane. Over time, new Styrofoam Chrismons were placed in a box and stored away season after season. They, too, would soon show signs of wear and tear. Two years ago, when the comment was made that “we really have to work on these,” McBane and the church’s worship ministry leapt into action.

As Christmas 2018 faded into memory, First Presbyterian began planning for 2019. They wasted no time, beginning to research alternatives to Styrofoam Chrismons soon after the new year. The idea of needlepoint and cross-stitched Chrismons was discussed, but it wasn’t until their investigation led them to a Chrismon-only store called Rufty’s in Salisbury, North Carolina, that the worship team found what they were looking for.

“We fell in love with the designs that were made out of wire and beads,” said McBane. The Chrismons come in kits that start at $100 and include all the materials. “We could have outsourced the material, but it was a lot easier to have everything in one kit,” said McBane.

To offset the cost of the kits, church members were invited to buy a symbol in memory or honor of someone. “We hung the ornaments in the church office window prior to Advent. We then assigned a price to each ornament. Once an ornament was claimed, it would be marked as ‘no longer available,’” said McBane. 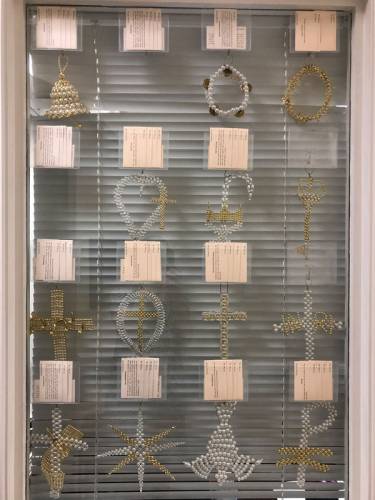 To offset the cost of the Chrismons kits, ornaments were made available to be given in memory or honor of someone. Courtesy of First Presbyterian Church

Each ornament is numbered in a special booklet and the name of the person honored or memorialized is then written down.

With each ornament taking anywhere from two to 12 hours, depending on the intricacy of the design and the skill of the person making it, First Presbyterian’s worship team wanted to make sure they were able to instruct others and signed up for tutorials at Rufty’s. When it was time to introduce Chrismon-making to the congregation, the worship team strived to get as many people involved as possible and scheduled workshops weekly, on various days and times, throughout 2019. The quilting group and youth group got involved. Choir members, too, found themselves not just practicing an anthem but crafting a Chrismon while they rehearsed.

McBane said it was wonderful seeing “the oldest of grandmothers to the youngest of children” get involved in making the Chrismons.

By the time Advent came, 200 ornaments were made. While not quite the goal of the 500 to 700 ornaments needed to sufficiently dress the 15-foot tree, it was enough, McBane said, to adequately decorate two-thirds of it.

While the making of the Chrismons created a multigenerational project for the church, it also led to a new worship service that the public was invited to.

According to McBane, the church doesn’t have a hanging of the greens service; it is more like a hanging of the greens workday. But to reveal the new Chrismons, a worship service was planned in which five designs were highlighted with the telling of what each one represented, along with a Scripture passage and a song. The ornament was then placed on the tree.

It was hoped to continue that service in 2020 and highlight another five Chrismon symbols. But with COVID-19 safety precautions still in place, Advent and Christmas worship plans are still changing, McBane said. One thing is for sure: The 15-foot tree with the Chrismons will be glistening in the sanctuary. “We might not be able to be in the sanctuary together, but the tree will be there for people to come and look at it,” said McBane. In fact, First Presbyterian has had a longstanding and much-loved tradition of families taking their picture in front of the church tree.

“We are figuring out now how to make that happen,” she said. One thought is to have families sign up for a certain time to come to the sanctuary. They can enter through one door, come and see the tree and take pictures and then exit via another door, McBane said. It was a similar plan that was used in September when First Presbyterian held a “meet and greet” for its new pastor, the Rev. Jeremy Cannada.

No matter what is planned, chances are the greatest symbol of faith at First Presbyterian this season will not be found hanging on a tree. It will be the smiles in those pictures of Presbyterians who, in spite of the challenges, found a way to keep on worshiping and praising God in the season of light and hope.

Donna Frischknecht Jackson is editor of Presbyterians Today. As a pastor, she has seen her share of Chrismons in need of help.