Nothing can cancel the work of the Spirit 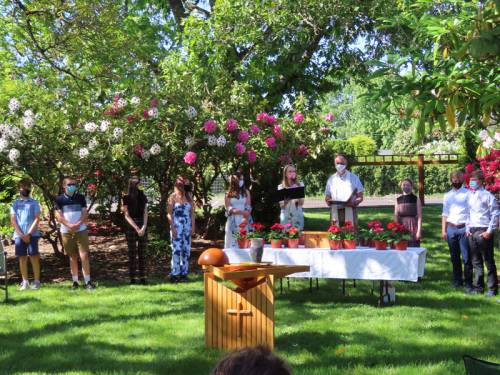 A pandemic couldn’t stop the Spirit moving among the congregation of Westminster Presbyterian Church which recently celebrated several confirmations, baptisms and the welcoming of new members. Courtesy of Marta Z. Ukropina

On May 16, 2021, though, something happened that was anything but typical: Close to a dozen youth were confirmed, more than a dozen children were baptized and several families moved from visitor status and became members.

After a year of ministry upheaval due to the pandemic, there was an outpouring of the Spirit — dare we Presbyterians even say “a revival” —  that was an unexpected gift from God. Make no mistake; this movement of the Spirit didn’t happen overnight. It was the result of the congregation listening to the Spirit and remaining faithful, even on those days when faith was even smaller than a speck of mustard seed.

When my husband, the Rev. David Ukropina, and I were called as co-pastors to the church of 260 members six years ago from Texas, there were not many families with young children and the youth group was dwindling. Westminster, though, recognized the direction in which they were going and sought to call a pastor to reverse the decline. This pastor would have a heart for children, youth and families. What they got was not just one pastor with such a heart, but two. My passion for youth, children and family ministry began when I was a child and youth in the church. David, however, became a Christian in his 30s, thus bringing a deep understanding of what those new to the church might be feeling.

“I can remember the hesitant feeling of coming to church for the first time. I didn’t know when to stand or sit, or what to do,” David said. “I believe that everyone who visits a church is looking for something, and I think churches often drop the ball with the people who actually walk through the door. As a pastor, I’ve helped update our website to focus on visitors, I’ve called visitors myself and I’ve made sure they are greeted and called after the service by parishioners.”

We would soon come to realize that ministry in Oregon would be different from what we had experienced in Texas.

“Religion, faith and attending church were part of the culture and fabric of life in Texas,” said David. “Church attendance was not a given in Oregon, especially among the family demographic.”

For the next several years, we and the congregation began a dedicated focus on welcoming families through new or “resurrected” ministries such as Vacation Bible School in the summer, Trunk or Treat during Halloween and an annual no-rehearsal Christmas pageant. There were also intergenerational fellowship events placed on to the calendar and an emphasis on equipping young people to help lead worship.

Eventually a new youth group was launched, one that did not overburden youth and families with a weekly schedule, but rather respected the limited time of teens and parents, opting for two to three gatherings monthly.

For me, imagination and adaptability were key priorities. I spent a lot of time communicating personally with parents to flesh out what their family was looking for in a church. What worked for some didn’t work for others, but there was a common desire to belong and to find a place where their children could experience God’s love.

At times, in the beginning, our children were the only ones in attendance, but we kept praying and trying. The church was dedicated to creating an atmosphere that welcomed busy young families. Over the years, there were setbacks and failures; but over time, families began attending the church on a more regular basis.

In August 2019, the youth group went on their first retreat. The ministry was growing by leaps and bounds. The fall began with great joy and anticipation as a group of young people and their parents met to begin their journey through confirmation. But this was no ordinary meeting. It had been years since the church last had a group of youth in confirmation, and this class included youth in both middle school and high school. 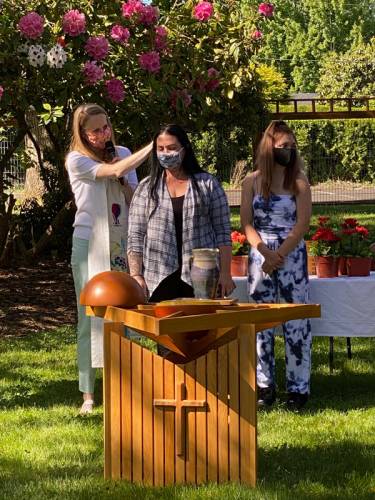 When the Ukropinas arrived at Westminster Presbyterian as co-pastors, one of their focuses was revitalizing youth and family ministries. Courtesy of Marta Z. Ukropina

Many of the youth and their families did not come with preconceived notions of what youth ministry or confirmation should look like. There was no “this is how we’ve always done it.” There was no institutional memory. There was just an overwhelming feeling of excitement and discovery.

As the year progressed, classes continued and relationships deepened. The teens began exploring what being a Christian and a Presbyterian meant to them. There was a focus on connecting the youth to the greater church community. Each confirmand even had their own little bucket in the youth room where mentors and other church members could leave them notes of encouragement or little gifts of candy and gum.

Many took advantage of this opportunity, and the youth felt surrounded by the love of their church family. Some of the men in the church, who were gifted woodworkers, made replicas of the cross that hangs in the sanctuary. They planned to give a personalized one to each confirmand on Confirmation Sunday.

And then, March 2020 happened and suddenly the world changed. Fear and disappointment surrounded everyone that spring as the growing list of cancellations hit people everywhere. But the Spirit was not canceled.

Throughout it all, the Spirit was there guiding, encouraging, moving and pushing the church to new places and ways of doing things. Like so many in our world, the church turned to other ways to stay connected, including weekly youth meetings on Zoom. Remarkably, the youth showed up week after week continuing to strengthen their ties as brothers and sisters in Christ even when they were unable to gather together in person.

Weeks went by and it became evident that confirmation would not happen in the spring of 2020 as planned. Spring soon gave way to a long, confusing summer of navigating how to do worship and have youth group. Taking advantage of the beautiful weather, classes were moved outside on the church’s garden labyrinth where youth could participate in person or via Zoom. This hybrid model continued as they finished their time of study.

With the turn in weather came the winter surge of COVID-19 and new, tighter restrictions. Each confirmation student attended a faith statement workshop on Zoom and began the work of expressing their own faith in their own words — a powerful exercise that became more so in the time of the pandemic isolation.

As spring 2021 began appearing along with the first flowers of the season, other parts of the country began easing COVID-19 gathering restrictions. This was not the case for Oregon. A new spring surge was upon the state. However, after delaying confirmation for over a year, it was time to move forward despite the obstacles.

It was a time of great uncertainty, and there was a fear that momentum had been lost after so much time apart. Although the church had still not reopened for in-person worship, the session approved an outside confirmation and baptism worship service. The Spirit would not — could not — be canceled.

Against the backdrop of the vivid colors of a decades-old rhododendron planted by charter members and a crystal clear blue sky, Westminster held a worship service like no other in May. After 15 months apart, the congregation was once again gathered, celebrating the call and claim of the Spirit. That day 11 youth were confirmed in the faith. Fifteen youth, younger siblings and parents were baptized, and several families moved from being regular visitors to active members. The church’s backyard was full of families and session members gathered to celebrate the gifts of the Spirit and claim or reclaim their identities as God’s beloved children. While all were still masked and physically distanced, there was still a feeling of unity and togetherness.

It was a true celebration of a very diverse community. Some who came were cradle Presbyterians, baptized as infants. Some had been attending for several years but were now ready to take on an active role. Others were new to the church, learning about God’s promises in baptism and confirmation for the first time. Parents came forward to receive the sacrament of baptism with their children. Everyone gathered there was celebrating the promises given to all of us in Christ. The service was recorded so that the whole worshiping community, those who opted to remain at home, could take part.

I must admit that I initially went into the outdoor service feeling a bit disappointed that the youth and their families were not able to look out into a sanctuary full of people, illustrating to them their incorporation into the Body of Christ — the Church. But as we began the worship service and all the young people, their families and members of the session were present, all of my doubts vanished. It was a thin space — the veil between heaven and Earth seemed transparent. It was a moment in ministry that will be ingrained in my heart forever.

Standing in the presence of God and the church as we baptized teenagers, parents and younger children in the middle of a global pandemic, which has been full of separation, suffering and fear, the phrase that came to mind was “surely God is in this place!”

I was not alone. Rising ninth grader Mikayla Irvin, who was baptized alongside her mom, younger sister and cousins, perhaps put it best: “When I am in youth group, I feel like I can be myself. It’s a place where we talk about God and we have fun. There are always laughs and giggles. I want to be a member of this church and get baptized for many reasons, but the main reason is to feel close to God and be with people who are the most respectful to me and are there for one another.”

After the service, people remarked how it was the most meaningful service they had ever attended and encouraged the church to think about always holding confirmation outside. There was something about being out in God’s beautiful Creation that reminded all who were gathered that they were a part of a larger story. The pandemic and all that time apart did not have the last word, nor did it dampen the joy and hope of confirmation or the claim of baptism.

Eighty-year-old Jack Maddex, a longtime church member, said he will always remember that day in May. “I feel very much blessed that I’ve now lived long enough to have seen a ‘mass baptism’ — or pretty close — in a Presbyterian congregation of which I’m a member,” he said.

As for us co-pastors, this we know: The Spirit will never be canceled. Dwindling numbers, the threat of a global pandemic and living in a world that is moving away from organized religion will never have the last word. The baptisms and confirmations that day speak to the Spirit of God at work in a time when there is a great decline in church attendance in the U.S. and many churches are wondering how they will emerge from the pandemic. The path into the future is never clear or certain, but anything and everything are possible with God.