Make A Donation Click Here >
Home › A place for pets 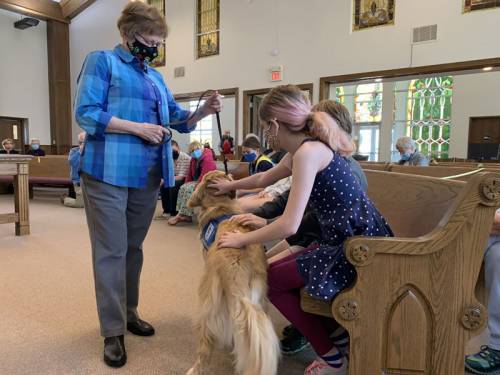 The first few notes of the postlude bellow from the organ. Peyton’s ears prick up. It’s a cue that the lovable service-dog-in-training has come to know all too well in his time attending worship at First Presbyterian Church of Red Wing, Minnesota. His gentle brown eyes look up at First Presbyterian member Jane Ward. He nudges that it’s time to leave. She smiles and takes the leash, letting Peyton do what he has been trained to do. He guides her out of the sanctuary.

For Ward, training golden retrievers to walk alongside those in need has become her personal ministry.

A dog mom for many years, Ward, who found it was getting too painful saying goodbye to her beloved pets, took her daughter’s suggestion to train service dogs and began working with Helping Paws, a local organization providing service dogs for veterans. It was an idea that benefited both Ward, who got to have a furry friend for an interim period, and the veterans who would then receive a faithful companion.

But when the time came for Peyton to graduate from his training and be placed with a new owner, Ward couldn’t help but feel a twinge of sadness amid the joy of knowing how the dog would bless another.

She approached the Rev. Heidi Bolt, who co-pastors First Presbyterian of Red Wing with her husband, Greg, and mentioned how an interim pastor had once done a blessing to commission one of her graduating service dogs.

“Heidi loved the idea,” said Greg Bolt, adding that Ward’s dogs have become part of the congregation. “They have a place here.”

The day of Peyton’s commissioning, the Bolts called several families to ensure that the children of the church were present to witness the special blessing of one of God’s creations.

With the help of various prayers in the Book of Common Worship for blessing animals, as well as those for commissioning humans to serve others, Heidi put together a liturgy for Peyton, which included a moment of the laying on of hands — by the children.

Reflecting on Peyton’s commissioning, Bolt realizes that his ministry “has sort of always been based on animals.”

At his first church in Oregon, the head of staff always brought his dog to work. The secretary would be prepared with dog treats in her desk drawer.

Pets in the pews

More and more, animals are finding a place in the church that doesn’t just include a pastor bringing Fido to sit at their feet in the office.

They are finding a place in the church beyond a Blessing of the Animals service, too — a service that has been growing in popularity among Presbyterians in recent years. While Presbyterians choose to hold such blessings anytime of the year, the Blessing of the Animals traditionally takes place around Oct. 4, which is the feast day of St. Francis of Assisi, the 12th-century patron saint of animals.

Clergy are seeing the request for animals to attend worship becoming more commonplace due to the growth not only in the use of service dogs, but in the number of emotional support animals.

It is important for churches considering welcoming animals into the sanctuary to know the difference between a service animal and one that offers support.

The Americans with Disabilities Act, which was passed in 1990, defines a service animal as an animal that has been individually trained to do tasks that are directly related to a person’s disability. An emotional support animal (or therapy, comfort or companion animal) does not qualify as a service animal under the ADA, as they have not been trained to perform a specific job or task.

According to information published by Church Mutual Insurance Co., because religious organizations are exempt from requirements for public accommodations under Section 307 of the ADA, houses of worship are not required by federal law to allow service animals on-site. However, other state laws may apply. Church Mutual advises churches considering allowing animals into the building to review insurance policies along with any state laws, and then compile written guidelines for the congregation.

Pets, though, don’t have to be physically present on a Sunday to be part of a family of faith. There are many other ways to include them in the life — and mission — of a congregation. 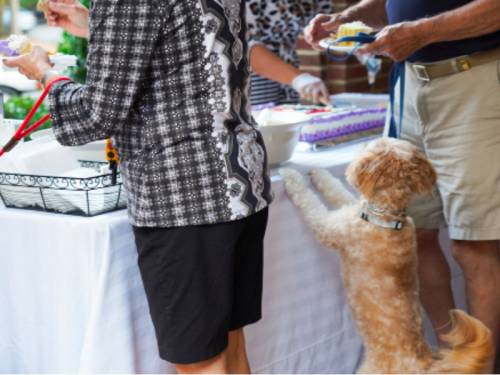 White Memorial Presbyterian Church in Raleigh, North Carolina, has woven the care for God’s creatures into every aspect of its ministries under the umbrella of its Companion Animal Ministry, an idea that then-elder Suggie Styres came up with in 2006.

“The mission of Companion Animal Ministry is captured in our tagline ‘caring for God’s creatures, great and small,’   ” said Chris White, who chairs the unique ministry. That care is ensured by having animals represented in all ministries.

For example, worship plans include special services for animals, such as a Blessing of the Animals service that began several years ago and has become one of White Memorial’s most popular services.

Mission committee strategizing includes such questions as to how best the congregation can walk alongside animals in need.

The meals for pets seem to be especially important. White explains that there are elderly people on restricted budgets that, when having to choose, will often use their money to buy pet food rather than much-needed medicine for themselves.

For its educational ministries, the church has added books to its library shelves on caring for pets or how to talk to children when a pet dies.

And what about outreach ministries?

This is where White Memorial Presbyterian excels, stepping in to care for members’ pets in times of need. White recalls a member who had broken an arm and needed help with walking her dog. Then there was another member who was in the hospital. “We had people go to the home to take care of the pet twice a day,” said White.

And then there was the young mother who died, leaving a distraught father, overwhelmed with planning a funeral service, who was grateful for the Companion Animal Ministry who stepped in to care for the family pet.

“This isn’t a pet-sitting service,” said White. “We care for members’ animals during a sickness, hospitalization, family death, etc. We go to their homes and walk the dog, feed the pets, scoop the litter, give medicine, play with them.”

And when a pet dies, the Companion Animal Ministry is there in the owner’s time of grief.

“Condolence cards are a big part of this ministry,” said White, adding that cards are sent when a pet joins a family as well. 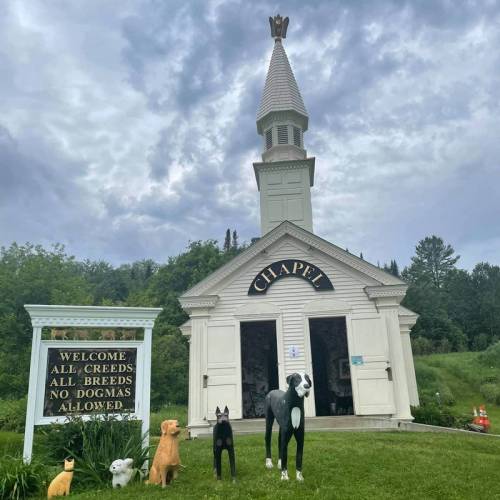 In Vermont’s Green Mountains, in a place known as Dog Mountain, stands a chapel just for animals. Created by the late artist Stephen Huneck, the chapel is a place for pet owners to say a prayer for and remember the pets in their lives who died. Courtesy of Dog Mountain

Nestled in the Green Mountains of St. Johnsbury, Vermont, is an early 19th-century iconic New England white clapboard chapel. The sign at the entrance reads: “Welcome. All creeds. All breeds. No dogmas allowed.”

Known as the Dog Chapel, the sanctuary is indeed a refuge for hearts grieving the loss of a pet.

The chapel was created by the late sculpture artist and author Stephen Huneck, who is noted for his woodcarvings of dogs.

Now a nonprofit sitting on Dog Mountain, where Huneck’s home and art studio was, the property boasts several trails for two- and four-legged hikers to explore.

It is the chapel, though, that is the main attraction with its stained-glass windows depicting man’s best friend with words capturing the best of what a dog is — love, joy, friend.

But before entering the small sanctuary, visitors are met with a remembrance wall overflowing from floor to ceiling with photos and love letters to deceased pets from around the world. It is a holy space and an important reminder that pet grief is valid grief. And it is a grief that is fueling the rise in a new breed of chaplains known as “pet chaplains.” 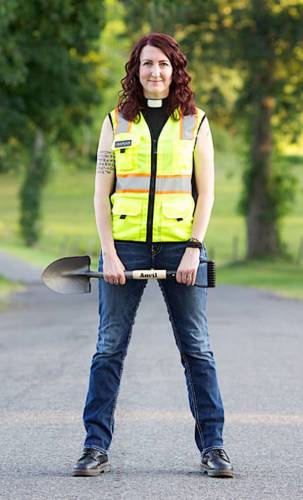 The Rev. Sarah Bowen, who grew up Presbyterian, is an interfaith minister and animal chaplain who believes in giving pet a sacred sendoff, a proper burial. Courtesy of Sarah Bowen

This past summer, the Chaplaincy Innovation Lab, founded by Wendy Cadge and located at Brandeis University in Waltham, Massachusetts, hosted a webinar on the emergence of pet chaplaincy. The webinar cited the growing need, especially among the unchurched — the “nones” — to have someone by their side with words of comfort when a pet dies.

The Rev. Sarah Bowen has experienced this firsthand, showing up at animal hospitals and in veterinarian offices to be there at the time an animal is euthanized.

“People who face the loss of a pet often don’t find the grief support they need from a church,” said Bowen. “So, it is not surprising the people are turning to chaplains, especially the ‘nones.’  ”

Growing up as a Presbyterian pastor’s kid, Bowen had always been interested in the rituals at the time of a death. She was even more interested in such rituals for the dead chipmunks she would find sometimes on her way home from school. Her mother, she admits, wasn’t too pleased whenever she opened her daughter’s lunchbox. Bowen, though, would take the chipmunk and give it a proper burial.

“People who know me know I travel with a shovel in my car, ready to bury any dead animal I come across,” she said.

Bowen’s animal chaplaincy also finds her writing blessings at the time of death, as she did for a cat she could not be there for when it was being put down. Writing a blessing to be said at the time of death, Bowen gave it to the veterinarian to read. The blessing was then attached to the box of ashes. Bowen says that these blessings and having a spiritual presence is also a comfort for the doctors and vet technicians.

“We often don’t think about the sorrow they experience in doing their job,” said Bowen, who has also officiated memorial services for animals as part of her ministry.

“Ritual is important to honor a pet,” said Bowen. But taking the time for a sacred send-off goes beyond honoring a pet. It also helps with the grieving process.

“If pet grief is not addressed, it can fester. It’s what is known as disenfranchised grief,” said Bowen.

Disenfranchised grief is the grief from losses not acknowledged in society, such as a miscarriage or the loss of a pet. Animal chaplains, according to Bowen, are helping to validate the pain and sorrow that one is feeling when losing an animal.

Greg and Heidi Bolt at First Presbyterian of Red Wing find a place for pets in their ministry not only in life, but also in death.

When Tori, a retriever in the congregation who loved to play hide and seek under the pews with the Bolts’ daughter, Sophia, passed away, she was honored by being included in the annual reading of the necrology report — lifting up the names of saints who had gone home in the past year. That year, to the surprise and gratitude of those in the congregation, Tori’s face appeared on the screen and her name was read.

“That grief you feel when a dog takes its last breath, it’s real grief,” said Greg Bolt. “And it needs to be honored.”

Donna Frischknecht Jackson is editor of Presbyterians Today. She once did a memorial service in 2008 for her cat, Sullivan. While writing this article, she lost three baby chicks. They were given a sacred send-off in a field of wildflowers behind their coop. What new ministries will this story inspire in your congregation? Share with her at editor@pcusa.org.