Idolatry is not an ancient phenomenon, but a modern reality

When the people saw that Moses delayed to come down from the mountain, the people gathered around Aaron, and said to him, “Come, make gods for us, who shall go before us; as for this Moses, the man who brought us up out of the land of Egypt, we do not know what has become of him.” Aaron said to them, “Take off the gold rings that are on the ears of your wives, your sons, and your daughters, and bring them to me.” So all the people took off the gold rings from their ears, and brought them to Aaron. He took the gold from them, formed it in a mold, and cast an image of a calf; and they said, “These are your gods, O Israel, who brought you up out of the land of Egypt!” When Aaron saw this, he built an altar before it; and Aaron made proclamation and said, “Tomorrow shall be a festival to the Lord.” They rose early the next day, and offered burnt offerings and brought sacrifices of well-being; and the people sat down to eat and drink, and rose up to revel. — Exodus 32:1–6 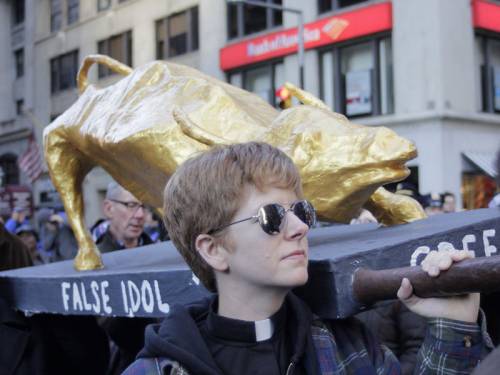 Any recounting of the journey of the children of Israel must include the story of the golden calf. It’s an important story because it reminds us of our own ways of traveling the journeys God has set before us. We want to claim our place among God’s chosen, and yet we cannot do so without owning our own failures as followers of a leader. We, too, have often found our spiritual leaders “up on the mountain” awaiting a word from God and, like Moses’ followers, have tired of waiting for some kind of epiphany that will provide us the answers we desire. We know what happens next.

When the answer does not come from the leader, we grumble, grow restless and even come to the point of looking for alternative leaders as the Israelites did.

They turned their restlessness into a frenzy in which they “ordained” Aaron to be their new leader. He called them to bring forth all of their gold and made the golden calf, to which they paid homage, oblivious to their foolishness.

Does that sound familiar? Look around the world — and don’t forget to look inward — and see all the leaders who have arisen out of crisis and become objects of worship, only to be recognized by people that the leaders they tried to worship had turned out to be golden calves. The real leader in Exodus 32 — Moses, of course — was still “up on the mountain” discerning God’s will.

Yet, in spite of our failures to patiently wait and trust God’s timing, God forgives our waywardness. Exodus 34 tells us that we are forgiven and blessed by a merciful and gracious God. But when we tire of the discipline of our faith and seek to ordain false leaders, whose rhetoric is compelling and resonates with our biases and fondest wishes, we must remember idolatry is not just an ancient phenomenon. It will, in our own day, lead to ruin for the weakest and most vulnerable of God’s children and, in the end, “visit the iniquity of the parents upon the children and the children’s children to the third and fourth generation” (Exodus 34:6–7).