Changing your worldview by what you are reading 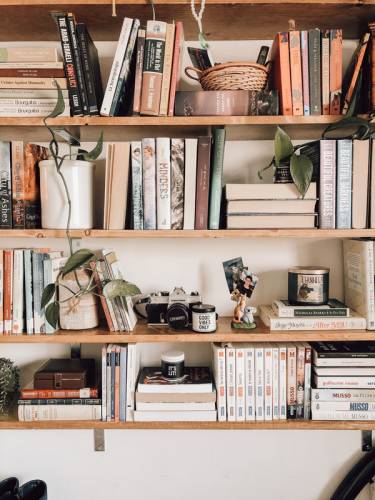 The books on our shelves say a lot about who we are and the people who have influenced our thinking and perspective on the world. Ines Sayadi/Unsplash

I couldn’t wait for the livestream of “Take Me to the World” to begin. The show was touted as a once-in-a-lifetime Broadway event, featuring a star-studded lineup of performers coming together to celebrate the 90th birthday of Stephen Sondheim, the prolific lyricist and composer of such musicals as “Into the Woods” and “West Side Story.”

This being Broadway in a time of pandemic, however, meant that performers had to sing and stream from their homes, unwittingly providing viewers like me with an intimate look at life offstage. I soon found myself a newbie voyeur, straining my eyes for a better look at a vase on a desk or a family picture on the wall. But perhaps the most intriguing distraction was that of the unassuming bookcase. Was that really a book of ancient erotic Irish art? Was there even such a thing? I wasn’t alone in finding this all very entertaining. It didn’t take long for the media to pick up on this “bookcase as a backdrop” trend. The New York Times even ran a story on how the hottest quarantine accessory was now the “credibility bookcase” — a case filled with titles meant to impress. While it may be true that you can’t judge a book by its cover, these days it seems you can judge a person by their bookcase.

I never gave my book collection much thought until a retired pastor dropped by my office one day. Being new to the congregation, he wanted to get to know me. He wasn’t in any rush, however, to take the seat that I offered. Rather, he made a beeline to the bookcase and began scrutinizing the titles on each spine. There were a few scowls and a few smiles, but luckily no looks of utter dismay. When he was done, he thanked me for the visit. We hadn’t even talked. As he left, he said, “I now know all I need to know about you.”

What would your books reveal if they were scrutinized with the searching eyes of a voyeur or the sleuthing stare of a retired minister? Right now, if the video cameras were on my bookcase, you would see numerous books on 18th-century living skills, from open hearth cooking to quilting to growing a medicinal herb garden. You would see some theological classics that haven’t been touched in years. (Sorry, Karl Barth.) You would also see my whiteness. Yes, my whiteness. And you would agree with the conclusion that I have recently come to — that the one book on my shelf by Black theologian Howard Thurman is simply not acceptable. Especially today.

Books have the power to inform and inspire. They comfort and challenge. And they are a critical component in opening our eyes to those who have and are walking through the fires of hate and injustices. How do we expect to preach prophetically if we don’t open ourselves to hearing different viewpoints? As I look to create a more diverse reading list, I realize there is so much I do not know. There are stories from history that have not been heard, because history is sadly told from the perspective of those who hold the power.

My bookcase is far from credible. So, I am giving it a makeover. There are now the works of James Cone and Cornel West joining Howard Thurman in the theological section of the bookcase. I am also eagerly waiting for my womanist theology book to be delivered. On my 18th-century American shelf, books on Black Americans such as Crispus Attucks, the first to fall in the Boston Massacre; Salem Poor, known for his heroism at the Battle of Bunker Hill; and Lemuel Haynes, a Revolutionary War-era pastor remembered as the first Black man ordained as a preacher in the United States, are coming.

There’s also a poet I need to reacquaint myself with. I was introduced to her by a clergy mentor of mine, Kim, while working on a paper on early American women poets. My focus was on Anne Bradstreet, who came to Massachusetts in 1630. It was then that Kim offered the name of Phillis Wheatley, who was the first African American to publish a book of poetry in the colonies in 1773. It was a name I had never heard of, making Kim smile sadly. Wheatley’s poems have since enriched my life. I also learned something special about my mentor that day as Kim, confusing me for just a second, told me she was named after the poet. Turns out the “P.” in front of her name was for “Phillis.”

What we read says a lot about who we are. Books have the power to change us, and change is needed if we are to change the world. How credible is your bookcase?