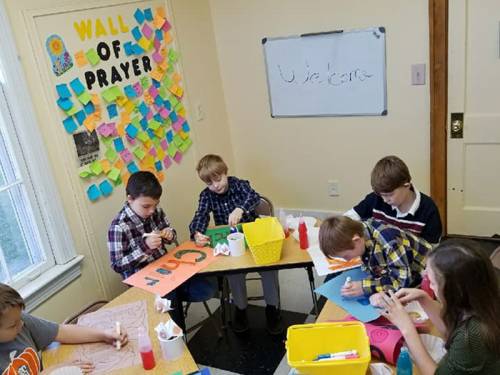 First Presbyterian Church in Dickson, Tennessee, was in a rut. The pastor of more than 30 years had retired a year before, and the six-member session was keeping the church together. But they were barely surviving. It was all they could do to keep up with their regular tasks, let alone start any new creative ventures.

Throughout this time of transition, there was growing confusion among the congregation about who did what. Who did a member contact to reserve the fellowship hall? Who did a person call to put an event into the newsletter?

Something needed to be done.

The session decided to host a churchwide retreat, beginning on a Friday night and ending Saturday afternoon. Young and old met in the fellowship hall and began discussing First Presbyterian’s history and current trends in congregations. On Saturday morning, they began exploring the responsibilities of the church.

With Post-Its on hand, members identified the various responsibilities found in the Book of Order — from the Great Ends of the Church to the jobs of pastors and elders. They then listed their own congregation’s jobs that involved tasks that were identified as the traditional domain of the women’s group, the men’s group and the deacons. After designating those and sorting through the rest of the Post-Its, they found other categories that needed attention such as administration (finance and personnel), worship, education, property and membership. Recognizing the need for better communication within the congregation as well as with the greater community, a communications category was added, too.

Over the next two months, session members took the Post-Its and organized committees and created committee descriptions based on the needs of the church. They shared those descriptions with the congregation and invited members to join the committees through bulletin inserts and Sunday morning chancel announcements. They made calls and wrote emails to those they wanted to personally invite to serve on committees. Eventually, each committee had its first called meeting and discussed goals, responsibilities and opportunities.

It didn’t take long for the efforts of the session members to bear fruit. The newly structured committees and members added energy and imagination to the everyday tasks of the church. It was now time to start new ventures.

“Previously, there was less order. Now, we’re better organized and we have a better system for delegation of duties and volunteering,” he said.

Education wasn’t the only area getting a boost. Other committees were experiencing renewal.

The membership committee, tasked with updating the membership rolls, went a step further. They distributed a form that collected contact information and asked where members had interest in volunteering, creating yet another opportunity to involve congregation members.

The communications committee created a website to reach out to the rapidly growing city of Dickson. They even revamped the church’s Facebook page, allowing the children’s Sunday school class to post pictures.

The worship committee, invited to think creatively about the service, considered ways to make children and their families feel welcome and connected, creating a note to put in the pew racks that emphasized the church’s understanding of wiggles and giggles during worship. They created a welcome bag for first-time visitors. And the property committee opened some long-closed spaces for the children’s Sunday school classes and hosted a work day before Holy Week, tidying up the property inside and out.

As the work of the newly invigorated committees continued, something began to happen.

More members felt connected to the mission and ministry of the church and invested more time in the work of the church. Attendees started attending more regularly because they had been invited to be part of the work.

“Members are becoming better acquainted with other members by working side by side on projects and programs,” said Ronny Greer, an elder on session.

Another plus is that session meetings are now shorter.

“Committees report their efforts, seeking approval when needed. The session can focus on other tasks, like calling a new pastor, instead of agreeing who will call the plumber or who will pick up the graduation gifts for the youth,” Greer said.

In taking the time to identify the needs of the church and to create and re-create committees, the session of First Presbyterian has shared the load of running a church with the body of Christ.

This sharing of tasks has not only created energy that was lacking, it has helped the session to no longer look out at the congregation and see a dearth of leadership.

Now, they say, they see many leaders — and potential leaders — sitting in the pews.

Jeannie Hunter is a pastor in the PC(USA) with training in interim ministry. She served as interim minister at First Presbyterian of Dickson, Tennessee, during its committee transformation.