Make A Donation Click Here >
Home › Jesus among the Navajos 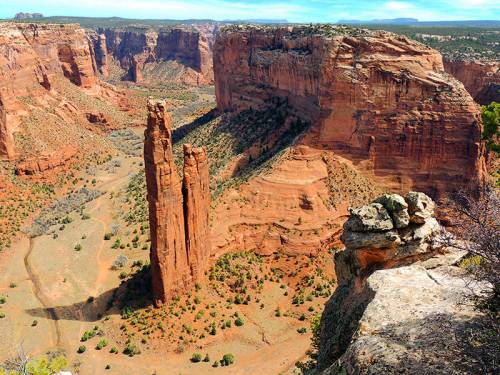 It is Easter morning and members of Del Muerto Presbyterian Church assemble around a roaring fire. They gather close to the edge of Canyon de Chelly in northeastern Arizona — an ancient home of the Anasazi Indians and a historic hideout for Navajos resisting Spanish and American invaders. The morning gathering is the culmination of “SingSpiration,” the congregation’s three-day tent revival, which has been so successful that they ran out of mutton stew at Saturday’s lunch.

Now near dawn at the canyon rim, one of the worshippers plays “Amazing Grace” on the flute. The instrument’s breathy notes mingle with the desert breeze. Danny Halwood, a commissioned ruling elder of the church, reads the resurrection narrative from the Gospel of Matthew. His voice emphasizes the words of the angel, “He is not here, for he has been raised.”

Francis Draper, a patriarch of the church, then gives a homily. His face in the firelight is deeply weathered, his eyes shining with fierce brightness. Holding back tears, he says that though he is uneducated, God gives him words to preach, much like the prophet Jeremiah. He shares a simple message centered on John 3:16. “Those who believe,” he summarizes, “will receive eternal reward, but unbelievers are thrown into a place of never-ending flames.”

I have taken this four-day pilgrimage not only to worship with my Navajo brothers and sisters, but also to experience how the good news of Jesus Christ is influencing their sovereign nation. As I journey, a central question guides me. It’s one that Jesus asked his disciples: “Who do you say that I am?” Who is this Christ that Presbyterians proclaim among a people whose roots go back thousands of years?

The answer to my question is critical, considering historic Christian aggression toward Native American cultures. On my way to the Navajo Nation, I recalled this tragic legacy through a visit to the Bosque Redondo Memorial site in New Mexico.

Beginning in 1864, the U.S. government — with a goal of ethnic cleansing — rounded up the Navajo people and forced them to march more than 400 miles from northeastern Arizona to a new home in eastern New Mexico. Commonly called “the Long Walk,” Navajos have another name for the march, hwéeldi, which means “suffering.”

After four years of near starvation and lack of shelter, resulting in thousands of deaths, the exile ended with a treaty that returned 3.5 million acres of land inside the Navajos’ four sacred mountains — Mount Blanca to the east, Mount Taylor to the south, the San Francisco Peaks to the west and Mount Hesperus to the north.

Surely, these painful lessons have taught us the need for humility and respect. Surely, doing ministry amid the Navajos is a partnership that embraces their history and ancient culture. Then again, perhaps not.

This same young woman has encountered much of what she considers “ugly” among Christians in the Navajo Nation.

“I have attended their memorial services where the message is loud and clear: Unless I follow this Jesus, I have no salvation on this earth and I’m not going to heaven. I cannot accept this kind of thinking,” she said.

Presbyterians began their work among the Navajos in the mid-1800s. The goal was to evangelize, convert and instruct in the Christian faith, perfectly in sync with U.S. policy. Admirably, Presbyterians also engaged in ministries of healing like the medical clinic founded as part of our mission at Ganado, Arizona, now called Sage Memorial Hospital. Today, there are eight chartered PC(USA) churches and two chapels among the Navajo, existing under the umbrella of Grand Canyon Presbytery.

Documents from those earliest years use lamentable language. One speaks of the “persistent primitivism of the Navajos.” Another speaks of training young girls to “make their own clothes after the latest American style.”

In 2016, though, the 222nd General Assembly called on the Church to confess its complicity and repudiate the Doctrine of Discovery, a legal principle that for centuries paved the way for the subjugation of indigenous peoples. Incorporated into U.S. law in the 1800s, the Doctrine of Discovery was expressed as “manifest destiny” in the oppression of Native Americans. A report issued in conjunction with the 2016 General Assembly action says that for 200 years of American history, “the Presbyterian church was active in the formation and implementation of government policies affecting Native American peoples.”

But the question remains: Is the Jesus we preach among the Navajos a blessing or a vestige of missionary myopia?

Del Muerto Presbyterian Church (Tseyi Bidáá, as it is known in the Navajo language) was founded in 1954 by Presbyterian missionary Joseph Gray and his Navajo assistant, Jimmie Draper. The church recently discovered its founding documents in a metal box beneath the floorboards while installing a wood-burning stove. Among the papers was a list of charter members, including Danny Halwood’s parents. 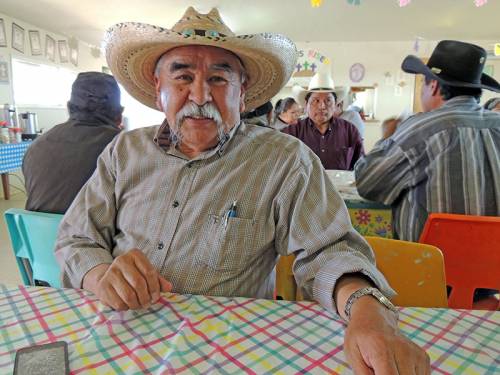 Halwood is an energetic, winsome man, wholly dedicated to his small congregation. His personal testimony includes how the fervent, intercessory prayer of his Christian parents helped heal his sick brother. It also includes how his own recommitment to Christ helped him overcome alcoholism, a scourge on the Navajo Nation.

“I told my family I was going back to church,” he said with a smile, “then I said goodbye to my drinking buddies.”

Halwood served as translator for four Presbyterian pastors, all of them Anglo. The final one, the Rev. Robert Burdett, encouraged him to assume leadership of the flock. Halwood pursued his education by attending classes in Phoenix. He was commissioned by Grand Canyon Presbytery in 1999. He and his wife receive no pay for their tireless service. Rather, they survive on pensions from the Navajo government.

Halwood is known to speak of traditional Navajo practices as “the work of the devil,” and he is unequivocal when asked about the church’s relationship to this aspect of its culture.

“We are separate from those traditions,” he said. “We believe that Jesus is the only way to salvation. After all, this is scriptural, with Jesus himself saying in the Gospel of John, ‘I am the way, the truth, and the life. No one comes to the Father except through me.’ ”

The Rev. Norma McCabe has a more moderate stance. McCabe is stated supply pastor at First Presbyterian in Kayenta, Arizona, and the only Navajo woman ordained as a Presbyterian minister of Word and sacrament. She also serves as a consultant for Northern Native American Ministries of the Presbytery of Grand Canyon, overseer of Navajo congregations.

Though McCabe’s father, a medicine man, raised her and 13 siblings in traditional ways, she also endured the “re-education” of the Bureau of Indian Affairs’ Tolani Lake Indian School. They forced her to cut her hair and to cease speaking Navajo, with discipline enforced by spankings. Once a week, a Presbyterian missionary named Charles Smith provided obligatory lessons in Christianity.

Later, after her mother’s death, McCabe’s sister became a Christian through the influence of the Cook School for American Indians in Tempe, Arizona, a Presbyterian-affiliated institution. She convinced McCabe to convert to the faith.

From the beginning, McCabe was devoted to her church, but her call to ordained ministry came while she was working as chief clerk for a Navajo judge.

“I saw so much hardship among the people who came to court,” she said. “I felt that somebody needed to pray for them, minister to them, show them compassion.”

Recently, despite the warnings of others that it was not befitting her faith, she attended a healing ceremony for an extended family member who holds to traditional ways.

“We need to go beyond ourselves into whatever culture we find ourselves as Christians,” she explained. “There is good and bad everywhere, and we must reach out to people who are hurting. This is what Christ meant when he called us to recognize him in the hungry, the naked and the sick.”

Keeping to the Gospel 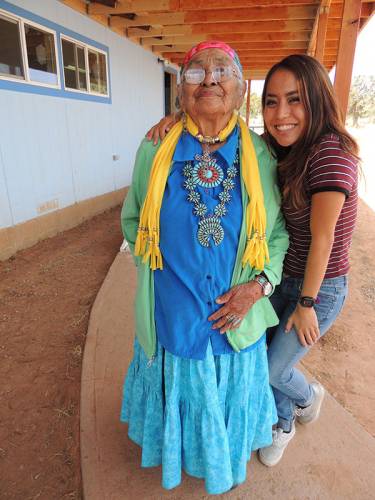 There is no scarcity of need in the Navajo Nation. Unemployment is seven times higher than the U.S. average, and per capita income is far below the U.S. poverty level. Many family members leave the reservation simply for economic survival.

Adequate housing is scarce, and homes often lack sufficient plumbing and electricity. Though progress has been made in health care, Navajo rates of diabetes, tuberculosis, alcoholism and heart disease exceed national averages. Water is critically precious; moreover, uranium mining threatens a people who endured the tragic breach of the Church Rock uranium mill’s disposal pond in 1979, an event that released more radiation than the Three Mile Island disaster.

McCabe says the Navajo congregations do what they can to help, but they have limited resources. Many of them offer hospitality through meals, showers, used clothing and newborn baby packages when people find themselves stranded or in dire need.

Even with her tolerant viewpoint, McCabe believes it is vital that the Christian message stay away from traditional Navajo beliefs. Otherwise, she says, there is danger of blending and losing the true gospel. She points to the Native American Church, which mixes a belief in the Great Spirit, peyote usage (a hallucinogenic common in Native American ceremonies) and the affirmation of “Brother Jesus.” It is the largest indigenous religious movement in America.

As Francis Draper finishes his Easter homily, Halwood asks those gathered to kneel in the red dirt and pray. Alternating between Navajo and English, he pleads for God’s blessings upon the leaders of our world, the United States and the Navajo people. The newly risen sun greets the communal “Amen.”

Afterward, a young member of the congregation who no longer lives on the reservation lingers, taking in the view of Fortress Rock — an island in the canyon where a brave and ingenious band of Navajos resisted the Long Walk for weeks, baffling the U.S. cavalry. It is still a source of pride among the Navajos.

“There are many stories to be told here,” the young man said.

I, too, linger for a few moments, soaking in the view, the wind on my face. I think of the oft-quoted verse from Hebrews: “Jesus Christ is the same yesterday and today and forever.” I say a final prayer that we will incarnate Jesus’ purposes through the abundance of his love and the extravagance of his grace. I turn to leave with a final word on my lips. A Navajo word. Hózhó. Harmony.

Krin Van Tatenhove, an ordained PC(USA) minister for more than 30 years, is now enjoying his time writing and traveling. He is co-author of a book on congregational renewal due out from Westminster John Knox Press in the spring of 2019. He lives and works in San Antonio.