‘We’re in This Together’ begins healing and brings hope 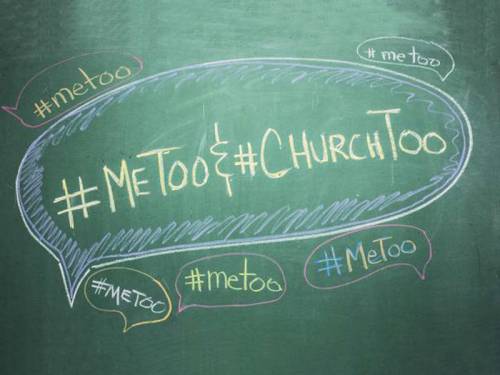 The #MeToo movement has broadened to a #ChurchToo conversation as the Synod of Lincoln Trails not only seeks to educate, but to also create a safe space, for both men and women to share stories.

When the #MeToo hashtag exploded on the social media scene in October 2017, no one could have predicted its continued impact on the treatment of women both in and out of the workplace. For a while, #MeToo seemed to be more about bringing down famous people in big corporations or enterprises, like Harvey Weinstein and Matt Lauer. Hollywood is one thing, but harassment isn’t supposed to happen in churches, right?

Unfortunately, churches are not immune to inappropriate speech and behavior toward women, as the popularity of another trending hashtag, #ChurchToo, has indicated. Church leaders who have experienced harassment are now searching for ways to address and prevent it.

The Synod of Lincoln Trails in Indianapolis has taken steps to help women in church speak out about sexual misconduct by hosting two conferences on the subject. The first conference, entitled “Empowerment and Restoration,” took place in early spring at St. Luke Union Presbyterian Church in Bloomington, Indiana. It gathered a group of about 25 clergywomen, church employees and certified ruling elders (CREs).

“It was important to include women who work in all areas of the church, whether as clergy or as staff,” said the Rev. Sara Dingman, synod executive of Lincoln Trails and one of the event planners. “As employees, they often ‘fall through the cracks’ if something happens because they may not belong to the presbytery like CREs and clergy do.”

The synod invited two counselors to lead the two-day spring event: Drs. Caroline Burke and Krista Redlinger-Grosse. Both women work for LeaderWise, a Minneapolis-based company that supports nonprofits and clergy professionals on such topics as team building, appropriate leadership, and personal and spiritual development. The workshop, Dingman says, provided the space for intimate discussion, as the limited number of participants provided a safe environment for sharing. The facilitators helped participants openly name their experiences, develop strategies for facing them and take steps for the future. One conference participant said she would go back to her presbytery and share what she had learned, while another said she planned to include #MeToo in a sermon to spotlight the problem.

Due to the success of the first conference, the Synod of Lincoln Trails decided to host another event. This time, though, an important ingredient was added — the voices of men.

Entitled “We’re in This Together,” the conference lasted for five hours and was held at Indiana Interchurch Center in Indianapolis.

Burke and Redlinger-Grosse were once again on hand to facilitate the discussion, and they were joined by LeaderWise’s Executive Director Dr. Mark Sundby.

In the final activity of the event, each small group crafted a statement that included what women need men to know; what men need women to know; and what steps they were willing to take to better become each other’s allies in the process, rather than adversaries. These statements were then presented to the full group.

“At the beginning of the day, the participants seemed hesitant, uncomfortable and perhaps even a bit doubtful,” Dingman said of the mixed gender gathering.

By the end of the day, though, there was “much more forgiveness in the room, much more understanding,” she said.

The Synod of Lincoln Trails hopes to continue the strides made by adding a third conference in the near future, this time just for men. This would allow men to delve more deeply into #MeToo and what was communicated to them at the “We’re in This Together” conference.

Dingman feels that for the #MeToo movement to be sustained, women and men must continue to talk and share together in safe, objective environments, like those provided at these conferences.

“The event was highly successful, because it was an opportunity for both men and women to vulnerably speak their truth,” she said.

The Rev. Barbara Kenley found the workshop especially meaningful and wrote about it on the Synod of Lincoln Trails’ website.

“This is where the church can help,” she wrote. “When the church dares to stand up with the #MeToo movement, we just might find ourselves relevant to the world around us. What a refreshing discovery that will be.”

Rebecca Lister is an associate professor of music at Lebanon Valley College in Annville, Pennsylvania. Her passion is music and worship in churches. She has had several writings published in the academic field of music. She is currently an inquirer in Carlisle Presbytery.