Creative ways to care for others 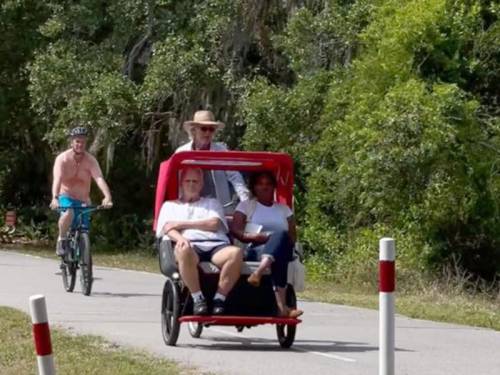 Bill Hemme takes passengers from an assisted living facility out for a rickshaw ride. The rides, which are free to the community, are part of First Presbyterian’s new ministry, “Joy Rides of Dunedin.” Courtesy of Bill Hemme

Bill Hemme sits in the driver’s seat of the rickshaw, pedaling at a leisurely pace. The sky is clear and there’s a refreshing breeze blowing through Dunedin, Florida. His passenger, Don, waves joyfully to those who pass by. It’s been a while since Don has been able to wave to others, but with COVID-19 safety restrictions lifting, he finds himself rejoining the world by riding in a rickshaw. The ride not only brings joy to Don, but provides his wife, Pat, with a time of much-needed respite. Don has Alzheimer’s.

“He found the first ride a bit bumpy,” said Hemme, making sure on Don’s second ride to veer away from cobblestone paths. Don, though, came prepared with a pillow to cushion any jolts, just in case. The rickshaw rides are part of a new ministry at First Presbyterian Church called “Joy Rides Dunedin.” The soft launch of the ministry was at the height of the pandemic as Hemme took only his in-laws out in the rickshaw. It wasn’t until the end of March, on Good Friday, that Joy Rides became available to the greater community. Several 45-minute rides were scheduled throughout the day with residents at nearby care facilities.

“There is no cost to the riders or the care facilities,” said Hemme. “The rides are a gift freely given from First Presbyterian to the community” — a gift being eagerly embraced. Ride requests have been steadily rising since March.

“COVID-19 opened us to an opportunity to reach out. There have been an awful lot of people who have been shut-in. People are hungering for community,” said Hemme.

For Hemme, the rides have been a long-desired dream of his since hearing about an initiative that started in Denmark called “Cycling Without Age,” which would take seniors living in assisted care facilities out in rickshaws. The idea has become an international movement with chapters located worldwide. A few years ago, Hemme sought a local chapter to learn more, but “sought” was as far as it went.

It wasn’t until Hemme connected with a Methodist minister in Illinois who had started a “Healing Rides” ministry that his desire to pedal to bring joy to others shifted into high gear. Armed with the pertinent information for starting such a ministry — cost of a rickshaw, insurance issues, maintenance, etc. — Hemme called his pastor, the Rev. David Shelor, and shared his vision with him. “His answer was a resounding ‘YES!’” said Hemme.

In 2018, the mission committee and session of First Presbyterian signed off on the Joy Rides of Dunedin proposal. Fundraising to buy a rickshaw, which costs about $12,000, began in 2019. With First Presbyterian Church located near TD Ballpark, downtown Dunedin can see a lot of traffic when major league spring training games begin.

That’s when the idea to park cars on the church property came forward, and with it came close to $2,000 in just a few hours. Everything was going as planned until COVID-19 shut down major league baseball along with the rest of the country. Private donations, though, continued coming in and First Presbyterian was able to buy a rickshaw in the summer of 2020.

Then it was just a matter of being patient, waiting for the time that Joy Rides would be able to take residents of nursing homes, assisted living facilities, rehabilitation centers and memory care units on rickshaw tours around the Dunedin community and the Pinellas Trail, which connects passengers with the best of Mother Nature.

While the delay was frustrating, it was worth the wait to see passengers’ faces light up as they socialized once again. “The rides are very slow, which allows us to chat with people,” said Hemme, noting that when looking for volunteers — two are needed: one to drive the rickshaw and a cyclist to accompany the rickshaw — he doesn’t recommend recruiting avid cyclists who would not be able to maintain a slow pace. “Someone who loves to cycle and who has experience with the elderly would make perfect drivers for the rickshaw,” he said.

Hemme had always wanted to engage the community outside of the church. Joy Rides is now making that happen in more ways than he could imagine. Recently, Hemme took a man scheduled for knee surgery on a ride. When they passed a member of First Presbyterian working on the church garden, a conversation ensued ending with a promise from the man to return when his knee was better to help weed the garden.

“People have been in isolation for too long because of this pandemic. They are eager to reconnect,” said Hemme. “We are reaching out and the community is reaching back.”

Perhaps one of the greatest challenges for Shelor during the pandemic was losing the ability to “have scores of pastoral care contact” on a Sunday morning. “When I greeted people after worship and chatted with them, I would hear about how their grandchildren were doing.” But with the livestreaming of services, that ability to connect with many on a Sunday morning was gone. This past year has led Shelor to rethink pastoral care, making it more intentional and something the entire congregation is involved in. One way First Presbyterian is seeking to do this is by putting together teams for what Shelor calls “intentional, relational conversations.”

“We want to hear from everyone — talking one-on-one, hearing what their passions are now and the perspectives they have,” he said, adding that livestreaming the services has been good, but physical contact is better.

If ever there was a lesson to learn from the pandemic it would be that in a year of pandemic isolation, digital ministry cannot replace the importance of being together.

“Zoom has been efficient, as the idle chatter that often takes place in person gets eliminated. But in that idle chatter lies the God moments,” said Shelor. “Going forward, I will be more mindful of that and ask, ‘What is the gift of physical presence?’ as we emerge from this pandemic.” 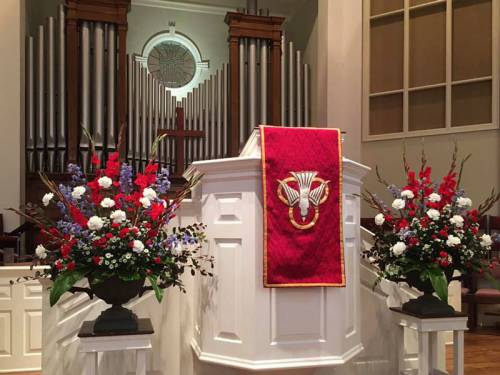 “Over these months, we’ve recognized that personal connection is vital, as it has been human connection and relationships that people are missing most,” said the Rev. Susan Carter Wiggins of Germantown Presbyterian Church in Germantown, Tennessee.

Since the very start of the pandemic shutdowns in early March 2020, Wiggins has been praying about and dreaming up ministries that are intentional in keeping people connected to one another, the church and God. In fact, it was an actual dream that the associate pastor for congregational care and nurture had that gave birth to “Circles of Care Ministry.”

“I was awakened around 3 a.m. and clearly heard, ‘Susie, I have something I need you to do; but don’t worry, I’ve given it a name, and I will show you how to make it happen,” she said. Within a week, Circles of Care Ministry was launched with about 40 “servants” from Germantown Presbyterian assigned to care for its 150-plus parishioners. “Believe me when I say, ‘With God, anything is possible.’” 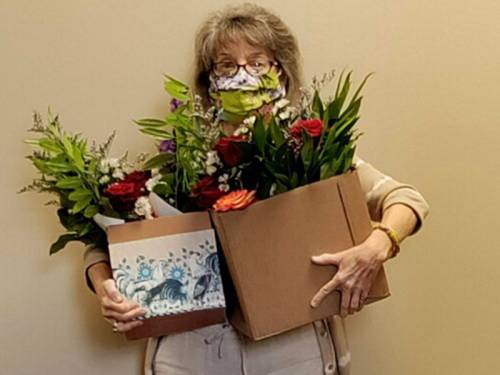 The Rev. Susan Carter Wiggins said Germantown Presbyterian’s flower ministry has been a way of keeping connected with the community. Courtesy of Susie Wiggins

Circles of Care Ministry was created, Wiggins says, to help the most senior parishioners not to feel so alone and isolated during the safer-at-home time. “There was no way for any of us to know how long this time of not being together would last, but goodness knows, the ministry has been a lifeline for so many,” she said, noting how the Circles of Care servants write notes, prepare and deliver meals and pick up groceries. Surprisingly, the most important ministry to emerge during the pandemic was that of making phone calls.

“There is more to ministry than figuring out how to do video and livestreaming. We found the greatest need — above all other things — was a phone call,” she said.

Circles of Care Ministries, which is overseen by Germantown’s congregational committee, will continue beyond the pandemic. “We’ve seen its great need and the vitality it brings to the church,” said Wiggins.

“Circles of Care” is just one of many intentional caring ministries that have come out of the pandemic. Another one has been Germantown’s “Petals and Prayers Flower Ministry.” Blessed with a “wonderful flower ministry” and having a florist in the congregation as well as a flower room with coolers to keep the flowers fresh, Wiggins wanted to keep having weekly chancel arrangements made even though the congregation was not meeting in the sanctuary. Viewers of the worship videos filmed in the sanctuary could still see the floral arrangements, and, she said, it would add a “sense of normalcy” in a time of upheaval. The church would also be keeping its financial commitment to its floral wholesaler.

In pre-pandemic days, the chancel flowers would be broken into smaller arrangements and then delivered to shut-ins, but during the pandemic such visits were not allowed. After taping the Pentecost 2020 worship service with her colleagues, Wiggins gazed over at the red gladiolas and red roses that were on the chancel. “I thought I had to do something with these flowers,” she said. Wiggins called two assisted living centers and asked if they had flower delivery protocols in place. They did. She told the flower ministry team the good news.

Since Pentecost 2020, Wiggins has delivered more than 270 arrangements. Initially, the flowers were given to residents in nursing homes and assisted living centers, but Wiggins later expanded her deliveries to parishioners of all ages, including families with young children. The deliveries also gave Wiggins the opportunity for porch and doorway visits.

“The goal is to remind our parishioners through this simple act of receiving flowers that they are deeply loved,” she said. Wiggins herself has felt that deep love when she realized something on one of her deliveries. Her grandmother, Ethel, was a florist in Morrilton, Arkansas, who opened her shop during the Great Depression. She delivered flowers for many years, retiring in 1968. “She delivered flowers herself all over Morrilton; so my flower deliveries are merely an extension of my grandmother’s ministry. I’m channeling my ‘inner Ethel,’” she said.

Be it flowers or a phone call in Germantown, Tennessee or rickshaw rides in Dunedin, Florida, congregations are coming back together with a new sense of what “together” means and what being there for one another can look like in a post-pandemic world. And as Hemme hops onto the driver’s seat of the rickshaw, he pauses and remembers the joy First Presbyterian’s Joy Rides ministry gave Don, the passenger with Alzheimer’s who smiled and waved to passersby. “He showed that Joy Rides can be a part of a well-lived life, right to the very end.” Don passed away in May.

Tips for creating a Circles of Care ministry

The Rev. Susan Carter Wiggins offers these tips for beginning a “Circles of Care Ministry” in your congregation: