…be led forth in peace. (Isaiah 55:12). Support to the Peace & Global Witness Offering.
Make A Donation Click Here >
Home › 223rd General Assembly: The Spirit at work in St. Louis 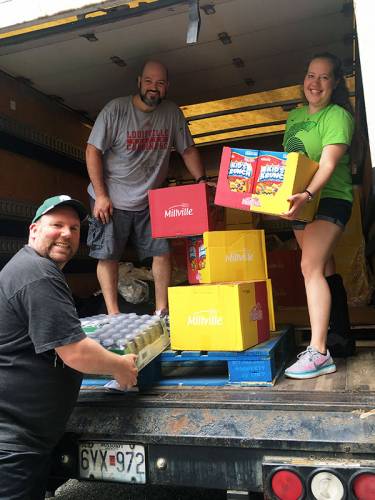 Volunteers come to St. Louis to be the “hands and feet” of Christ. Courtesy of Andrew W. Yeager-Buckley

If the apostle Paul had to cite an example of his words spoken to the Romans — “We do not know what we ought to pray for, but the Spirit intercedes for us through wordless groans” — all he would have to do was point to St. Louis on a map.

It is there, in one of the nation’s most racially segregated cities, where loud cries and wordless groans against racial injustice are being heard through the Hands & Feet initiative. The initiative invites Presbyterians to come to the host city of General Assembly to not just cast their votes in an air-conditioned convention room, but to also become part of the community, working with their hands, their feet and their hearts, for justice and peace.

Behind Hands & Feet is the Rev. Dr. J. Herbert Nelson, II, Stated Clerk of the General Assembly of the Presbyterian Church (U.S.A.). The son of a South Carolina pastor who was on the front lines of the fight for racial equality and justice in the 1960s, Nelson grew up with social justice being integral to the call to ministry.

“It’s part of my spiritual DNA,” he said.

So when Nelson attended the 222nd General Assembly (2016), he was keenly attuned to — and baffled by — what was happening on the streets of the host city, Portland, Oregon. Nelson had never seen so many homeless white people.

“That was something different for me,” he said. Nelson says he felt he was being given a new set of eyes to better understand the depth of homelessness.

Nelson knew then he wanted General Assembly to be an opportunity for those attending to be part of the work in helping a community change for the better.

“I didn’t want us being like Congress, coming to a city and spending money and leaving it just as it was when we came,” Nelson said. “Hands & Feet is about leaving a city better than it was.”

Hands & Feet, though, is not about “riding in on a white horse,” says the Rev. Dr. Craig M. Howard, transitional leader of the Presbytery of Giddings-Lovejoy in St. Louis.

“Our best work is done in collaboration, and we are working on mission projects with folks already engaged in this work,” Howard said. “We want people to come and be part of mission work at General Assembly and then go home and take what they learn to their communities.”

St. Louis, the site of the 223rd General Assembly, is the debut city for Hands & Feet, and those behind the initiative couldn’t have asked for a better testing ground to show what God’s children can do when they put differences aside and come together in a shared mission. 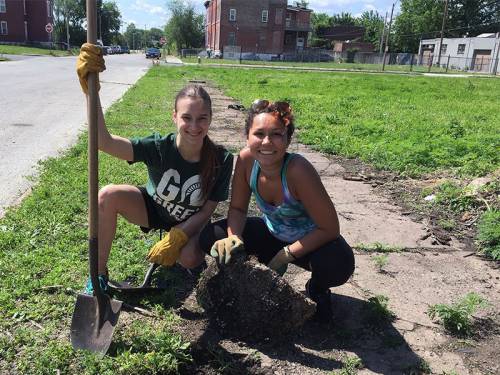 The context of each Hands & Feet city, though, will dictate what mission work is done, Nelson says, adding, “There is no cookie-cutter approach to this initiative.”

“Nelson kept saying we were the guinea pigs,” Howard laughed, underscoring the fact that Hands & Feet would in fact be organic and Spirit-led, surprising those involved with opportunities not only for service, but also for healing rifts and divisions.

In 2012, General Assembly chose St. Louis as the site for its 2018 gathering. At the time, the Presbytery of Giddings-Lovejoy was not exactly celebrating its General Assembly designation. It had other business to deal with.

Morale was low among members: One of its largest churches had just left the denomination, leadership was in disarray, and finances were dismal partly because a church had defaulted on a million-dollar loan.

“We were on shaky ground,” said the Rev. Cedric A. Portis, pastor of Third Presbyterian Church in St. Louis, and a member of Giddings-Lovejoy.

The presbytery’s wobbly condition was underscored by division among its members, Portis said, and that was exacerbated by the August 2014 riots in nearby Ferguson after Michael Brown, an unarmed black teenager, was shot and killed by a white police officer.

“Ferguson exposed a lot of racism that was being ignored, both within the community and the presbytery,” Portis said. “And now we had to prepare for a General Assembly.”

The shared mission of working on General Assembly, however, began turning the presbytery around, Portis says, “with healing of divisions coming in the most unexpected way.”

For example, when a presbytery colleague, Carol DeVaughn, approached Portis to be co-moderator with her of the Committee on Local Arrangements, that sent a positive message to the rest of the body.

“We didn’t get along in the past, but now we were showing a message of reconciliation. We were showing the body, if these two people can come together, well then … ,” Portis said.

Through the work of planning General Assembly coupled with more intentional and honest conversations on racism, Portis has seen “a coming together” in the presbytery.

The Presbytery of Giddings-Lovejoy has also sold some properties, Portis says, resulting in the presbytery ending 2017 in the black and debt-free.

“To watch a presbytery turn around gives hope to the whole church,” Nelson said. “They are witnessing to the reform that can happen. It is inspiring to hear these stories.”

For the past year, Presbyterians of all ages have been coming to St. Louis as part of the Hands & Feet initiative to learn about the justice issues facing the city. One congregation that workers have teamed up with is Oak Hill Presbyterian Church. A key player in the Hands & Feet initiative, Oak Hill has been hosting groups at their Amen House for a week of mission and ministry in their neighborhood. 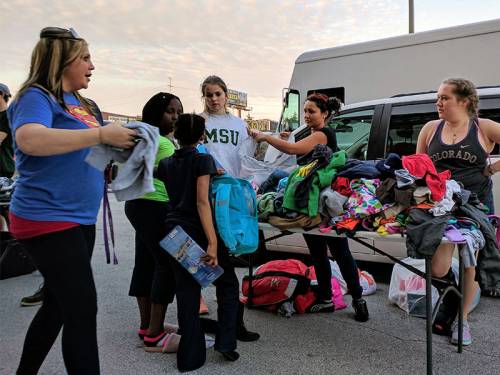 When the Rev. Erin Counihan arrived at Oak Hill in July 2014, Amen House had been open for about a year, working with local nonprofits addressing justice issues in the city.The day before her third Sunday in the pulpit was the day Michael Brown was shot and killed.

Immediately, Counihan began speaking about police violence, white supremacy, white privilege and racism, which can be hard things to talk about in church. Fortunately, Counihan and Oak Hill found help through a nonprofit partner, Metropolitan Congregations United, which offers a curriculum called “Sacred Conversations about Race.” Through facilitated, guided conversations led by trained facilitators, Oak Hill engaged in these hard conversations — and continues to have them, implementing what they’re learning into their Amen House ministry.

One of the first groups to stay at the Amen House to participate in the Urban Plunge — an opportunity to enter into the heart of urban ministries — were students from Ladue Chapel Presbyterian Church in St. Louis.

The plunge went so well that they kept coming back.

Last summer they worked in a community garden near Ferguson. On their way back, the Rev. Melanie Smith, Ladue Chapel’s associate pastor for youth and young adults, chose to drive down Kingshighway Boulevard, which crosses over the Delmar Divide in St. Louis. That’s the part of Delmar Boulevard where the setting changes from blighted houses, run-down factories and abandoned buildings to beautiful stone churches — a picture of the legacy of racial segregation in St. Louis.

When they got back to the Amen House, Smith asked her group, “What did you see?”

“It switched. It switched, like really super-fast,” a member of the group replied. Then Smith asked them, “Why? Why do you think?”

The students began discussing what they’d seen and the legacy of racial separation in their city. They talked about the practice of “redlining” through creation of the Federal Housing Administration, which refused to insure mortgages in and near black neighborhoods from the FHA’s inception in 1934 to 1968, when the Fair Housing Act was passed. Mortgage lenders adopted many of these same practices. Racially restrictive housing covenants were also used to keep people of color out of white neighborhoods. 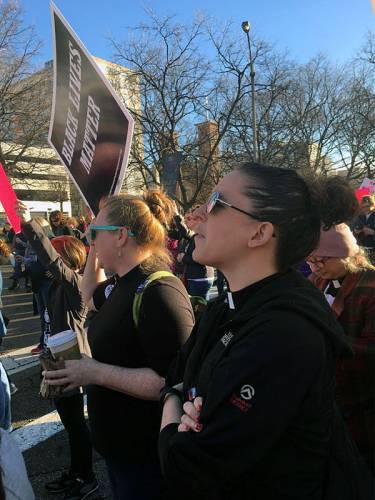 Erin Counihan, left, and Melanie Smith join others at a protest in 2017. Lisa Thompson

“It got me outside of my bubble,” she said. “It helped prepare me to not pretend to know what was going on in my own neighborhood and city.”

Growing up in an upper-income home in Kirkwood, Missouri, Frank realized how sheltered she’d been. She’d gone to public school but didn’t get a holistic understanding of her privilege until she participated in the Urban Plunges at the Amen House.

“I was shocked at first, which motivated me to want to help,” Frank said, adding that she realized “how much work had to be done.”
“It’s disheartening at times and sad,” she said. “It doesn’t change overnight.”

She began having conversations with her parents about what she was seeing and what she had experienced. Her mother started going with her to some of the nonprofit organizations she had volunteered for after the Urban Plunge, and her father started working in a program at Ladue Chapel that helps people get released from prison and get back on their feet.

“My family and I have a whole new perspective,” Frank said. “It’s so hard to come out of poverty in such an unjust system.”

According to the report, the neighborhood to the south was 70 percent white. Average home values were $310,000, and 67 percent of adults had bachelor’s degrees. To the north, which was 99 percent black, average home values were $78,000. Only one in 20 had college degrees. Ferguson is north of the divide. The officer who shot and killed Brown lives in a suburb south of the divide. 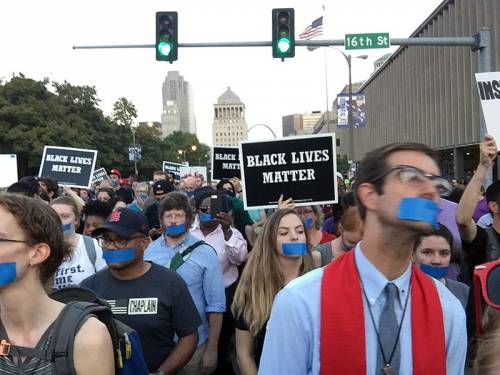 Counihan hopes those who have participated in Hands & Feet, whether protesting at the 2017 “Blue Silence Is Violence” march or sorting clothing, will take what they have learned back to their communities. Courtesy of Erin Counihan

Since Brown’s death and the Ferguson uprising, public attention has focused on systemic racism and its impact on multiple issues, like homelessness, food justice, public safety, policing and public education.

Counihan says the movement has created an honesty that’s needed — but not always seen — in churches.

“People on the street are fighting for the person next to them. It’s about wanting the absolute best for each other and our community,” she said, adding, “In this moment, the city is willing to face the issues of our time. It’s exciting and faith-giving. God is doing something new in this place.”

Counihan hopes General Assembly attendees who participate in Hands & Feet will take the lessons they learn in St. Louis back home with them. And also ask these questions:

Where are there similar issues and problems?

Indeed, the “Show Me” state has shown the world that racism is still an evil needing to be confronted and eradicated.

But while the shooting of Michael Brown, the riots in Ferguson and the ensuing public scrutiny are now part of Missouri’s history, a new narrative is being written.

It’s a narrative of hope that is being told through the work of many Presbyterian hands and feet, and it will continue being written long after General Assembly is over.

Tips for becoming the hands and feet of Christ in your community:
► Don’t go solo. Team up with others who are already assisting those in need. Remember, mission is not about reinventing the wheel — and many groups would welcome the extra hands.
► Offer more education. Tap into the many resources offered by the Presbyterian Mission Agency. There are resources for gun control, dismantling racism, fighting hunger. Go to presbyterianmission.org/programs-services.
► Get out into the community. Hold meetings in a local coffee shop, go on a prayer walk in the neighborhood and notice who is on the street.