It was just another Sunday morning in the Cornhusker State. The faithful entered Southern Heights Presbyterian’s sanctuary, filling the cavernous room with chatter before the start of worship. The bell chimed and the chattering — as well as the rustling of coats, worship bulletins and those flipping through the hymnals and marking the hymns for the day — subsided. The Christ candle was solemnly lit, leaving a flickering flame to aid in prayerful contemplation. The prelude broke the silence. It was time to stand for the Call to Worship. Now sit for the Confession. And back up again for the singing of the Gloria Patri.

It was just another Sunday morning for many in this Lincoln, Nebraska, congregation. But for little Kenny, this Lord’s Day was very different. For the first time in his young life, he wasn’t distracted by noise or movements around him. He folded his hands in prayer as the other worshippers did and followed along with the unison prayer. He did so because the church’s new bulletin featured icons at each part of the service, indicating what to do. 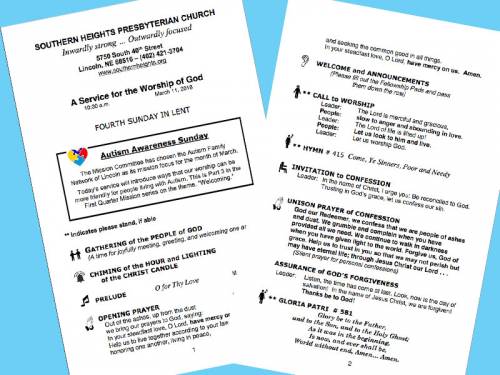 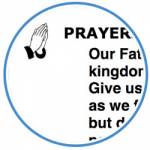 “Kenny looked at the picture of the prayer hands in the bulletin and followed along. It was the first time he has done that,” said the Rev. Leanne Masters.

Masters is not just a proud pastor speaking of a first-grader who was diagnosed with autism spectrum disorder in 2016. Masters is also Kenny’s mother.

Soon after the diagnosis, Masters shared the news openly with her church family, explaining the best she could what might be expected. But that wasn’t easy.

“There’s a reason why it’s called ‘autism spectrum disorder’ — that’s because the behaviors look different for each person. There’s a spectrum of behaviors,” Masters said.

After she shared the news, the mission committee asked Masters how they could support her family. With a long-standing commitment to missions, tithing 10 percent to both local and international causes, the team decided it was time to become advocates for autism.

A representative from Autism Family Network, an organization in Lincoln, was invited to talk to the congregation. What they heard was troublesome.
“We discovered that there were congregations that actually asked families to leave because of disturbances during worship,” Masters said.

Masters explained that disturbances can happen because churches are sensory-heavy places, with a cacophony of sounds — voices speaking and singing, together and solo — and smells of smoke from candles being extinguished, water being poured into baptismal fonts, and so on.

“There’s a lot going on to process and for those with autism, sensory overload can result in behavioral issues,” Masters said. “When we heard there were families being told to leave their churches, we knew we had to do something.”

The first step the mission team took was to explore how to engage people with autism spectrum disorder on a Sunday morning in a way that they and their families would feel welcome, safe and supported.

“We wanted to make our worship service friendly,” Masters said.

Southern Heights began with its worship bulletin, which like many is heavy on text, and simplified it, adding visual cues to help show what is happening in the service.

While the visual cues are helpful to people with autism spectrum disorder, Masters says Southern Heights is also reaching many others as well. The visual cues, she explains, help pre-readers, new worshippers who are not familiar with the order of service, English language learners and even those with dementia or showing signs of early Alzheimer’s.

“The icons trigger a part of the brain that helps people connect with what is going on around them,” Masters said.

The bulletin, though, is just the first step. Southern Heights is also developing a visual schedule for worship where people can move images to the “completed” category when done, so there is a sense of security by knowing what is happening and what is next. The mission team plans to use three-ring binders, laminated cards with images on them and Velcro strips so the cards for the visual schedules can be moved around.

Weighted lap blankets, which can calm and center those with sensory processing disorders, are also coming to the Sunday service.

“You can now see these weighted blankets being advertised on TV. The weight does help soothe a person,” Masters said. She shared that many times, while in the grocery store, she and her husband would stop their shopping to give a tight hug to their son, who was getting agitated by all of the sights and sounds in the store.

Currently, the crafters of Southern Heights are sewing lap blankets with weights inside that will be available in the sanctuary.

Masters says the church is only at the beginning stages of giving people with differing needs the tools they need to feel part of worship.

“There is much more we can do to create a space in which to welcome all,” she said.