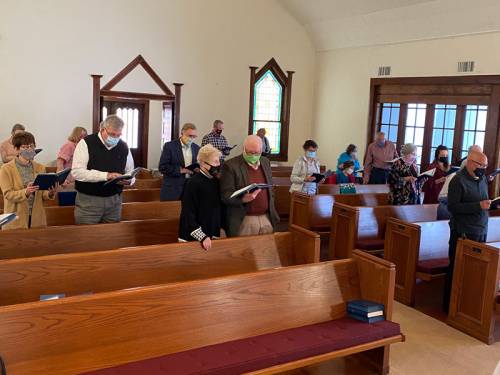 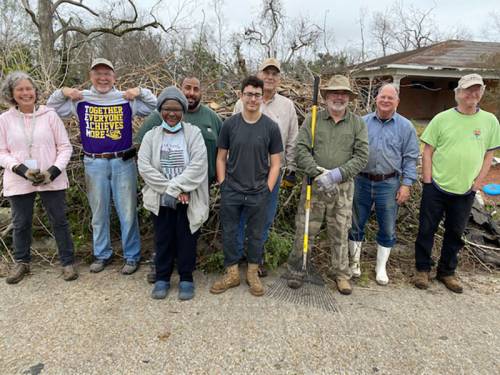 The challenges of hurricanes and a pandemic haven’t stopped the congregations from First Presbyterian and Gracepoint Christian Fellowship from moving forward in building a new house of worship. Courtesy of Angie Kay Dilmore

Like many churches across America, First Presbyterian Church of Lake Charles, Louisiana, had long been on a downward spiral, struggling with an aging congregation, declining membership and dire financial concerns. Each year, the budget deficit expanded, insurance costs for the large gothic-style church building escalated and pledges plummeted. Cultural and demographic changes had also seeped into the social and spiritual fabric of their neighborhood, instigating a slow decline of the once-vibrant community of faith.

When the Rev. Chandler Willis came to the church as pastor in 2011, he knew something had to give. Clearly, the church could no longer afford to maintain ministry in such a behemoth of a building. The pastor quickly realized his role would be that of “helping the congregation face reality and make decisions that were necessary, and encourage them to take action, not just talk about it.” A year into his pastorate, First Presbyterian made the agonizing decision to sell their building in 2012. After a decade or so of denial or reluctance to recognize the reality of the situation, it was not surprising that emotions ran high.

Founded in 1888, the church had thrived in the city for over a century, historically with hundreds of parishioners crowded into the pews each Sunday. Many “cradle roll” members had spent their entire lives at First Presbyterian and couldn’t imagine worshiping anywhere else. Several once-devoted members were so disheartened by the decision to sell the building that they abandoned the church altogether. Yet, for the small but determined remnant, a “For Sale” sign on the property would not mean the end of First Presbyterian’s legacy. Though it took three years to find a buyer for the building, through much faith and lots of prayers, the congregation began the arduous process of seeking a new place to worship in 2015.

As this was happening, on the same street just several blocks south of First Presbyterian, a Disciples of Christ denomination, First Christian Church, had been experiencing a similar fate as First Presbyterian, but with even fewer members and resources. Their congregation had become so small, they worshiped in their fellowship hall rather than their sanctuary.

The two small, needy churches in the same neighborhood had one big God at work bringing them together through two longtime friends. George Swift of First Presbyterian and R.B. Smith of First Christian had known each other for years, and when they came to realize the predicament their respective congregations were in, they began to broker an arrangement. First Presbyterian would pay First Christian rent for the use of their sanctuary and one wing of the building. It was a perfect match — one that everyone presumed would be temporary. But God had other plans.

First Presbyterian had intended to share space with First Christian only until they could either purchase an existing space (i.e., a smaller church building, warehouse space, a storefront, a house that might be converted) or build a new worship facility. This plan proved to be more of a challenge than they expected. Despite a building fund coffered from the sale of their former property, they found few viable options. As a year passed, members of both congregations became comfortable with the two churches, one building arrangement. They even became friends. “The reception First Presbyterian received when we moved in was a true demonstration of Christianity,” said Swift. “First Christian openly shared their facility and we got along fine.”

While they remained distinct and separate churches, they would sometimes worship together on special occasions, such as Christmas Eve. They shared potlucks for Easter morning brunches and participated in joint Bible studies. Sharing the church building became an easygoing, spiritual cohabitation.

The Rev. Vince Endris arrived at First Christian soon after First Presbyterian moved in. Initially, he was confused by the arrangement. But as he thought more about their situations, he realized it was not so odd after all. “This partnership between churches is exactly the kind of partnership that Christ prayed for when he prayed ‘that they might all be one.’ We are different, but the same. We might disagree on the finer points, but we all seek to serve the same Lord. The Disciples of Christ was founded on the principle of creating unity among Christians. This partnership exemplified that unity,” said Endris.

As they two congregations got to know one another, they soon discovered that both aspired to relocate from the current neighborhood. Smith said the congregation of First Christian had studied church growth trends for 40 years. “Each year, the data indicated that we should move from an aging neighborhood to a growth area. However, we were never in a financial position to make a move,” he said. First Presbyterian, though, had the means for such a move, as their pockets were lined with the proceeds from the sale of their building.

Swift and Smith once again brainstormed and devised a plan they thought just might work. The two churches agreed to move forward and continue to share worship space in a new facility. They formed a corporation called First Churches United that would own and manage the building, attend to legal and financial matters, and allow each congregation to focus on mission and spiritual aspects of their separate congregations.

The next step was to purchase property. In 2016, a new developing residential community in Lake Charles called MorganField expressed an interest in having a church established in the heart of their neighborhood. They liked the two churches, one building plan and offered a good deal on the land.

After purchasing the property, the churches made efforts to connect with the residents of MorganField well before the doors of the new building were opened, let alone built. They expanded an existing reading tutoring program at the elementary school near MorganField. They offered a public Ash Wednesday service, including “Ashes to Go” on the empty church lot, hosted an Easter event for the children of the neighborhood and went Christmas caroling.

While securing the land to build upon was relatively easy, the process of building a new facility wasn’t free from challenges. Because Lake Charles is a mere 30 miles inland from the Gulf Coast, the Army Corps of Engineers required an extensive, time-consuming wetlands survey before they could break ground. Hiring an architect and having plans drawn up, accepting bids and hiring a contractor all took longer than either church anticipated. Also, due to large industrial expansions and increased home construction in southwest Louisiana, costs to build the new facility were twice what was originally estimated. In order to move forward with the construction of an actual building, First Presbyterian secured a loan from the Presbyterian Church (U.S.A.) Investment Loan Program.

The congregations finally broke ground in March 2020, just in time to welcome the arrival of a global pandemic that slowed construction and community building. Both congregations quickly and creatively devised ways to stay connected. During the height of the pandemic’s lockdown, First Presbyterian held virtual church via livestream. When restrictions eased, they continued virtual services and cautiously resumed in-person worship following strict social distancing guidelines and mask-wearing.

In mid-August 2020, the exterior of the new building was nearly completed. With great anticipation, the churches had expected to conduct their first services in the new building by Advent 2020. But on Aug. 27, Lake Charles took a catastrophic direct hit from Hurricane Laura. This category 4.9 storm was reportedly the most devastating hurricane to impact the region in over 150 years, and the fifth-worst storm in history to affect the United States. The church building suffered damage — several walls of bricks were blown off the exterior and there was some minor interior loss. Construction came to a halt due to evacuated construction workers and power outages lasting three weeks or more. Lack of manpower and availability of materials hindered progress. At that point, instead of a new little church awaiting completion, an entire city needed to be rebuilt. Those rebuilding efforts were put to the test just six weeks later when Hurricane Delta dealt a second blow to southwest Louisiana. Worshiping in the new building by Advent was not going to happen. Nor was the prospect of being in a church building for the season of Lent 2021 a possibility, as a rare winter storm in February brought with it plummeting temperatures and pelting ice and snow. Power lines were down, and water pipes were busted all throughout the region.

Through it all, though, the two congregations that had already been through years of battling the storms of declining membership and dwindling resources are keeping the faith. Both First Presbyterian and First Christian, which is now called Gracepoint Christian Fellowship, are hopeful that their building will open in May. And when that building does open, it will be under the name Harvest Community Center — a place where not just two congregations come to meet and worship, but where gathering space will be available for all in the MorganField development.

“No matter what has happened in the past, God indeed promises [both congregations] a future,” said Willis. The pastor also hopes First Presbyterian’s and Gracepoint’s venture might “illustrate an example for other small-membership churches to consider” and “to partner with other churches and forge new futures together.” After all, nothing is impossible with God, and there really is a first time for everything. Just ask any member of either First Presbyterian or Gracepoint Christian Fellowship.

Angie Kay Dilmore lives in Lake Charles, Louisiana, with her husband and two cats, and is a member of First Presbyterian Church of Lake Charles. She’s a Yankee transplant who loves the food, music and unique culture of the Bayou State, but hurricanes … not so much.