Volunteers provide joy and get joy in return 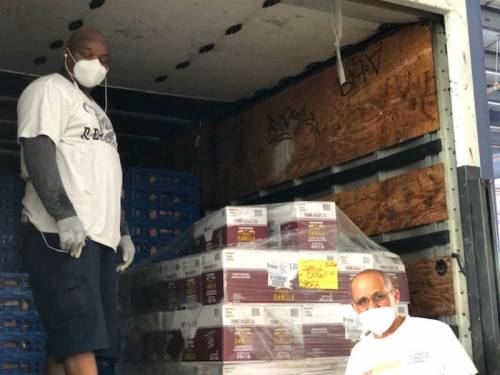 Through an outreach initiative called Operation Neighborhood, items such as toothpaste, deodorant, shampoo, underwear, stationery, coffee packets, ramen noodles, colored pencils, crayons and books were brought to the women of Bedford Hills and Taconic Correctional Facilities. With the support and generosity of many, life for our women was made easier and their dignity affirmed. Courtesy of Interfaith Prison Partnership

If a highway can be adopted, why can’t a prison? This question occurred to Dr. Hans Hallundbaek a few years ago after he noticed an “Adopt-A-Highway” sign. The more he thought about it, the more sense “Adopt-A-Prison” made; after all, people adopt children, animals and parks — and the list goes on.

Hallundbaek is director of the nonprofit Interfaith Prison Partnership (IPP), an outreach of the Hudson River Presbytery, headquartered in Katonah, New York. He previously served 13 years as pastor of Croton Falls Presbyterian Church in Croton Falls, New York, before retiring in 2018 to focus on the work of IPP. Born and raised in Denmark, Hallundbaek has served as a teaching volunteer in New York state correctional facilities for more than two decades, including several years as a worship service chaplain at Sing Sing maximum security prison in Ossining, New York.

He and his wife, Katherine Vockins, both left successful jobs in the business world when each felt a midlife call to prison ministry: Hallundbaek to education and, a couple of years later, Vockins to the creative arts. Together they co-founded Rehabilitation Through the Arts (RTA) at Sing Sing prison in 1996. RTA teaching artists lead workshops and theatrical performances in six New York state prisons. This year-round training — in theater, dance, music, creative writing and the visual arts — has made a difference. Of the more than 800 RTA alumni to date, less than 7% have returned to prison, compared to a national recidivism rate of around 60%.

In 2017, Hallundbaek and the Rev. Dr. Alonzo Johnson, coordinator of Self-Development of People, part of the Presbyterian Church (U.S.A.)’s Compassion, Peace & Justice ministry, introduced IPP’s Adopt-A-Prison concept during a workshop they led at the PC(USA)’s Big Tent gathering in St. Louis. “Creating awareness about the manifold issues related to incarceration is important work, and getting communities and churches engaged in the work and involved in the lives of those who are incarcerated is an integral part of that work,” said Johnson, a former volunteer prison chaplain at Luther Luckett Correctional Facility in La Grange, Kentucky. 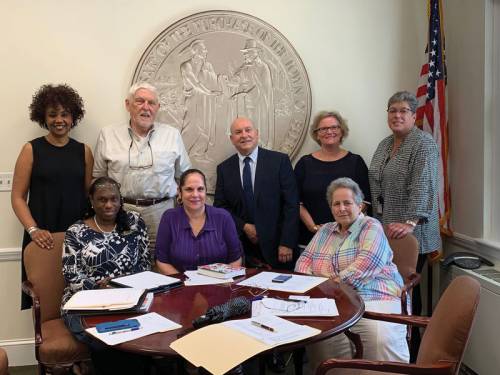 Hallundbaek and his colleague Sharon Griest Ballen, IPP’s program coordinator and a former elder and deacon at Katonah Presbyterian Church, spent two years planning a town hall launch of Adopt-A-Prison in the town of Bedford, New York, north of New York City. They made sure to include key stakeholders in the planning, including the town supervisor, Chris Burdick, and the superintendents of Bedford Hills and Taconic correctional facilities for women, which are both located in Bedford and are home to more than 1,000 of the town’s 18,000 residents.

The town hall launch event, held in fall 2019, was attended by more than 100 community members, as well as political and government leaders, and representatives of 18 organizations with successful working relationships with the prisons, such as Puppies Behind Bars, a service dog training program. In January 2020, the Bedford Town Board unanimously approved the creation of a Prison Relations Advisory Committee (PRAC) and asked Ballen to serve as its chairperson. PRAC currently has 18 members, including religious leaders, prison volunteer organization representatives (including academic, rehabilitative and reentry programs), a local business owner and elected officials.

Bedford is currently the only town in the United States that has a committee that exists specifically to advise it on prison issues, Ballen said. She describes PRAC’s mission as “soap to sidewalks,” explaining that the committee’s goal is to advise the town board on both micro and macro issues.

“On a micro level, my feeling was that most (not all) people in the town of Bedford could probably afford to buy an extra bar of soap for a woman in prison — as just a treat, something to say we’re thinking about you, we remember you, you deserve something nice,” Ballen said. On a macro level, PRAC is working with local, state and federal governments to build a sidewalk from the train station to the prison. The road that connects the station and prison is heavily traveled, with no sidewalk and a deep ravine alongside, posing dangers for staff and visitors. Thinking back, Ballen said, “When IPP proposed the concept of a town adopting its local prison, little did we know how lifesaving that idea would be.” 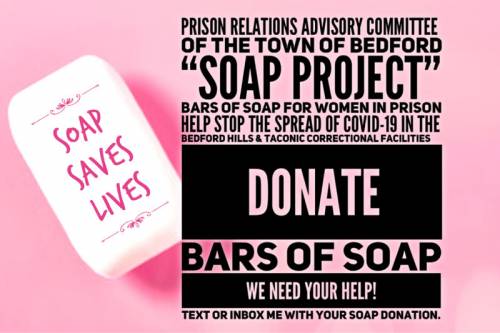 Most churches, says Dr. Hans Hallundbaek, director of the Interfaith Prison Partnership, have a prison within 30 miles; thus, there are many opportunities for congregations to “adopt-a-prison” and provide items, like soap, to cover extensive handwashing in a time of pandemic. (karenblacks.com/design-on-the-side)

After PRAC’s initial meeting, just before the COVID-19 pandemic created havoc worldwide, Ballen’s idea of “soap” took on a whole different meaning. PRAC collected donations of more than 20,000 bars of soap for frequent handwashing; 10,000 masks for adults; 1,000 colorful masks for visiting children; 2,400 antibacterial wipes; 22 hot plates to allow for socially distanced cooking on units; 1,000 bottles of hand lotion; 1,000 sets of individual plasticware, so each woman could wash and reuse her own utensils; yarn for knitting; stationery and cards donated by the local Katonah Thrift Shop; and a donation from an Episcopal Church in Bedford to purchase postage stamps to help the women stay in touch with their families.

The need is great

Hudson River Presbytery is home to 11 of New York state’s more than 50 prisons. “Currently about 20% of the presbytery’s 77 congregations are involved in some form of prison outreach,” Hallundbaek said. He quickly gives credit for this ministry to the Rev. Dr. Susan Andrews, who served as general presbyter in 2006–2015 and as moderator of the 215th General Assembly (2003). It was Andrews who said, “We have to start an outreach,” when she realized more people were in prison within the presbytery than in the pews at that time.

The United States accounts for only 5% of the world’s population, yet it is home to 25% of the world’s prison population, which is heavily skewed toward people of color and people experiencing poverty. Currently there are about 2,000 state and federal prisons incarcerating more than 2 million people nationwide. In New York state, the annual cost of imprisoning one inmate is more than $69,000, according to the Vera Institute of Justice, an independent nonprofit research and policy organization.

“If we can get 10% or even 5% of our churches involved, one by one they can learn from each other,” Hallundbaek said. “It’s a relatively easy ministry because we know where they are. They are not running away, and they are hungry for contact, for spiritual learning, for hope.”

The New York State Council of Churches and the International Prison Chaplains Association have expressed interest in replicating Adopt-A-Prison in upstate New York and in Africa, respectively. “We hope that eventually every community in the world will have an Adopt-A-Prison program to support its local prisons,” Ballen said.

Most churches in this country have a prison within 30 miles, according to Hallundbaek. He pointed out that if a church wants to reach out to disenfranchised people, “you have a prison with 500 to 1,000 people anxiously waiting for you to come and visit.”

“I bet you Jesus worked with the poor and the downtrodden and the widows and the children, and so on, because it gave him joy,” Hallundbaek said. “He didn’t say, ‘Oh, I am a good man, I have to go in and do this good stuff.’ No, he did it because he gave them joy, and they gave it back to him.”

Speaking from personal experience and from the experience of fellow ministers and volunteers involved in prison ministry, Hallundbaek added, “That’s why we do it. That’s why we do any kind of ministry. If you just do it to go in and convert them and so on, forget that. That’s not the point. If you do the right thing, they will be converted because you get joyful, and they’ll pick up on that.”

One inmate wrote, “I broke into tears when I got a piece of soap because I realized that somebody was reaching out to me.” Her thank you note was shared with those who donated the soap, and more tears were shed, establishing a sacred connection, a bridge between people who have never met. “It can hardly be more Gospel than that,” Hallundbaek said.