Building a Life of Faith. Support the Pentecost Offering..
Make A Donation Click Here >
Home › What ‘laying down our lives’ looks like 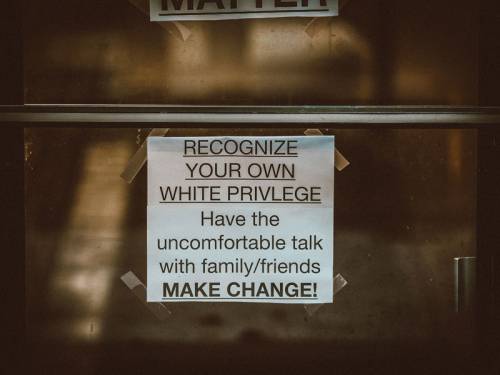 I just don’t want to have to feel guilty being white. That’s what John said after my presentation at a family retreat I was facilitating for a church a few years ago. I was talking about the advantages that whites enjoy in American society that people of color do not always receive, referencing a classic article by Dr. Peggy McIntosh titled “White Privilege: Unpacking the Invisible Knapsack.” In it, she points out that whites can typically agree with statements like, “If a traffic cop pulls me over, I can be pretty sure that I haven’t been singled out because of my race,” or “When I am told about our national heritage or ‘civilization,’ I am shown that people of my race made it what it is.”

As I was going through some of these statements, John interrupted me, saying that he didn’t really care about any of the advantages that McIntosh details. As soon as the talk was over, he said those words to me about not wanting to feel guilty because he’s white. I asked him how I could help him get over that guilt. He suggested I simply say that I was not trying to make people feel guilty. I did that, but I wish that instead I had pointed him to 1 John 3:16–24, as it has so much to offer concerning the issues that John and I were wrestling with.

The Scripture reminds us that “God reassures our hearts … whenever our hearts condemn us … God is greater than our hearts” (vv. 19–20). The good news of the Gospel is that God forgives our sin in Jesus Christ. God does not want us to dwell in fear, wondering if grace could somehow be ours. This includes the sense of guilt that often creeps up on us who are white whenever we discuss issues of racial justice. This remorse sometimes prevents us from even entering into these conversations. But it is our confidence in God’s grace that can lead us to lives of gratitude, which join Christ’s mission to the world.

A couple of months ago, a friend showed a socially distanced group of us a YouTube video that mocked Vietnamese siblings’ accent. I was shocked as everyone laughed and joined in with their own imitations, but I remained silent. A young woman in the group, however, spoke up with a stern “Hey, that’s not cool.” The mocking stopped, but it could have easily ended up with this brave woman being insulted herself. In that moment of speaking up, she exhibited what laying down her life looked like. And I was grateful.

“Let us love, not in word or speech, but in truth and action” (v. 18). This verse challenges me to realize that talking with like-minded friends or writing columns like this is a good start, but not nearly enough. We can learn all we want about the racial disparities in our country. We are good at researching, reading and holding book studies and discussion groups. But our passage, however, challenges us to move beyond learning, beyond talking and beyond bemoaning the need for change. If we are to bring about change, then we must learn how to love not just in word or speech, but in truth and action.

Chip Hardwick is the transitional synod executive of the Synod of the Covenant, which includes presbyteries in Michigan and Ohio.