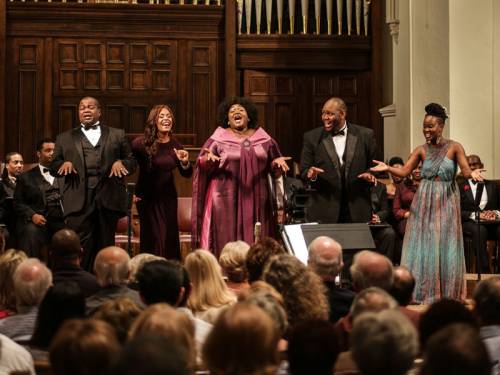 Prior to the pandemic, the American Spiritual Ensemble performed at First Presbyterian Church in Lexington, Kentucky. While live concerts have been pushed back in 2021, there are plans for a virtual performance. Courtesy of Kentucky Educational Television 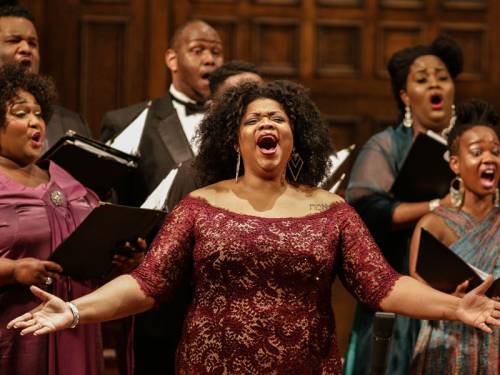 The spiritual is a genre that has influenced American music from jazz to gospel to the blues. The American Spiritual Ensemble brings these songs to a new generation. Courtesy of Kentucky Educational Television

The staff of First Presbyterian Church in Lexington, Kentucky, was planning Sunday worship, and the Rev. Dr. Lee Bowman was a bit stuck on the children’s moment. It was to be about the story of Moses parting the Red Sea for the Israelites fleeing Egypt, and she wasn’t sure what to do. The church’s interim music director, Dr. Everett McCorvey, volunteered to take on the task.

Sitting with the children, he talked about the Israelites being freed from slavery and related it to enslaved African American looking to God for freedom. He told them about Negro Spirituals — the songs enslaved African Americans sang in the fields — and how they often contained hidden messages, like “Swing Low, Sweet Chariot” signaling the start of the Underground Railroad.

“The kids’ eyes were like saucers,” Bowman said, adding that the congregation was similarly engaged. It was one of the early moments in the long-term relationship between the predominantly white downtown church, McCorvey and his personal mission to preserve the American Negro Spiritual.

While McCorvey, director of the University of Kentucky Opera Theatre, was at First Presbyterian, he talked to Bowman about a group he had: the American Spiritual Ensemble (ASE).

Founded in 1995, it was a choir of a couple dozen professional and graduate student singers that specialized in presenting spirituals such as “Wade in the Water” and “Walk Together, Children.” It was born out of a request he received to take a group to Spain to perform some Negro Spirituals. It didn’t take long for the group’s calendar to start filling up with requests for engagements around the country.

Its schedule was to gather in January to rehearse and then tour, through March, and also tour Europe in the summer and present a small fall tour. As the group grew and relied more on professional singers, the overhead — particularly for those rehearsal periods — became an issue. That’s when Bowman offered First Presbyterian Church to be the ensemble’s home base.

“I said, ‘We would love to be your hosts,’” said Bowman, offering the group the use of the church for rehearsal as well as office space. Hosting also included lodging for visiting singers with church members.

McCorvey admits he was initially skeptical about Bowman’s idea of his singers staying with church members. “I was pretty sure she wouldn’t have a lot of takers to open their homes,” he said.

While McCorvey was already a revered figure in the Lexington arts community by that time, in the early 2000s, he had some encounters with racism in the city that gave him pause. Nearly 20 years later, he is happy to say his fears were not realized. Church members opened their homes. The partnership “created new friendships,” McCorvey said.

“ASE helped our congregation open its doors and its hearts,” said Bowman. “We provided logistical support. We can’t claim credit in any way except in the form of love. We wanted to celebrate them.”

In addition to places to sleep, church members provided meals, transportation — sometimes giving members keys to their cars — and enthusiastic audiences for the ensemble’s concerts, which have grown into annual events in Lexington.

Now, ASE has a roster of more than 100 singers McCorvey can call on when putting tours and concerts together. They include distinguished educators and directors as well as world-class singers with credits on the world’s most prestigious stages. When the Metropolitan Opera revived “Porgy and Bess” in its 2019–20 season, McCorvey says there were 28 singers on the ASE roster in the cast or chorus of the production.

McCorvey was in the chorus of the Met’s early-1980s revival of “Porgy,” which is where he met his wife, Alicia Helm McCorvey. It was a long way from his roots growing up in Montgomery, Alabama, in the 1960s and ’70s in the midst of the civil rights movement.

In both of those churches, the young McCorvey was exposed to singing Negro Spirituals and anthems and hymns. The young boy also began noticing how the Rev. Dr. Martin Luther King Jr. would quote spirituals all the time.

“So, I grew up on these songs of faith and songs of hope, and they were an important part of my life. They meant so much to me, so I wanted to make sure they meant as much to others,” he said.

McCorvey, though, didn’t find that sharing Negro Spirituals with others was his life’s direction until he was finishing work on his doctorate at the University of Alabama, where he became the first Black student to receive a doctorate in music. He attended a world music concert at the university that got him thinking. “It spoke to my soul. It was life-changing,” he said. “I realized I was learning music in a Western European tradition, but I wasn’t learning my own music. I decided if I was getting the highest degree in my field, I needed to know my own music.”

Before Negro Spirituals, McCorvey points out that American music was largely influenced by Western European tradition. But the influence of spirituals can be seen in forms like jazz, gospel, blues and other popular genres. “Call-and-response, which you hear in all kinds of music, comes directly out of spirituals,” said McCorvey.

At First Presbyterian Lexington, Marlon Hurst, director of music and arts, says a Negro Spiritual is always somewhere in the choir folder, and the church has been blessed to learn more about the genre from McCorvey. “As a white, male Southerner who went to a southern school, I approach spirituals with some trepidation,” said Hurst. “What is it like for a choir of middle-class white people singing the songs of enslaved African American people? When we sing William Dawson, I follow his directions to a T, because it’s not my place to interpret.” Dawson was an African American composer most noted for bringing a Carnegie Hall audience to its feet on Nov. 20, 1934, after listening to the composer’s new work, the “Negro Folk Symphony.”

Hurst explains, though, that when McCorvey guides singers in a spiritual, he helps them to understand the underlying motives of the songs. Just singing the notes and not understanding the source does not do the songs justice, Hurst pointed out, adding, “When Everett [McCorvey] conducts spirituals, they are much more malleable. He brings such knowledge of performance.”

With the uprising against police violence and systemic racism this past summer following the police-related deaths of George Floyd in Minneapolis, Breonna Taylor in Louisville and many others, McCorvey sees a renewed place for spirituals in the United States’ national discourse in what he sees as the second civil rights movement. He and members of the ASE have spoken out personally regarding systemic racism and violence against people who are Black. The ensemble has also recorded several virtual choir videos in response to the violence.

Like all other performing arts groups, though, the COVID-19 pandemic cut off touring for the ensemble in March 2020. McCorvey says most of its early 2021 dates have been pushed back to 2022. But that is not stopping the ensemble from singing. A virtual concert is being planned in early 2021 in collaboration with author Eileen Guenther and her book “In Their Own Words: Slave Life and the Power of Spirituals.”

As for the ensemble itself, things have shifted in recent years. In 2014, McCorvey was appointed artistic director of the National Chorale, an ensemble that performs major choral works at New York City’s Lincoln Center. With many of the ensemble’s singers based in New York, a lot of the group’s rehearsals now take place there. But its ties to Lexington, Kentucky, remain. The group’s music library is still at First Presbyterian. The ensemble also records at the church, presents annual concerts there and rehearses there when it is in town. What’s more, McCorvey is a church elder and has served on the session in the past. He also joined First Presbyterian’s choir shortly before the pandemic struck and the church suspended in-person worship. “He said, ‘I’m doing all this directing now, I need somewhere to sing,’” said Hurst.

More than just adding to the music of the choir, Hurst says McCorvey’s presence has opened the church to the issues and pain of racism that the songs illuminate. When McCorvey writes about systemic racism, “our members read it and take it seriously,” Hurst says.

“He changed our culture. We can offer a class on ‘White Fragility’ [the book by Robin DiAngelo] and people don’t get defensive,” said Hurst.

Bowman, who herself made history as the first female head of staff at First Presbyterian Church, is now retired, living in Greenville, South Carolina. She sees the relationship she forged with McCorvey and the ASE as one of the highlights of her career. She has many memories of the group. One of her favorites came before one of its annual concerts, when McCorvey gathered the group to pray.

“You can tell by the way a person prays how much they pray and how used they are to the one to whom they are praying,” said Bowman. “Everett was talking to someone he knew very well and someone he loved very much. It came from his gut.” And to quote one of the Negro Spirituals he guides the ensemble in singing, the prayer came from his “sweet, sweet spirit.”

Rich Copley is a communications strategist for the Presbyterian Mission Agency. This story is close to his heart as he covered the American Spiritual Ensemble for 20 years as an arts writer for the Lexington Herald-Leader.

Hidden Messages in songs and the Underground Railroad

“Swing Low, Sweet Chariot” is considered to be a song with hidden messages, referring to the Underground Railroad. The Underground Railroad was a connection of people in various locations helping those bound by slavery to escape. “Swing Low, Sweet Chariot” was said to be a favorite spiritual of Harriet Tubman (1820–1913), who escaped from slavery in 1849. In the 1850s, she made many rescue trips into Maryland to help about 300 slaves escape to freedom.

Most of the code words in the Negro Spirituals refer to escape from slavery; the code words were used to hide the underlying, secret meaning of the lyrics. Coded songs were a way for slaves to share the dream of freedom openly with one another, drawing inspiration and hope from the texts. Without understanding the code, the lyrics appeared to have very different, nonthreatening meanings to the slaveholders.

The refrain and first verse of “Swing Low, Sweet Chariot,” for example, might have been understood in the following ways: