Paying forward the opportunities they received 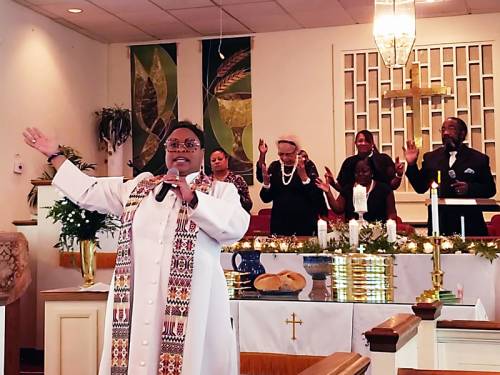 The Rev. Erika Rembert Smith is just one of many women of color who are putting on the mantle of leadership, paying forward the opportunities given to them so that a new generation of women can “lift up their voices and sing.” Courtesy of Erika Rembert Smith

“Some still believe that pastoral ministry is reserved for men,” said Smith, noting that she has experienced “time and again being overlooked, discounted and underestimated” throughout her ministry by men and women — clergy and laity — alike.

Patriarchy aside, these women are also blazing a path forward to a more diverse Presbyterian Church (U.S.A.), taking on the mantle of leadership as senior and solo pastors in a denomination that is still predominantly white. According to the 2018 statistical report of the PC(USA), 89% of its congregations were white and 4% black/African American/African.

As the nation observes Black History Month in February, Presbyterians Today talks to these pastors about the challenges they face and the women in their lives who have encouraged them to be true to whom God has called them to be.

In the words of the hymn “Lift Every Voice and Sing,” often referred to as the black national anthem, written by National Association for the Advancement of Colored People leader James Weldon Johnson in 1900, today’s pastors like Smith, Ridgill and Barbee have “come over a way that with tears have been watered.”

They, like many of their sisters in ministry, bear the burdens of enslaved ancestors even as they are called to minister to descendants of the original sufferers and are called to speak truth some 400 years later amid racial injustices.

One of the voices of the past that has inspired today’s women in ministry is that of Sojourner Truth.

Truth, who escaped slavery and became an evangelist, abolitionist and advocate for women’s suffrage, is a guiding light — a North Star of sorts.

Truth’s interpretation of Scripture, as powerful as it was, did not settle the matter of women in ministry, let alone women of color in ministry.

Women today who, like Truth, say that they are “called by the Spirit” face varying degrees of resistance in seminary and even after they are ordained and enter into church leadership.

Barbee, who was ordained in 2013, shared such a tale about her uncle, who’d been a prominent judge in Baltimore. Upon retirement he moved back to rural North Carolina, joining a Southern Baptist church of his childhood. In preparation for his next chapter, Barbee’s uncle wrote his obituary and requested that she officiate his funeral.

“He knew that I would have issues with the male pastor, but he assured me that I could handle it,” she said.

When the time came for her uncle’s funeral, the pastor of the church was not happy with the already written obituary.

“He wanted to call me a eulogist, an evangelist, a teacher — but not a minister or pastor (as the obituary stated),” Barbee said.

The pastor revised her uncle’s obituary. Barbee, however, resubmitted the original obituary to the funeral home. That was not the end of the story. The day of the funeral, when it was time to process into the sanctuary, the pastor stepped in front of Barbee and gave her a stern reminder that she was in his church, she recalls.

Barbee’s experience is not an isolated one.

Smith was asked by one of her parishioners to participate in her mother’s funeral. The pastor of the church said that was fine, but only if she read Scripture from the floor and not the pulpit, and was called “sister,” not “Reverend.”

Smith is a third-generation Presbyterian. After her college graduation, while attending a non-Presbyterian church, she mentioned the idea of her entering ministry to the pastor who had previously “discerned that I had gifts for ministry.”

“The pastor said that ‘there was no place in ordained ministry for me at that church,’ ” Smith said.

Undaunted, Smith matriculated at Johnson C. Smith Theological Seminary at the Interdenominational Theological Center in Atlanta. Even in academia, though, she found her voice being stifled as she encountered a male professor who “neither acknowledged nor affirmed” her response to a question, but instead affirmed a male classmate who had reiterated her answer.

“I was stunned. I was still trying to find my voice … working to develop confidence in my call as a woman in ministry,” Smith said.

Her stellar education notwithstanding, Ridgill recounted an incident in her ministry where a deacon “purposely sat in the front row during my sermon so that the entire church could see him turn his back to me and go to sleep as I delivered the message.”

It’s been 46 years since the first African American female, the Rev. Dr. Katie Geneva Cannon, was ordained in the United Presbyterian Church in the United States of America, a forerunner to the PC(USA), and 64 years since the denomination ordained its first female minister, Margaret Towner, in 1956. Still, some pastors get resistance from others to their call.

“I constantly face the challenge of dealing with those who believe that a woman should not preach or pastor a church,” Ridgill said.

Despite the slights, slurs and the subtle and not-so-subtle efforts to undermine their confidence and stomp on their aspirations to lead, these black Presbyterian pastors persist in their passionate pursuit of God’s will for their lives.

They press on, they say, toward the mark fortified by the spirits of their ancestors, as well as their grandmothers, mothers, teachers and members of the sisterhood who also preach and pastor.

Barbee and Smith both cited the late Cannon as an inspiration.

“She always made me feel that I mattered,” Smith said.

Barbee was inspired by Cannon’s “no-nonsense approach to life and biblical truths” and her assurance that “my voice needs to be heard fearlessly.”

Ridgill says her mother has inspired her. Ruby Ridgill, a Presbyterian ruling elder, taught her daughter that “glass ceilings were made to be shattered.”

The Rev. Dr. Cynthia L. Hale, senior pastor of Ray of Hope Christian Church, is another source of inspiration for Ridgill.

“She helped me to see that in order to be successful as a woman in ministry, I would not only have to be an excellent preacher, but I would have to be an excellent administrator and leader,” Ridgill said. “She taught me that what happens on Sunday morning during worship is the culmination or pinnacle, if you will, of all that takes place during the week.”

Black women who pastor, as is true for their sisters in other careers, have to contend with not only gender bias, but the racism that plays into their ministry and their daily lives.

“I feel more discriminated against as an African American, but yes, there is female discrimination as well,” Barbee said.

That intersection between race and gender discrimination has given birth to the womanist theology movement that centers on the life experiences of black Christian women. Cannon helped found The Center for Womanist Leadership at Union Presbyterian Seminary in Richmond, Virginia. Cannon died, at 68, a few months after the center, now renamed in her honor, was inaugurated in April 2018.

The Rev. Emilie Townes, professor of Womanist Ethics and Society and dean of the Vanderbilt University Divinity School in Nashville, Tennessee, said, “Black women in America are morally bound to be justice-seeking whole human beings even in the face of being told, sometimes relentlessly so, that they are less than whole, less than human. The moral imperative for black women is to live life beyond those old wounds.”

Smith, Ridgill and Barbee are just some of the women of color who are part of a new generation of Presbyterian leaders who are “living beyond old wounds” of sexism and racism. That takes courage. For in the words of Cannon, “Whenever we cross boundaries, we encounter storms and turbulence.”

Betty Winston Bayé is a motivational speaker, journalist and freelance writer based in Louisville.