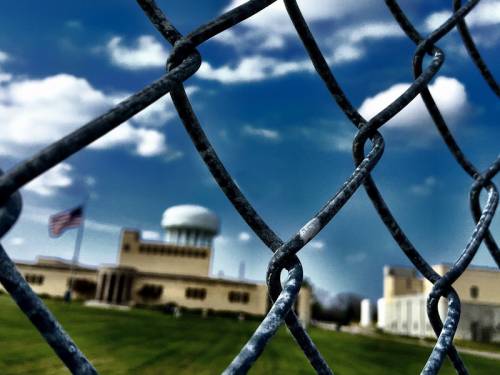 The Flint water tower is featured in the Presbyterian Disaster Assistance’s Story Ministry’s “Flint: The Poisoning of an American City.” David Barnhart

As you travel on a patchwork section of Interstate 75 in Southwest Detroit and cross the River Rouge, this scene emerges before you: towers and tanks spreading out on both sides of the road, constituting a massive Marathon petroleum refinery.

The Environmental Protection Agency defines environmental justice this way: “Environmental justice is the fair treatment and meaningful involvement of all people regardless of race, color, national origin, or income with respect to the development, implementation and enforcement of environmental laws, regulations and policies. It will be achieved when everyone enjoys the same degree of protection from environmental and health hazards and equal access to the decision-making process to have a healthy environment in which to live, learn, and work.”

Although the refinery appears to dominate the landscape, the area also includes steel mills and a coal-burning power plant — all of which affect the nearby neighborhood of Boynton, which National Public Radio in 2017 identified as the most toxic neighborhood in Michigan. Like many neighborhoods that find their air, water and soil contaminated by heavy industry, Boynton is occupied primarily by people of color. And, in Boynton, as is the case in many environmental justice communities, many suffer from diseases that can be caused by exposure to toxic chemicals.  This disproportionate distribution of environmental ills in communities that are economically disadvantaged or are communities of color, or both, is often referred to as environmental racism.

Last summer, members of the PC(USA)’s Committee on Mission Responsibility Through Investment (MRTI) got off the interstate in Detroit and into the Boynton community to find out how industrial pollution is dominating residents’ lives.

“We don’t have one illness; we have multiple, multiple illnesses,” said Emma Lockridge, who lives a few blocks from the refinery and has suffered kidney failure, non-Hodgkin’s lymphoma and respiratory issues. Lockridge’s sister, who lived nearby, died of kidney failure before the age of 50, and Lockridge recalls that their mother had wads of tissues stuffed into her robe pockets because of constant coughing. The coughing stopped, Lockridge said, when her mother moved into assisted living away from the neighborhood. 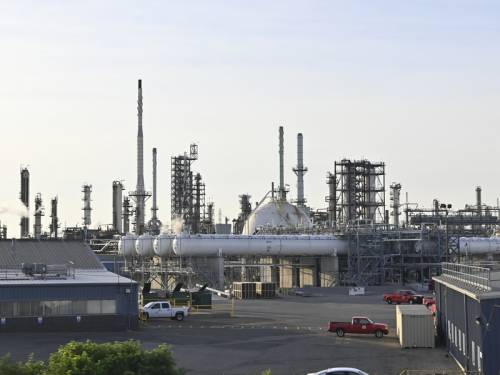 A portion of the Marathon Petroleum Refinery in Southwest Detroit. Rich Copley

Day to day, the residents deal with the refinery odors and black film they say covers everything near the refinery. They also endure the constant traffic of tanker trucks pulling into the refinery to reload and then rumbling out, past the community center.

Lockridge and other residents would like to move rather than live next to the facility that has grown from a little gas company when their parents first bought homes in the neighborhood in the 1950s. But for many, those homes have decreased in value to the point that the residents can’t make enough money by selling their homes to buy a home in a better neighborhood. Among the 11 Boynton homes recently listed on Realtor.com, the average price was $40,927. Some houses are worth far less. And while the company has bought out homes in a predominantly white neighborhood nearby, Lockridge says the company has not given her and her neighbors the same consideration.

“It’s painful to listen to how egregiously they have been treated and disregarded as human,” said the Rev. Kerri Allen, vice chair of MRTI.

The environment and faith

MRTI implements the General Assembly’s policies on socially responsible investing, making sure financial investments are faithful investments that reflect the denomination’s justice work. It is just one of the many Presbyterian ministries listening to people like Lockridge as part of a focus on environmental racism.

“Every Presbyterian needs to care about this issue in the same way we care and act on hunger and poverty and racism — because in fact, environmental injustice is another complex embodiment of these and other societal injustices. And like most justice issues, communities that are already disadvantaged — on purpose, by corporate greed and unfair zoning laws — are disadvantaged in a multiplicity of ways,” said the Rev. Rebecca Barnes, coordinator of the Presbyterian Hunger Program (PHP).

Jessica Maudlin, PHP’s associate for sustainable living and earth care concerns, adds that environmental justice is “core for people of faith as we are called to eradicate the unjust ways some groups of people continually and unjustly bear the burden of societal waste, greed and sin.”

The 2018 General Assembly, in response to an overture from the Presbytery of Monmouth in central New Jersey, approved a policy calling for action to provide resources for churches and mid councils (synods and presbyteries) on environmental racism, along with information on environmentally sound operation of churches and other buildings. The approved overture also called on Presbyterians to “listen to the perspectives and voices of people most impacted by environmental racism, with awareness to cultural diversity domestically and internationally.” This builds on the 1995 General Assembly policy “Hazardous Waste, Race and the Environment,” which drew attention to environmental racism in the 1980s and 1990s.

MRTI, one of the Compassion, Peace & Justice (CPJ) ministries of the Presbyterian Mission Agency, in order to listen to impacted communities as instructed by the 2018 overture, visited Lockridge and her community in Detroit. In addition, part of a recent CPJ staff meeting included field study of the denomination’s home base, Louisville, revealing environmental justice issues in communities of color similar to what MRTI witnessed in Detroit. 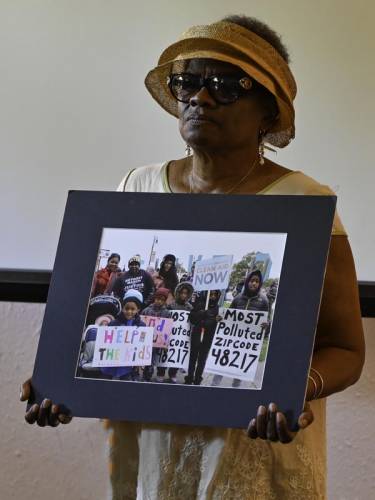 Emma Lockridge said the children in her neighborhood are why she is fighting Marathon Petroleum. Rich Copley

Water is the focus of a story being told in a new documentary from Presbyterian Disaster Assistance’s Story Ministry, “Flint: The Poisoning of an American City.”

The film, which will be available on streaming services such as Amazon Prime and iTunes in January, came out of the Presbyterian Disaster Assistance (PDA) response to the Flint water crisis, which first made national headlines in 2015 when people in the Michigan city began to fall ill as lead from aging pipes and other contaminants seeped into the city’s water system.

PDA’s national associate for disaster response, Rick Turner, understood that water crises had the potential to become more frequent and alerted Story Ministry director David Barnhart that the subject would resonate beyond Flint.

One issue the film addresses is how the water crisis disproportionately impacted low-income people of color in Flint, while corporations such as General Motors and wealthier residents were able to shield themselves through actions such as paying for repairs or moving.

“I can’t afford to move, I can’t afford to stay there, I can’t afford to keep paying for water I can’t use,” Flint resident Barbara Noyce says in the film. She details how she is now fighting a variety of ailments from the lead poisoning, but she can’t get away from the water. “You got to take baths, you got to do laundry, you got to clean house. What do we do when we’re in this state? There’s nothing you can do. Live one day at a time and wonder when it’s going to kill me, I guess.”

First Presbyterian Church and Trinity United Presbyterian Church in Flint have played pivotal roles in helping local residents cope with the crisis. The churches have distributed bottled water and water filters, plus helped to organize the initial Fresh Water Flint Festivals to help connect citizens with resources in the community. First Presbyterian’s counseling center has also helped people suffering from the trauma of the water crisis and its health impacts. Those services include compassion-fatigue counseling for caregivers.

“We see these things happen on TV, and you just turn the TV off. But when you have to live it every day, it becomes lonely and isolating, and you do feel forgotten,” said the Rev. Desiree Lawson, who for eight years served as pastor of Trinity United Presbyterian Church in Flint. “It’s like ‘crisis’ and ‘racism.’ Those are words that have lost their sense of urgency. It’s normal.”

The issue of environmental justice will be at the forefront during the PC(USA) Compassion, Peace & Justice Training Day and Ecumenical Advocacy Days in Washington, D.C., this spring. The events will focus on climate and the environment with the theme “Imagine! God’s Earth and People Restored.” CPJ Training Day is April 24, and Advocacy Days are April 24–27.

Barnes says environmental justice is a concern that different denominations have used for collaboration for decades, as part of the National Council of Churches’ eco-justice working group, which has now become the organization Creation Justice Ministries.

“Our main mission is to connect religious leaders with decision makers on matters that are most important to the churches,” said Shantha Ready Alonso, the executive director of Creation Justice Ministries.

While the environmental justice movement is gaining prominence because of crises like Flint’s, Alonso points out that advocacy has been going on for decades. Concern for the environments of “the most vulnerable and marginalized” started in the National Council of Churches in the 1980s, she says.

“Our perspective was informed not only by the stories that we were hearing from the churches about air pollution and water pollution and toxic waste exposures, but it was also through an empirical study commissioned through the United Church of Christ in 1987 entitled ‘Toxic Wastes and Race.’ It was the country’s first study that empirically proved that the strongest demographic factor that correlated to living near a toxic waste site was race, regardless of rural or urban or economic status,” said Alonso.

Barnes adds that while the PC(USA) has been working on environmental justice since the 1980s, “we still have a long way to go.”

The work, while challenging, holds blessings, such as the blessing of seeing the strength in God’s children.

Rich Copley is a communications strategist in the Presbyterian Mission Agency.