Make A Donation Click Here >
Home › Woman of the cloth, woman of the belt

Finding the spiritual in the physical 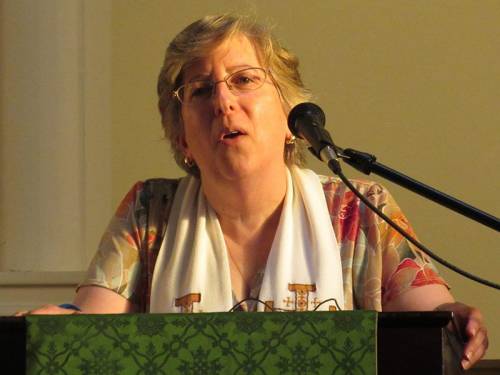 The Rev. Donna Elia was inspired by her son to try tae kwon do. Little did she know the impact it would have on her both physically and spiritually. Courtesy of Donna Elia

A doctor of ministry degree would be easier than this for me.

I told that to myself many times as I took three arduous 2½-hour tests, as well as a black belt practice test, all leading up to a final exam. This was over and above four years of rigorous classes, color belt tests and a binder full of requirements toward the rank of “1st dan,” the first-degree black belt in tae kwon do, a Korean martial art that emphasizes kicking techniques.

I say this not to diminish the considerable effort a doctor of ministry entails, but as recognition that I’m much more comfortable in an academic environment than in a gym filled with jumps, spins and kicks.

Thankfully, the tae kwon do requirements also included written essays and exams. It’s an understatement to say that these came more easily to me than the physical requirements that included 3,600 pushups, 3,600 situps and 30 miles of running.

I began my tae kwon do journey six years ago, at 51, long past the time when most people would have thought it reasonable to do so. I think of Sarah laughing at the promises of God, and I owe it to my son, Luke, who started a year ahead of me. He was only 6 at the time and he was OK with my being a student with him. I count that as a win.

There was an enticing Mother’s Day special. Who can turn down a free month and a free uniform? So, despite my inability to turn back the clock, I got out on the mat and found that I loved the physical rigor. It drew from me meditation on the strength and mercy of God. Little did I know how much I would need that strength and mercy — and endurance.

During my tae kwon do journey, the congregation I serve in Hoosick Falls, New York, along with rest of the residents there, faced a water crisis. It was a major event: A reference to it even made it on a national TV talk show — a big deal for a small town like Hoosick Falls.

The water we had been drinking was contaminated with perfluorooctanoic acid, a suspected carcinogen, caused by the manufacturing of plastics. Although I do not live in town and did not incur the same level of exposure that residents had, I was exposed through countless coffee hours, gatherings in homes and meals at the town’s diner. People I love had been put at risk. My tae kwon do physical/mental/spiritual practice added to my own resilience.

Each week, the Rev. Donna Elia trades in her clergy robe for a tae kwon do robe. On the mat, the pastor finds herself meditating on Scripture. Donna Frischknecht Jackson

It is critical to have reserves from which to draw when there is a crisis. Clergy self-care and well-being in body, mind and spirit become such reserves.

Tae kwon do has also represented a radical leave-taking from my image as clergy person. I never would have put “martial artist” and “clergyperson” in the same sentence. But as I ran laps for 15 minutes during a warm-up, Christian hymn lyrics, such as “And held in your keeping, my weakness is strong” from “Be Thou My Vision,” kept me going.

I also developed a practice that I dubbed “tae kwon do lectio divina.” Traditionally, lectio divina, Latin for “divine reading,” is a practice of scriptural reading that also involves meditation, contemplation and prayer and is intended to open up communication with God.

Having read the lectionary texts earlier in the week, I would meditate upon them not in stillness, but during the cardio portions of class. A phrase would turn over in my mind, as my body pushed onward, with synchronicity between stretching myself physically and extending myself mentally.

The result was amazing. I often found I had a new insight into the Scripture text for the week, or that my phrase became prayer. The passage in Luke’s Gospel, “By your endurance, you will gain your life,” comes to mind.

In an era when so many of us struggle to be physically fit and to control our weight, I think we need to find a physical discipline that works for us and incorporate it into our spiritual practice. Both testaments proclaim, “You shall love the Lord your God with all your heart, soul, mind and strength.” If that means the whole person, then some physical aspect to our spiritual practice is warranted. Tae kwon do engages my nephesh — my heart, soul and self. The conviction that “the Word became flesh” becomes real when we must be aware of our own bodies. Pushing my body to new levels of muscle memory has been keenly instructive to my spiritual formation. As my colleague the now retired Rev. Dr. Earl Johnson observed, “Perhaps the flesh becomes word, too.”

In addition, in class I found a sense of community, as respect is an important component of the curriculum. When we encourage one another with “you got this” or similar sentiments, I feel a profound sense of loving neighbor as self (and the prospect of board-breaking becomes more attainable). There are many ways to testify to what faith means to us as we interact with a multitude of others in peculiar environments.

I’m not an exception here. I did not grow up an athlete. I was and continue to be as unlikely a black belt as you can imagine. I don’t think tae kwon do is the answer for everyone. But all of us need to engage our whole selves in spiritual discipline — not as a means of self-denial, but to authentically and energetically engage in a life of faith. Now, on to second-degree black belt.