Make A Donation Click Here >
Home › ‘Prisoners are not slaves’

A Pulitzer Prize-winning journalist turned pastor works at educating the incarcerated, ensuring them a shot upon their release

LOUISVILLE — What keeps you hopeful?  That’s a question Presbyterian News Service posed to the Rev. Dr. Chris Hedges, Minister of Social Witness and Prison Ministry at Second Presbyterian Church in Elizabeth, New Jersey. Hedges has been teaching courses in a college degree program offered by Rutgers University in the New Jersey prison system since 2013.

As a reporter for nearly two decades, most of them with them with The New York Times, Hedges has spent much of his adult life in distressed environments, covering wars and terrorism in Central America, the Middle East and the former Yugoslavia.

“What keeps me hopeful is building real relationships with the oppressed, with people who suffer,” he said. “True spiritually, which the Rev. Dr. Martin Luther King Jr. wrote about, comes with resistance to radical evil, and that keep us alive morally and intellectually.”

Hedges tells the story of one of the imprisoned students he taught. Lawrence Bell was 14 when he was arrested for a crime he didn’t commit. Both of his parents were dead, and he was living on the streets of Camden, New Jersey. Barely literate and without legal representation, he was coerced into signing a confession. Sentenced as an adult, he’s not eligible to go before a parole board until he’s 70 years old. 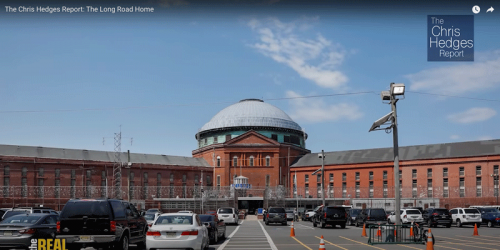 Thanks to the work of attorney Jennifer Sellitti, who is charge of training public defenders as part of the National Criminal Defense College faculty, Bell was released from prison after serving 30 years and one day.

Having become like family to Bell, Hedges had raised enough money to provide Bell with an address and other things he needed to tell the judge in order to gain his prison release.

“I never wear a clerical collar,” Hedges said, “maybe like four times in my life, but I put it on that day.”

To which Bell replied, “That’s my pastor.” 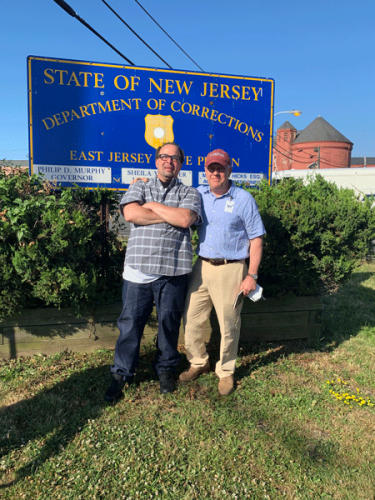 “It doesn’t change the world,” he said. “But it changes his world, and it changes my world.”

Hedges has just released a documentary called “The Long Road Home” (Part One and Part Two), which shows some of the hurdles his students face when getting out of prison and re-entering society. More than 75% of those who are released end up back in prison within five years.

“Everything conspires to push them back in,” Hedges said. “I wanted to make that clear through the stories of five of my students.”

He’s also written “Our Class: Trauma and Transformation in an American Prison.” Released last fall, the book chronicles the story of 28 students in a class he taught who wrote a play about their lives called “Caged.” The play was eventually performed in the Passage Theatre in Trenton, New Jersey, and sold out every night. 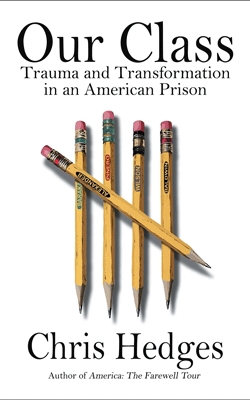 “The book and play really expose the trauma of poverty, police violence and mass incarceration,” Hedges said. “The prison system in the U.S. is the largest in the world. We have 25% of the world’s prison population, where less than 5% of the world’s population exists.”

According to Hedges, mass incarceration in the United States is a multibillion dollar a year industry. If you lock a body in a cage, he said, it can generate up to $60,000 a year, which sustains the prison industrial complex. In states such as Georgia, prisoners work 40 hours a week for no pay. In New Jersey, those behind bars make $27 a month with no Social Security.

In talking with incarcerated people around the country, Hedges said there have been a series of strikes — including a 10-day strike in Alabama  — in an attempt by prisoners to be paid minimum wage for their work. Prisoners understand this is the Achilles heel of the system, Hedges said.

“If they were paid minimum wage for their work, the prison system would not be financially viable,” Hedges said. “That’s why I believe we need to get fully behind this movement to speak out publicly that prisoners are not slaves and deserve to be paid adequately for their work.”

“It’s a mechanism by which we can hopefully begin to reduce the staggering number of largely poor and disproportionately people of color who are locked in cages.”

Hedges added that 40% of the people in the nation’s prison system have never been charged with physically harming another person.  While he’s taught students who have committed violent crimes — including murder —many in prison have never committed a violent crime. “It’s weapons possession and drugs,” he said.