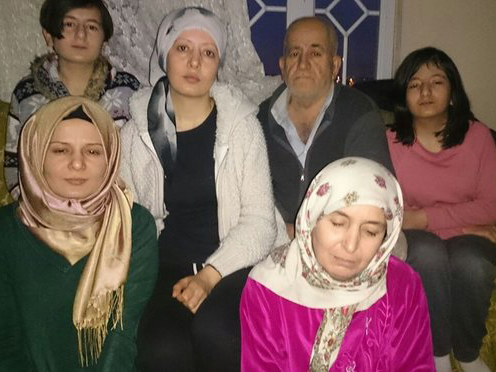 The Khoja family was not allowed on their flight to the US after President Trump’s travel ban was issued. (Photo provided)

LOUISVILLE – The Presbytery of New York City, in solidarity with Rutgers Presbyterian Church and its partners assisting in the resettlement of Syrian refugees, approved a resolution yesterday “protest[ing] the deeply flawed, un-American and immoral Executive Order aimed against refugees of the Muslim faith.”

The resolution was submitted to the presbytery for consideration by retired teaching elder, the Rev. Laura Jervis, parish associate at Rutgers Presbyterian Church. The presbytery approved the resolution that condemns the ban, saying it “contradicts the very foundations of our biblical faith to welcome the stranger and give safe haven to the refugee.”

Rutgers Presbyterian experienced the impact of the president’s executive order this past weekend when their second sponsored refugee family, the Syrian-Kurdish Khoja family, was denied entry on their flight from Istanbul to the U.S. Church members had expected to receive them Monday afternoon and to begin assisting in their resettlement.

In May of 2016, Rutgers helped resettle its first refugee group, the Abdulhamid family, who are also Syrian. A coalition of churches and synagogues raised the funds, $40,000 coming from Rutgers, and worked through Church World Service, which has issued its own condemnation of the executive order, to bring the heavily vetted family to the U.S.

“We did not expect these difficulties to be so immediate or so severe,” the Rev. Andrew Stehlik, pastor of Rutgers Presbyterian Church, told The Guardian about his surprise over the sudden issuance of the executive order. Anybody who wanted to give the Trump administration the benefit of the doubt had now been proved wrong, he said. “Now we know, it is just absolutely catastrophic.”

“I urge the president and his administration to reverse this very harmful decision regarding refugees,” he said. “Presbyterians are not afraid of this so-called terror threat. We are not afraid because we profess a faith in Jesus, who entered the world a refugee.”

A NPR report issued last Friday found that since September 11, 2001, no Muslim extremist from the excluded countries—including Syria—has executed an attack on American soil. Those attacks came at the hands of extremists from Saudi Arabia, Egypt, Lebanon, United Arab Emirates, Russia and Pakistan, none of which are included in the travel or immigration ban.

The January 31, 2017 resolution of the Presbytery of New York City is printed below.

Whereas, the President of the United States, by Executive Order on January 27th, 2017,  has banned persons from  Syria, Iraq, Iran, Libya, Somalia, Sudan, and Yemen (in essence banning the majority of Muslim refugees) from entering the United States, and

Whereas, this ban contradicts the very foundations of our biblical faith to welcome the stranger and give safe haven to the refugee,

Be it resolved,  the Presbytery of New York City, meeting in plenary session on this 31st day of January 2017 decries any policy that discriminates against refugees by nationality, color or religion,

And further, supports Rutgers Presbyterian Church and their ecumenical and interfaith partners in their work and ministry with Syrian refugees and protests the deeply flawed, un-American and immoral Executive Order aimed against refugees of the Muslim faith.

And further, urges the President to rescind this Executive Order and restore the integrity and values of compassion and hospitality essential to our identity as a nation.