Presbyterian Disaster Assistance has maintained communication with churches and synods 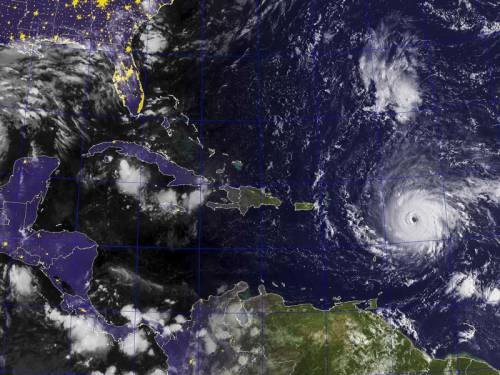 A satellite image shows the eye of Hurricane Irma, now a Category 5 storm, in the Atlantic Ocean, Sept. 5, 2017. Some fluctuations in intensity are likely during the next day or two as the hurricane moves into the Caribbean and may turn toward Puerto Rico and Florida. (U.S. Navy photo)

SAN ANTONIO – While Hurricane Harvey was still on the ground in Texas, Presbyterian Disaster Assistance was preparing for the next big storm, Hurricane Irma. PDA has been busy with back-to-back catastrophic storms in the past two weeks.

On Wednesday, the Category 5 Irma, packing winds of 185 mph, tore through the northern Lesser Antilles and Virgin Islands, as well as Puerto Rico. PDA has been in constant communication with communities in its path.

“While the water was rising in Houston we were tracking Irma and its likely trajectory and size,” said the Rev. Dr. Laurie Kraus, PDA director. “We were in touch with the church leadership of Puerto Rico as Irma was closing in. We also have a National Response Team (NRT) member who is in Puerto Rico. She is a social worker and part of our spiritual care team.”

Kraus says PDA has strong relationships in Haiti and the Dominican Republic, also in Irma’s path, where relief work has been underway for some time for previous storms. “Our standard practice on international hits is to confer with our international staff, area coordinator and anyone in World Mission who might have awareness or need to be alerted.”

Jim Kirk, PDA’s associate for national disaster response, says PDA has reached out and offered support in the Synod of Puerto Rico and is already looking at an initial emergency grant request.

The exact path Irma will take through Florida is still to be determined, and Kirk says preparation has been key in the state.

“Florida is ground central for so many hurricanes and we have an organization called FLAPDAN (Florida Presbyterian Disaster Assistance Network),” Kirk said. “Its director has been very active in preparing the six Florida presbyteries as well as the Synod of South Atlantic.”

As with all disasters, Kirk says PDA is ready to respond as needed.

“We will certainly be engaged with boots on the ground in Puerto Rico as well as Florida should we be requested,” he said. “Long-term recovery committees are up and running in Florida because of Hurricane Matthew. “PDA has already offered financial support for those long-term recovery organizations and is partnering with host sites in North and South Carolina while looking to identify host sites in Florida.”

“There were periods of time without catastrophic storms in Florida and people began to question whether FLAPDAN should continue,” Kraus said. “Some have even questioned the need to invest the time in preparation, but when disaster hits, and it always does, the prep work is invaluable.”

Kirk says PDA support for those impacted by Irma will not affect the ministry’s commitment to other working disasters.

“In addition to the recent hurricanes, there are seven to eight fires in Oregon, Washington, California, Montana, as well as refugee deportation issues around the country,” said Kirk. “We are still very engaged in Matthew response in Florida, North Carolina and South Carolina. There is relief work taking place in Georgia following tornadoes there as well as refugee deportation in New Hampshire.”

“It doesn’t always happen that you get two large catastrophic storms back to back. The closest we’ve come to that would have been in the 2004-05 season where Florida alone had eight hurricanes make landfall in the state, while the Gulf Coast got hit with Katrina and Rita,” said Kraus. “In addition to staff, we have 120 NRT members who work with ecumenical and interfaith partners in the U.S. On the international front, we work with Church World Service and ACT Alliance. We are used to working several disasters simultaneously because that’s how life is.”

To support recovery efforts in the wake of Hurricane Irma, designate gifts to DR000194-Atlantic Regional Hurricanes-Irma. Click here to give online.