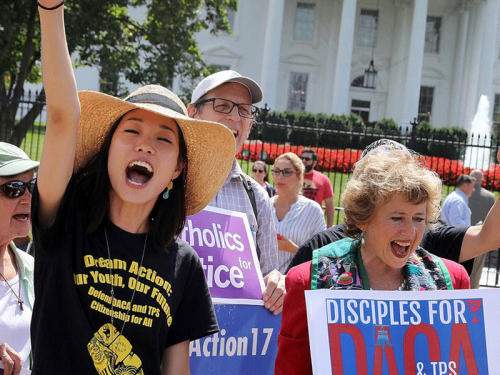 LEXINGTON, Kentucky — The Presbyterian Church (U.S.A.) Office of Public Witness is asking people to contact their senators on behalf of millions of people living in the United States without immigration status.

The Capitol Hill office (OPW) is calling for support of two bills before the Senate — the American Dream and Promise Act and the Farm Workforce Modernization Act — which, among other things, provides a pathway to citizenship for people living under Temporary Protected Status (TPS), Dreamers and Deferred Action for Childhood Arrivals (DACA) recipients, and essential workers.

This Action Alert provides tools for people to directly contact their senators, including text for a message.

“The Presbyterian Church (U.S.A.) has advocated for a pathway to citizenship for many years,” the Action Alert from OPW reads. “At the General Assembly in 2012, the assembly passed ‘On Advocating for Comprehensive Immigration Reform,’ which urged church members along with other community members to advocate for immigration reform that included ‘making family unity a priority’ and ‘providing a reasonable and inclusive path for undocumented migrants presently living in the United States to eventually gain citizenship without imposing punitive costs, wait times, or other irksome conditions.’ We must act now and urge the Senate to include a pathway to citizenship in the budget reconciliation.”

A recent federal court ruling in Texas illustrates the need for congressional action, OPW says. In June, U.S. District Judge Andrew Hanen ruled that DACA is illegal, and blocked the administration of President Joe Biden from accepting new applicants. It does allow people currently covered by the program to keep their status and apply for renewals while the case works its way through the courts. Biden has vowed to appeal the decision.

In January, Biden proposed the U.S. Citizenship Act of 2021 which would have addressed 11 million people living in the U.S. without immigration status, but the bill has thus far failed to gain traction. The proposals in the bills before the Senate would address around 5 million people needing the security and benefits of citizenship.

“Reach out to your senator, encouraging them to support an option that reflects a part of God’s justice,” the Alert says. “As people of faith, we will continue to seek a just pathway to citizenship for all 11 million undocumented persons; however, the opportunity for 5 million to gain access to citizenship is a significant step.”