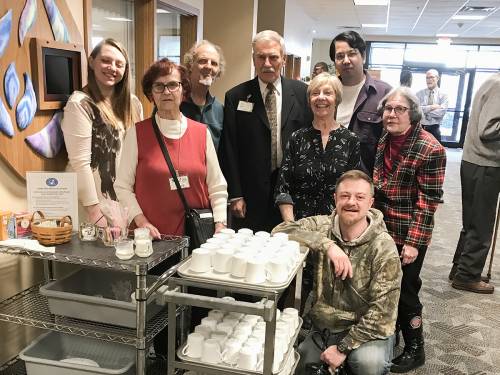 “Fair trade is important to Presbyterians and it is in line with our scripture, tradition and church policy — that the way we consume in this world reflect our values and not harm other people or God’s creation,” said Rebecca Barnes, coordinator of the Presbyterian Hunger Program where much of the church’s fair trade work is lodged.

Participation in fair trade is nothing new for Presbyterians. It is as much a part of the church’s mission as human rights, immigration and poverty alleviation. One of the ways the church participates in fair trade is through Equal Exchange, a for-profit, worker-owned cooperative based out of West Bridgewater, Massachusetts.

According to the Presbyterian Hunger Program (PHP), nearly 800 churches in the denomination purchased more than 71,000 pounds of coffee from Equal Exchange last year.

“This is something that people have to make a commitment to. They have to make a concerted effort to get their congregations to serve coffee during fellowship hour in place of commercial coffee,” Sklar said. “That’s the best thing they can do because people drink coffee every single week and why not concentrate on purchasing coffee that actually improves the lives of small farmers and helps take care of poor people?”

Sklar says a percentage of dollars spent on Equal Exchange products comes back to the Presbyterian Hunger Program as a donation to the Small Farmer Fund.

“Equal Exchange started fair trade in the U.S. 32 years ago as an alternative to the corporate food model,” said Sklar. “It focuses on treating the farmers fairly, paying the farmers a fair price for their products and assisting the people that grow our food who are also some of the poorest people in the world.”

The Presbyterian Church (U.S.A.) has been partnering with Equal Exchange since 2001.

“We practice what we preach at the Presbyterian Center,” said Jessica Maudlin, PHP’s associate for Sustainable Living and Earth Care Concerns. “Building Services purchases coffee and cups from Equal Exchange, putting the center in the top 5 percent of customers for the organization.”

A mother and child look at plants for sale as part of Mouvement Paysan de Papaye in Haiti. (Photo by Mark Hare)

Barnes says supporting fair trade goes a long way. “It not only does great things for farmers but gives twice because a percentage comes back to the Presbyterian Hunger Program as a donation to the Small Farmer Fund.”

Barnes says PHP was able to support two projects because of its partnership with Equal Exchange. One is the ECHO Asia Impact Center in Myanmar. Working with its partners, the center trains local leaders and farmers in seed banking best practices.

The second funded project is Mouvement Paysan de Papaye in Haiti, which addresses agricultural production decline and climate change in the region. The project supports 200 peasant farming families in gardening for market sale and food through the distribution of seeds for spinach, okra, eggplant and Moringa.

“These are two projects where people in their own country have uncovered root causes of hunger and are working in inspiring, effective ways to alleviate poor conditions,” said Barnes. “We are grateful to be able to help support these amazing organizations that are making a huge impact in the health and well-being of their communities.”

Barnes says the project also includes an awareness campaign on the consequences of climate change on agricultural production and the precautions that should be taken to reduce losses.

Despite progress being made with U.S. churches, Sklar says Equal Exchange faces some uphill battles. Online purchasing has cut into profits, the farm population is aging, and climate change is hurting farmers.

“For nearly 15 years, small farmers have been challenged by coffee rust, a fungus that is moving up the mountains where coffee is growing. Now that the weather is warmer, the fungus is moving up the mountain and it’s destroying coffee trees,” she said. “In some cases, farmers have lost 50-80 percent of their crops. Once cleared, it will take four years for the crops to return as mature coffee beans.”

The Presbyterian Hunger Program is made possible by donations to One Great Hour of Sharing.