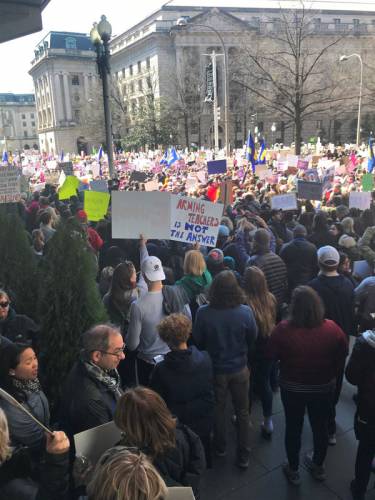 Thousands participate in the March for Our Lives rally in Washington, D.C., on Saturday. Photo by Nora Leccese

LOUISVILLE – Across the country and the world Saturday, hundreds of thousands of people took part in rallies and demonstrations against gun violence. The March for Our Lives was organized by students in various communities.

The main event was in Washington, D.C., led by students from Marjory Stoneman Douglas High School in Parkland, Florida, where 17 students and staff were gunned down on Feb. 14. The crowd demanded that Congress enact stricter gun-control legislation to crack down on school shootings. As of Saturday, there have been 17 school shootings in the U.S. since the first of the year where someone was either hurt or killed, according to national law enforcement officials.

The Office of Public Witness participated in the D.C. march.

“It was fabulous and I think it was a watershed moment for building a movement on gun and community violence. I was impressed with how many young women of color participated and the powerful messages they brought,” said Nora Leccese, OPW’s associate for domestic poverty and environmental issues. “We were impressed that most of the speakers at the event were under the age of 18 and we believe that students will play a key role in making the changes that we need in this country.”

OPW coordinated a gathering of Presbyterian demonstrators on Saturday morning at New York Avenue Presbyterian Church. The group marched together from the church to the noon rally on Pennsylvania Avenue. 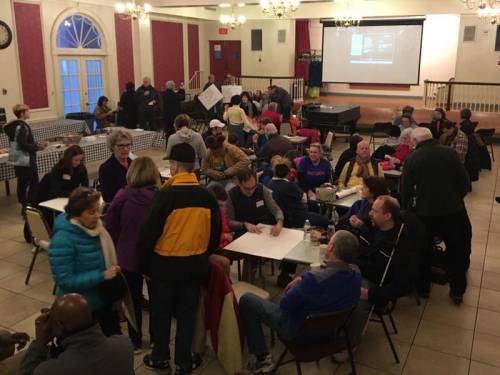 Presbyterians gather at New York Avenue Presbyterian Church in Washington, D.C., prior to the March for Our Lives rally on Saturday. Photo by Nora Leccese

“We had between 300 to 400 people gather at the church prior to the march, coming from other states and communities. New York Avenue provided a great service to the community by opening its doors and hosting the people for rest and meeting space,” said Leccese. “It was very multigenerational, from tiny babies to older folks. We helped provide a wheelchair for an 88-year-old who was determined to march with us.”

Even though it was a solemn subject, Leccese says she felt a lot of energy, high spirits and determination at the march.

Organizers estimate that as many as 800 protests were planned across the U.S., including marches in New York City, Boston, Los Angeles and Dallas.

Rob Trawick, the former moderator of Hudson River Presbytery and a professor of ethics at St. Thomas Aquinas College in New York, participated in the Rockland County, New York, march with other Presbyterians. He said the attendance was significantly higher than expected. Organizers were planning for a few hundred and more than a thousand showed up. 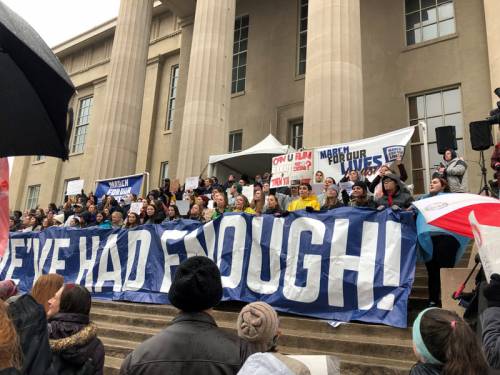 Communities around the country participate in local marches, like this one in Louisville, Kentucky. Photo by Lauren Rogers

“The student speakers brought a lot of passion to the event and certainly seemed to have a directed energy,” he said. “They knew what they were standing for and I didn’t get the sense that they were being used by some larger group. This was grassroots and the concern that bubbled up came from students who were concerned for their safety.”

Trawick is the father of a teenage son and he takes school violence personally.

“This issue is important to me individually and theologically,” he said. “The idea that we would put some sort of private interest above the communal good strikes me as decidedly unreformed and I’m angry that I have to worry about whether my child comes home from school.”

Events were also scheduled in other parts of the world, including Liverpool, England, and hundreds of other cities. 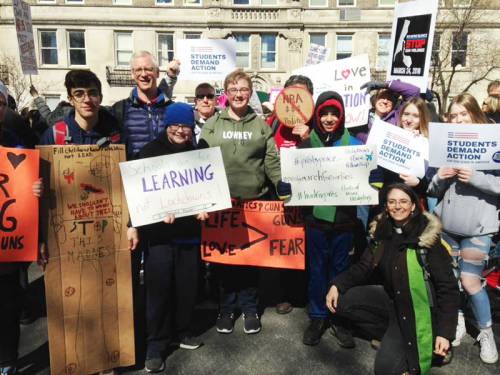 Despite the large numbers and success of the weekend marches, Leccese says they will continue to monitor the actions of both state and federal lawmakers with no plans to ease up on the pressure.

“There are some poorly thought-out pieces of gun policy coming out of Congress that the administration is lifting up as the ultimate solution,” she said. “We want to make clear that these bread crumbs offered in the budget are not the kind of gun legislation we’re looking for. We will keep pushing these legislators, or the legislators we replace them with, to actually take meaningful action.”