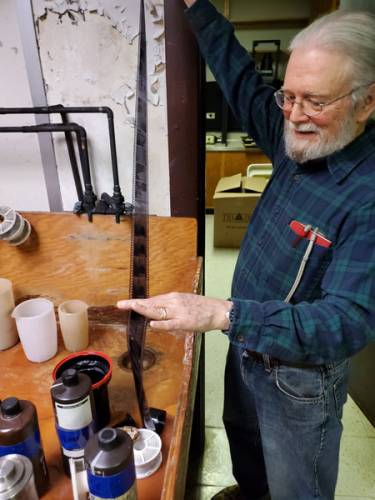 The Rev. Tom Davis, founder of the Interfaith Veterans’ Workgroup, develops black and white film in a Veteran Art Ops class at the community center in Wilmington, Delaware. (Photo by Leon Wilson)

LOUISVILLE — Since its establishment in 2015, the nonprofit Interfaith Veterans’ Workgroup,  based in Wilmington, Delaware, has provided a supportive interfaith community to assist returning veterans readjusting to civilian life.

“When people ask me what IVW is about, I say, ‘We welcome veterans home to use their warrior wisdom for peacemaking,” said the Rev. Tom Davis, a retired Presbyterian pastor and commissioned interfaith peacemaker who in 1970 was the senior military adviser to Coastal Group 34 in the Mekong Delta of Vietnam.

When Davis founded IVW using startup funds provided by New Castle Presbytery, Presbyterian Church of the Covenant in Wilmington and individual donors, 20 veterans a day were taking their own lives. The 20-per-day statistic is now 17, as the Department of Veterans Affairs calculation no longer includes active-duty servicemembers and members of the National Guard and Reserve.

IVW membership includes both civilians and veterans for a total of 63. Among its 31 veteran members, most served during the Vietnam War era or later. 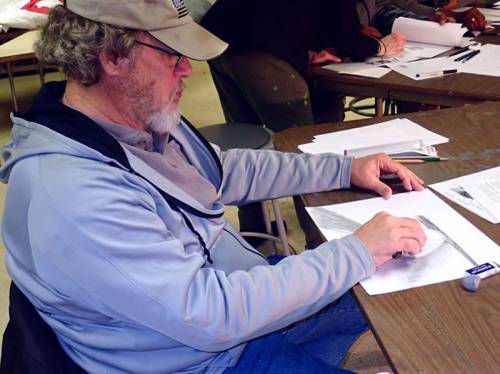 In an exercise of still-life pencil drawings, IVW students were encouraged not to look at the objects they were drawing, but to instead focus on the negative space around and between the objects. (Photo by Tom Davis)

Symptoms such as hypervigilance, shallow and incomplete breathing, inability to be fully present, sleep problems, digestive disorders, physiological damage from excessive self-medication and angry outbursts can be indicators of post-traumatic stress. Davis has noticed that some veterans and many people returning from incarceration face similar emotional and behavioral challenges, such as managing anger, maintaining close relationships and dealing with depression without self-medicating with substances that often lead to addiction.

“Frequent meditation is often cited as one of the most beneficial treatments for PTSD,” Davis said.

Davis explains that warriors experience post-traumatic stress because parts of their brains have been on high alert for extended periods of time. As a result, these brain areas have become programmed to respond automatically, instantaneously and aggressively to threats. In war this ramped-up condition of their nervous system protects them. However, when warriors return home, the same behaviors that protected them in war are seen by others as highly dysfunctional. Davis said researchers have learned that talk therapy isn’t very helpful in addressing issues of the unconscious brain. However, breathing meditation and other treatments are working well to help returning veterans.

Some veterans coping with post-traumatic stress also suffer from moral injury, a deep wound to the conscience due to something they did or failed to do in the line of duty that violated a deeply-held sense of right and wrong. Davis said many researchers believe that moral injury is a primary contributor to the deep depression that can lead to suicide. 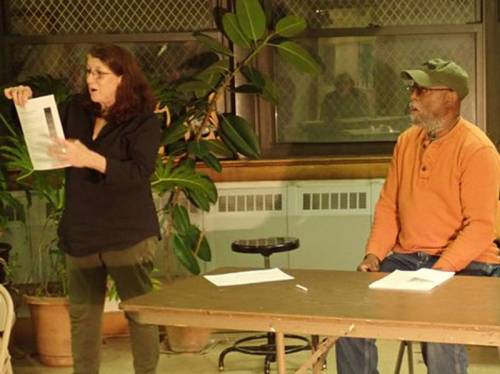 Veteran Art Ops teacher Jane Quartarone, at left, explained that the purpose of the class is to help students see more keenly. (Photo by Tom Davis)

A recent article in The New York Times titled “Why is America So Depressed?” points out that between 1999 and 2017 the age-adjusted suicide rate among all Americans increased by 33 percent.

“When we formed IVW in 2015, U.S. veterans were experiencing a much higher suicide rate than the rest of the population,” Davis said. “As I have studied suicide since then, I found that other groups have a high rate too: police, correctional officers, physicians and small farmers.”

As IVW members have taken part in activities and collaborative community improvement projects that contribute to better mental health, it has occurred to members of the group that the practical knowledge and skills that are working for them could help not just veterans, but the whole country. 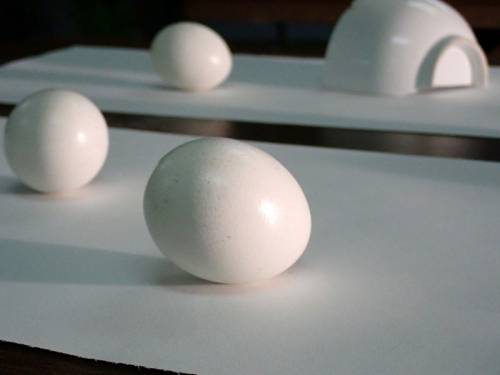 IVW art students are learning to see the highlights, reflected light, crest shadows and cast shadows. Although there were several objects on the table, all students chose to draw the eggs, thinking they were the easiest of the options. (Photo by Tom Davis)

“We are living in a time of crisis, but also a time of opportunity to learn about how to live sanely in a world that is becoming more and more stressful,” Davis said.

IVW is headquartered at the Presbyterian Church of the Covenant. Last year, on the eve of Veterans Day, an interfaith worship service focused on the theme of courage. The Sikh Center of Delaware prepared a spicy vegetarian luncheon and a panel of four veterans shared what courage has meant to them while on active duty and in the transition to civilian life.

“Very attentive listeners were deeply impressed and enlightened by this level of emotional sharing,” Davis said. “Tears were shed, evidence that participants felt safe to take off protective masks they have had to wear in other contexts.” The panelists included a U.S. Navy corpsman who served in a Marine battalion that had frequent contact with the North Vietnamese Army, a Vietnam veteran who is now a Muslim imam, a U.S. Army veteran who served in Iraq and suffers from post-traumatic stress and moral injury and finds comfort through writing poetry, and a female U.S. Air Force veteran who piloted C-130 airplanes and is currently a pastoral counselor in the Roman Catholic faith tradition. Listen to excerpts of the service.

The Veteran to Veteran Hospice Visitation Program is supported by two IVW members who have been trained to visit veteran hospice patients of Bayada Health Care. If dying veterans have issues weighing on their hearts and minds, they may find it easier to share these with a veteran, rather than a civilian. A third IVW member is in the process of becoming registered and trained to visit veteran hospice patients.

For more information on the Interfaith Veterans’ Workgroup, contact Davis at 302-507-6012 or tcd123@gmail.com.