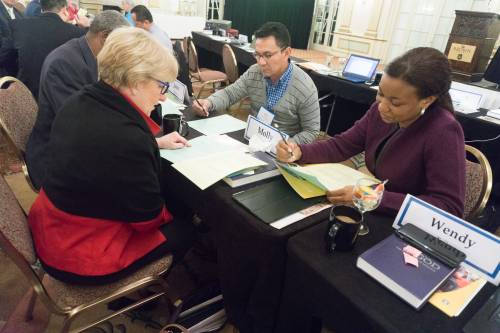 Presbyterian Mission Agency Board members during a ‘Generative Discussion’ exercise at the Fall 2016 meeting. (Photo by Gregg Brekke)

LOUISVILLE – The Presbyterian Mission Agency Board (PMAB) of the Presbyterian Church (U.S.A.) concluded its Fall 2016 meeting that featured a new structure and new members.

Interim executive director Tony De La Rosa spoke during the closing plenary session saying today was a year, to the day, since he had been offered his position at the Presbyterian Mission Agency (PMA.)

“It has indeed been quite a year,” he said. “The finance committee has indicated we are dealing with strong finances. We are ahead of revenue projections in unrestricted funds from congregations and presbyteries to the tune of nearly one million dollars.”

De La Rosa also announced the discovery of new and undesignated funds that will help to cover the nearly $500,000 cost of mandates approved by the 222nd General Assembly this past summer.

De La Rosa praised the election of the new board, pointing out its composition as the most diverse board of the six agencies of the PC(USA). He spoke to the departure of the Rev. Hunter Farrell from his position as the director of World Mission at the PC(USA), saying he had brought tremendous integrity to the efforts to evangelize, teach and empower people around the world. “All of us owe Hunter Farrell an immense debt and we wish him Godspeed in his next call.”

De La Rosa announced the board is considering meeting in the Presbytery of San Juan, Puerto Rico, hoping the board will be able to visit local churches and ministries to enhance their work and deliberations.

“We will love to have the PMA visit us,” said Raul Felipe Santiago-Rivera, who ministers in the Presbytery of San Juan. “[To] see what we are doing with 1001 New Worshiping Communities, how we have worked on the mission the missionaries brought, who arrived nearly 125 years ago.”

Sinthia Hernandez-Diaz reported no recommendations or actions were received by the Audit Committee. The committee heard a report and received the audit plan from Alice Cowley, manager, and Kristin McDonner, senior manager, Crowe Horwath LLP, external auditors. Hernandez-Diaz was elected as vice chair.

David Shinn gave a report on the initial work of the Mission Impact Committee. No consent or action items were and Shinn praised the diligence of other committee members.

One committee member describes its work as “keeping our finger on the pulse of ministry as it aligns with the church’s mission.” During its nearly four-hour meeting on Thursday, the committee received an overview of four collective goal areas: Communications, Evangelism, World Mission and Young Adult Volunteers.

“Our ministries align with mission statements and this group is about trying to get ahold and evaluate whether we are hitting our goals and determine if they are aligned with what we are doing on the ground,” said Gregory Chan. “That’s the test of whether we are succeeding in our ministries.”

PMA ministry leaders gave an overview of each of their areas of work as well as a summary of how leadership measures goals and success.

Four consent items were approved by the full board as recommendations of the Executive Committee as reported by PMAB president Ken Godshall. The first two actions pertained to the location and dates of upcoming PMAB meetings through 2020, including three of the seven locations not being Louisville. A suggestion from the floor requested the group to meet at Stony Point or one of the next two locations of the PC(USA) General Assembly: St. Louis or Baltimore.

Action items approved by the full board included the authorization of the committee on Mission Responsibility Through Investment (MRTI) to co-file a shareholder resolution on drug pricing in 2017 with a company in the pharmaceutical industry, setting special days and programmatic emphasis for 2018, and actions pertaining to the transfer of Ghost Ranch to the National Ghost Ranch Foundation.

The Corporate Report of the PMAB, acting on behalf of the Presbyterian Church (U.S.A.), A Corporation, included consent agenda items recommending the approval of the corporate minutes from its April 2016 meeting, recommending the election of officers to the board of directors, set the allowance for Teaching Elders on the exempt staff of the PC(USA), and authorized signatories for the Presbyterian Representative to the United Nations bank account.

It also approved recipients of the first-cycle 2016 DREAM Grants. These applicants were selected and recommended by the DREAM Team members at their July 12, 2016, meeting.

“This makes me proud to be a Presbyterian” said Nancy Ramsay, a member of the Personnel and Nominating Committee of the PMAB. The statement followed the information the committee received concerning changes to PMA employees’ benefits tied to exempt and non-exempt classification. The changes include an increase vacation time off, based on years of service for non-exempt employees, effective January 1, 2017. It also included keeping existing benefits for employees who are currently exempt but who move to non-exempt status as a result of the Fair Labor Standards Acts change. The committee met on September 15 during the PMA Board of Directors meeting to discuss matters impacting the 251 PMA staff members and board nominations.

An additional information item included the election of Mark Brainerd as Vice Chair of the committee.