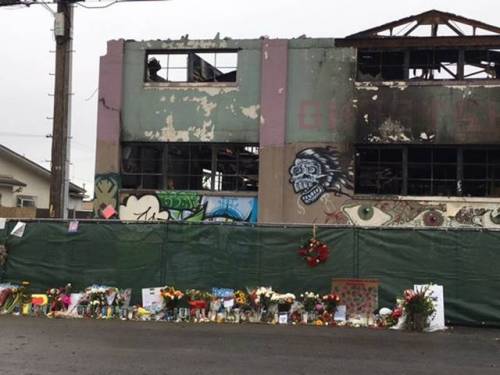 The remains of the Ghost Ship, heavily damaged by fire in Oakland, California in early December. (Photo by Suzanne Malloy)

LOUISVILLE – It’s been over a month since fire broke out in an Oakland, California warehouse, known as Ghost Ship, killing 36 people. Just before Christmas, members of Presbyterian Disaster Assistance’s National Response Team, were invited to visit the community and meet with faith leaders. The team not only witnessed the grief, but also the efforts by community leaders to stop the evictions of other residents in the area.

“There were so many flowers, cards and candles. People were still coming by and it was clear the Ghost Ship community was well loved,” said Suzanne Malloy, NRT lead. “We looked at the burned building and saw pictures of how vibrant it was as a living space before the fire. I experienced deep sadness because not only did people lose their lives, but also their living space was taken and a lot of the artwork and creativity had gone up in smoke.”

Ghost Ship had been converted from a warehouse into an artist collective, including housing units. At the time of the fire, the building was hosting a concert promoted by the house music record label “100% Silk.” Under the building’s permit, no residential or entertainment venues were allowed.

Since the fire, Oakland authorities have increased their review of alternative housing for the artisan community, forcing more people, who are barely making ends meet, to seek new shelter in an expensive city.

“The Ghost Ship fire has brought a lot of attention to an issue we’ve been fighting since the market started to turn in 2012,” said the Rev. Debra Avery, pastor of the First Presbyterian Church of Oakland. “This is an art community, many of those who live here don’t win big grants to produce their art. It’s their gift and calling, but finding the means to live are not there.”

When the economy and building industry slowed down, it left a lot of empty buildings, said Avery. Warehouses like Ghost Ship, provided these artisans a place to live within their means. 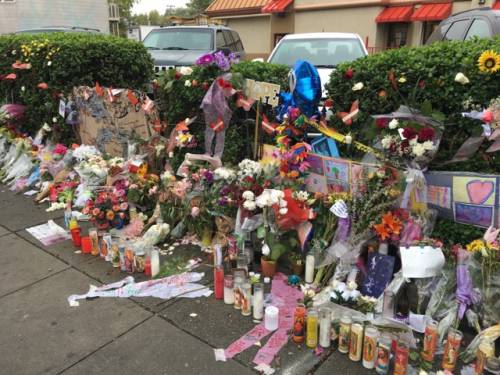 Days after the fire, flowers and other items were placed near the damaged warehouse. (Photo by Suzanne Malloy)

“These are the folks trying to figure out creative housing so they’ve been looking at living in warehouses or piling into two-bedroom houses,” said Avery. “The arts community is one of the most dramatically impacted including Oakland, San Francisco and Berkeley, because housing costs are so high. It’s really difficult for a working class family to make it without having more than one family living with them.”

“Even though they hadn’t talked with each other as a group, they all found a common theme and the fire is more than just bringing consolation to family and friends,” said Malloy. “There’s a larger social issue of gentrification. That word kept popping up and apparently so many of the lower income housing residents are being evicted and replaced with higher paying tenants and its changing the whole social structure of downtown Oakland.”

Malloy says there’s a movement to find alternative housing for those who lost their homes at Ghost Ship. She adds there is hope of developing an advocacy role within the artisan community to find solutions to the problem.

“Many LGBTQ residents are trying to find safe places to meet and seek council,” said Malloy. “That’s part of what the clergy group will be doing, having more conversations with the social support groups that specifically work with gender identification issues.”

Steve DeCaprio is the founder of Land Action, a housing advocacy group. A musician, DeCaprio found himself gravitating to Oakland after becoming homeless in 2000. Like many others, he says he began occupying abandoned property and soon became interested in finding ways to help those like him to find accessible places to live.

“Our community has largely been invisible for as long as I remember. Most people think of homelessness as people living on the street, in tent cities and dire circumstances,” he said. “Right after the fire, sweeps started occurring where people were losing their housing. There’s a need to mobilize politically because the city council won’t address the issue or is not concerned about the well-being of those who lose their homes.”

Avery says there’s been a lot of grief following the fire, but those directly impacted have been too busy trying to figure out how to avoid being evicted from current housing.

“Most of the folks in this community are not religious or Christian. The history of Christian behavior toward alternative populations is not good and many of those killed were transgender,” she said. “When I go out to organize or march, I wear my collar. I want the community to know that Christians do show up for justice matters and that we do love and care for brothers and sisters who are not part of the mainstream population.”

Malloy says the next step for PDA is to remain in contact with the presbytery and pastors in the area, providing guidance as they seek it.

“We facilitated their exploration of next steps and have encouraged them to attain some of the funding raised locally to develop their own programs,” she said. “We have offered and explained our resources such as compassion fatigue training as well as resilience and renewal, but this is so far ranging as far as social justice issues are concerned, that over time, they will need more denominational and local support. The stronger they develop as a clergy group and the more connected they are with local resources, the clearer their paths will be.”