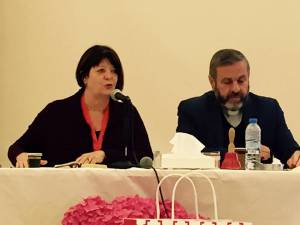 The Rev Dr. Laurie Kraus participates in discussions about the civil war in Syria with the Rev. Fadi Dagher, of the Evangelical Synod of Lebanon and Syria. —Presbyterian Disaster Assistance

Since the Syrian Civil War began in March 2011, Presbyterian Disaster Assistance has been responding to the needs of affected communities in Syria and Lebanon. Working in conjunction with ACT Alliance (Action by Churches Together), members and ecumenical partners have been providing relief to refugees in neighboring countries and to internally displaced Syrians.

For much of the ongoing disaster response PDA is working in direct partnership with our Presbyterian partners in the region, the National Evangelical Synod of Syria and Lebanon (NESSL),which has embraced into its mission efforts relief, rebuilding and pastoral care for those affected by the war. PDA Coordinator, the Rev. Dr. Laurie Kraus recently returned to Lebanon and Syria for a consultation with NESSL partners.

“We spent several days at a retreat center outside of Beirut discussing the impact of the war in the region, the humanitarian needs and the church’s understanding of what its function is as a community of faith,” said Kraus. “The group shared the impact of pastoral work during war time, especially the Syrian pastors. They were asking us how our work has changed by being engaged with them. It was a rich three days of conversation, as we heard powerful and painful stories of life in besieged cities, and with congregations that have been scattered and shattered by violence and the threats surrounding them. In addition to sharing their own experiences as an affected community, we were moved by the invitation to share our own perspectives as partners of how our work and faith practice have changed by being engaged with them.”

On the fourth day of the Lebanon visit attendees split into groups and visited refugee schools. There are currently four NESSL operated schools in Lebanon with plans for a fifth one in the southern portion of the country. One school had just opened in the town of Minyara and already had 72 children attending.

“The school was actually an old warehouse and they would bring the children in by bus from the camps,” said Kraus. “This school focuses on children that are completely illiterate having been deprived of schooling in Syria by having to flee as refugees. Almost all of the children are at entry level education, ages four to 13. So they’re reaching kids whose lives were disrupted when they had to move to Lebanon five years ago.”

Kraus says the United Nations runs some schools in the larger camps, but she credits NESSL with running some of the best schools in the country adding they are very sound educationally.

“These schools will likely cost $6,000 to 8,000 dollars a month. This is a huge financial undertaking with four schools in operation and plans for a fifth,” said Kraus. “Even if the war ended tomorrow, they will stay committed to this educational project for years while they work to get these folks into stable and settled lives, whether in Lebanon or back home.”

While the crisis in Syria has no end in sight, Kraus says church and ecumenical partners are planning to be there for the long haul.

“After the crisis is over and people are back in their homes, it’s natural for the humanitarian effort to taper off after an emergency phase,” said Kraus. “But there are long term commitments to these educational projects, to rebuild shattered communities, and to restore the livelihoods of families and individuals disrupted and destroyed by war. This speaks in volumes about the commitment, courage and great-heartedness of these partners that are willing to embrace such challenging projects and they’re doing it with such transparency and hope.”

To support humanitarian response in the Middle East, give to account number DR000081. For more information, click here.

Presbyterian Disaster Assistance is supported by your gifts to One Great Hour of Sharing.