#GivingTuesday – Join the PC(USA) in responding to a world in need! Give now!
Make A Donation Click Here >
Home › Presbyterian congregation in Washington state is lovingly served by a couple formerly drug addicted and without a home

LOUISVILLE — Sometimes, Kevin Riley says, he can look in the mirror and see “one who is truly beloved.”

Riley, a commissioned pastor at one of the Presbyterian Church (U.S.A.)’s Matthew 25 churches, Mt. Baker Presbyterian Church in Concrete, Washington, and his wife Danielle were the guests Thursday on the Being Matthew 25 livestream, which can be seen here or here. Joining the Rileys, who were formerly drug addicted and without a home, was the man who used to arrest them before eventually being baptized by them, Tom Wenzl.

After retiring from more than three decades in law enforcement, Wenzl worked for a few years in a drug release program where Kevin Riley “was one of my first customers.” Riley “was clean, and I’d never seen him like that. He’s an amazing man. He knew more about the work release program than I did, so I kind of put him in charge,” Wenzel told Being Matthew 25 hosts the Rev. Dr. Diane Moffett, president and executive director of the Presbyterian Mission Agency, and the Rev. DeEtte Decker, director of PMA Communications.

After Riley completed the work release program, “Kevin became my go-to guy,” Wenzl said. Wenzl would call Riley and ask how to handle sticky problems as they arose. 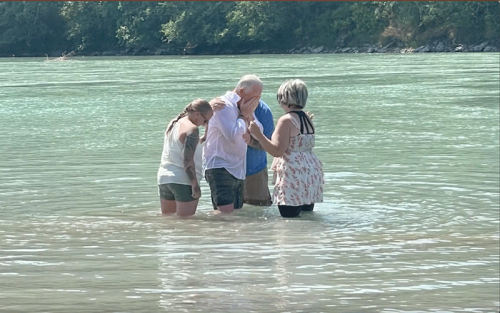 Tom Wenzl emerges from the waters of baptism after being baptized by Kevin Riley. (Photo contributed by Kevin and Danielle Riley)

That’s a far cry from the messages Riley had been hearing most of his life. “I had been told I would never amount to anything and my life wasn’t worth saving,” he said. “The truth is, I am a child of God and I have the opportunity to change people’s lives for the better.”

“People think [addicted and houseless people’s] circumstances are a choice, and having lived through that, we know it’s not something anybody would ever choose,” Danielle Riley told the hosts. “Jesus tells us to help the least of these.”

“A lot of times, churches will step back when they run into that trouble,” Moffett said, describing some churches’ hesitancy to house people in crisis the way that Mount Baker Presbyterian Church has. “This is a real transformation that has taken place, Kevin and Danielle, from the inside out.”

In 32 years of policing, “I am dealing with a lot of Kevins and Danielles in the world and I never see the transformation,” Wenzl said. “It really changed how I approached people coming in for recovery. … Sadly, we had people relapse in the middle of the program. Stepping back from the adversarial approach to becoming team members, we just continued that after [Kevin Riley] was done with the program. It was no longer boss and worker; it was Tom and Kevin — and of course God was involved in it too. Kevin and Danielle guided me down a path I didn’t know where it was going to lead.”

Using connections they’d made with county authorities, the Rileys were able to open an emergency cold weather shelter at the church to serve up to a half-dozen people each night in a community of 700 people. A woman who works at the shelter is a former hairdresser. “People are met with kindness, love, compassion and integrity,” Kevin Riley said. “They get a shower, and when she is working, she offers them a haircut so they can leave the next morning feeling like beloved children of God.”

“At Mount Baker, we believe the church is a hospital for the broken,” he said. “We come to find spiritual healing and we realize a lot of people are hurting in different ways. … We help people with reckless abandon and unapologetic love.”

“Kevin is an amazing community developer, connecting with people and making friendships,” Danielle Riley said. “He is good at loving people and meeting hem where they’re at.”

“As we seek to become a Matthew 25 denomination, you are helping us to make a difference in the world,” Moffett told her guests, thanking them on behalf of the denomination. “The work you do is important and it matters.”

“It’s not just, ‘I want to join your church,’” Johnson told Moffett and Decker, “but ‘I want to connect with what you’re doing.’”

“We are talking about faith formation, sharing the gospel in ways that transform people,” Moffett said.

A new Vital Congregations cohort is set to begin in the spring of 2023, Johnson said. Learn more here.