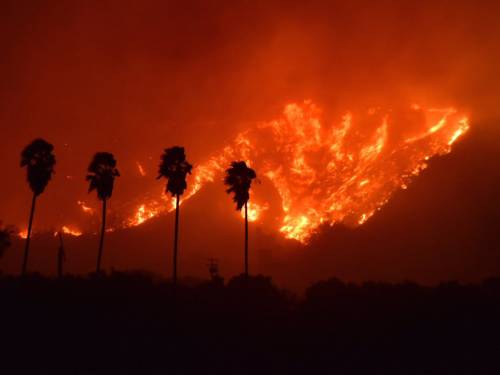 LOUISVILLE — Wildfires are raging again in parts of California leaving more than 45,000 acres burned, destroying homes and forcing major evacuations. Apartment complexes, homes and a hospital are among the structures in the path of the fast-moving flames.

“It’s obviously in the very early stages right now and there is little containment of the fire,” said Katie Wiebe, executive director of the Institute for Congregational Trauma and Growth, as well as a member of Presbyterian Disaster Assistance’s National Response Team. “We have at least two churches, possibly three, that are directly impacted, where they’ve had members evacuated.”

Emergency officials say at least 1,000 firefighters are on the scene battling the flames, made worse by strong winds. The fire is believed to have started around California State Highway 150 on Monday evening, spreading quickly to Santa Paula and Ventura within the Presbytery of Santa Barbara.

“Right now, we want to make sure that everyone is safe, including our pastors and members, people in the community,” said Wiebe. “The initial assessment of damage is still going on and churches and community partners are trying to reach out to members to make sure everyone is evacuated.”

Authorities say this is already the worst year on record for California wildfires. More than 40 people died and 10,000 structures were destroyed in Northern California’s wine country after wildfires broke out in October.

“People are definitely spread thin and fatigued,” said Wiebe. “But at the same time, there’s also a lot of real community spirit that is taking place along with collaboration.”

The strong Santa Ana winds are expected to continue at least until Thursday, hampering firefighters’ efforts to keep the flames from spreading.

“Other than reaching out to members, we are waiting to see what’s going to happen,” said Sandy Thoits, presbytery council moderator. “We ask for prayer for the people who have been evacuated from homes and that firefighters can get a handle on it and get it under control.”

PDA has reached out with an initial offer of support to Santa Barbara Presbytery,” said Jim Kirk, PDA’s associate for national disaster response. “This has been a very challenging wildfire season for California, the presbyteries and all of those impacted. Our thoughts and prayers are with them.”

Wiebe says the best thing Presbyterians can do to help now is to continue to give to PDA.

“Contributions to PDA are so helpful,” she said. “One of the first things these contributions do is create immediate grants that churches can use to help their local communities.”