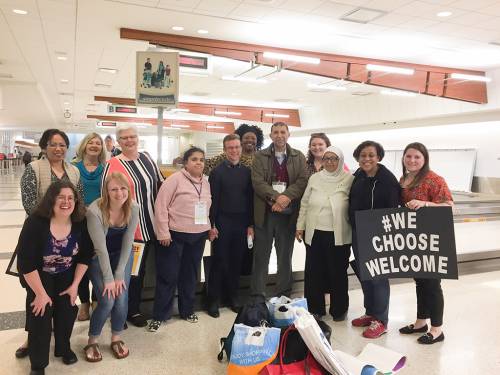 LOUISVILLE – Presbyterian churches across the U.S. will be placing special emphasis on refugees in the coming days. The United Nations recognizes June 20 as World Refugee Day, as a time to lift up the thousands of families who flee their homes and war-torn countries in search of a better life and remember the church’s commitment to provide refugees a safe haven.

The Presbyterian Church (U.S.A.) launched the theme “#WeChooseWelcome” in 2016, committing to welcoming refugees of all nationalities and faiths. The campaign is part of a larger effort involving other faith-based organizations and ecumenical groups including Church World Service (CWS).

“Here in the United States, congregations and local communities have used this special day as an opportunity to host celebrations such as international festivals,” said Susan Krehbiel, catalyst for refugees and asylum with Presbyterian Disaster Assistance. “It is also a time for us to remember refugees and displaced persons in our worship and think about ways that we can advocate on their behalf.”

Krehbiel says she hopes churches will use this time to lift up refugees in prayer and pray for the U.S. as well.

“This is a time where our country is struggling with what our relationship is with the world and refugees are an integral part of that,” she said. “I would hope that churches would take a moment to pray for refugees as well as for people in power that are making decisions about refugees’ lives.”

President Donald Trump’s efforts to put travel bans in place for refugees coming to the U.S. have sparked national and international debate, placing churches in the middle of those discussions.

“I think a lot of congregations have been inspired to do more and many have found their voice and conviction around their sense of call to refugee ministry,” said Krehbiel. “At the same time, there are some congregations that are nervous because this has been a part of their ministry for years and they feel caught in the middle.”

According to Krehbiel, more than 1,500 PC(USA) congregations reported some form of refugee support in the past year. In addition, congregations engaged in refugee ministry are found in 35 states and Washington, D.C. Approximately 2,000 congregations have asked for more information from PDA about how they can begin or extend their ministry with refugees.

PDA Director, the Rev. Dr. Laurie Kraus, has made numerous trips to some of the countries that have seen hundreds of thousands leave, including Syria and South Sudan. She’s visited refugee camps and traveled with Krehbiel to the U.S. southern borders to meet with families that have entered the country.

“We are re-weaving a new Presbyterian interfaith community of support for refugees and immigrants in a moment in our world’s history that is as important and necessary now as it was when faith groups came together to respond to the refugee crisis at the end of World War II,” she said. “The tension of this political climate around refugees is just heartbreaking, and being able to build on our long history of welcoming refugees feels deeply important.”

Kraus recently returned from her second trip to Homs, Syria, a city devastated by the war that is now in its sixth year. The city has been left in ruins, yet those who have stayed behind are struggling to rebuild, even in the midst of continuing threats of violence.

“To have seen what we have seen, to listen to the stories that our partners are hearing from the refugees and displaced people they are supporting, is profoundly important at this moment,” she said. “We’ve seen the sacrifices they’ve made, the cost of leaving everything and crossing rivers and mountains to communities and countries they don’t know and sadly find themselves viewed by some as a threat to the American way of life.”

Krehbiel says she’s inspired by refugees who continue to seek better lives through the most difficult circumstances.

Students from Louisville Presbyterian Theological Seminary joined together at an immigration rally with PC(USA) ‘We Choose Welcome’ signs to promote efforts to reach out to refugees and displaced persons seeking new homes in the U.S. (Photo by Mark Koenig)

“I tell people that my own patriotism has actually come from working with refugees because we often take the rights we have for granted and they remind me of that every single day,” Krehbiel said. “They know what it means to have a government that doesn’t respect them and who challenges them because of their faith or ethnic background.”

Krehbiel says most people can’t imagine the challenges refugees and asylum seekers face when they arrive in a new country, seeking a new home.

“When a refugee family gets to this country, it can be overwhelming. They’ve gotten on a plane or crossed a border not knowing what it was going to be like when they get here,” said Krehbiel. “I liken it to thinking about the Israelites when they left Egypt – just going out there, putting their trust in God and others. They don’t know what they will face, it is just a leap of faith. These families are really putting their lives in our hands.”

PDA has joined other PC(USA) ministry teams including the Presbyterian Office of Public Witness, the Presbyterian Peacemaking Program, Presbyterian Ministry at the United Nations and the Office of Immigration Issues to create new yard signs and advocacy materials as part of their continuing awareness campaign. Churches interested in these resources can go to pcusa.org/WeChooseWelcome/.

PDA will also be highlighting the church’s efforts to welcome refugees at Big Tent in St. Louis next month. A new documentary from David Barnhart, PDA associate for story ministry, will premiere following opening worship in College Hall. The screening is open to all attending Big Tent.

“It follows a refugee family through their first year in the U.S. through the lens of the family members themselves as well as through the congregation that is hosting them,” said Krehbiel. “I think the particular people involved are exemplary of why refugee resettlement is so important. It is a life rescuing and lifesaving program.”

PDA has produced a number of resources to assist churches and groups interested in getting involved in this ministry. Click here for more information.