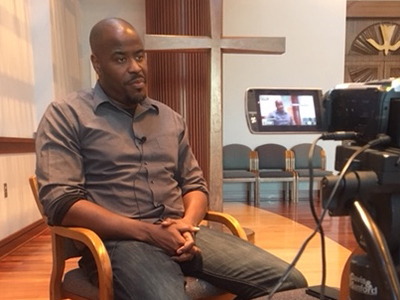 SDOP Coordinator Alonzo Johnson was recently interviewed about the ministry for an upcoming video segment on SDOP Sunday. (Photo by Rick Jones)

LOUISVILLE — Presbyterian churches across the denomination will turn their attention to people and communities in need this spring. April 8 is Self-Development of People (SDOP) Sunday, an opportunity for congregations to focus on the work to help disadvantaged people and low-income community groups.

“We are one of several ministries that benefit from the One Great Hour of Sharing. SDOP Sunday celebrates the work we do in engaging communities on the issues of poverty and oppression and the things that keep people from living lives of self-determination,” said the Rev. Alonzo Johnson, SDOP coordinator. “It’s a chance for churches to understand what we are about and what we do.”

The Presbyterian Committee on the Self-Development of People began as a ministry in 1970 and now provides support to more than 5,700 community projects in the U.S. and around the world. Working with its national committee, 39 presbytery and three synod committees, SDOP provides grants to communities struggling with social justice and economic issues. More than $100 million has been distributed since its inception.

Johnson says the ministry gets to the heart of what being a Presbyterian is all about and he encourages congregations to get involved.

Johnson adds that SDOP finds its purpose in the Scripture and the ministry of Jesus Christ.

“Jesus came to be with the poor and create relationships. SDOP is an extension of that ministry,” said Johnson. “It is really about recognizing that communities are vital and doing incredible work.”

Johnson has been serving as SDOP coordinator for approximately 18 months and credits the national and mid council committees for the work that has taken place. 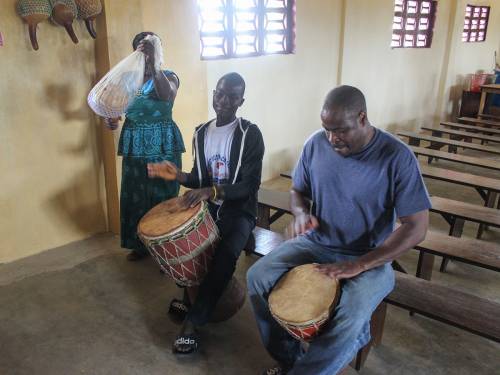 SDOP Coordinator Alonzo Johnson (right) plays drums with residents of a Liberian village during a two-week visit to Africa to assess the progress of the West Africa Initiative. (Photo by Rick Jones)

“It has been intriguing to watch SDOP as it fosters and creates relationships and walks with community partners in ways that are incredibly redemptive, in ways that are powerful and meaningful,” he said. “It’s also the stories where lives are put back together, where you see community power and community work, and capacity. The stories are of mutual care for one another, stories about interconnectedness and relationality and I think that these have been incredible for my short time.”

Johnson says he has had an opportunity to learn about the numerous projects that the ministry has supported over the years, adding there are two domestic projects that stand out to him. The first is the Exploring Educational Opportunities Black Male Leadership Initiative.

“This program addresses economically disadvantaged young people. Through lectures, workshops and field trips, they are able to create interest in education, academics, and engage young men in the idea of leadership roles,” said Johnson. “It’s a counter-narrative to what we see and hear about black young men, in particular, a counter-narrative to violence and the racial stereotypes that we see in the media.”

The second, according to Johnson, is the Women’s Empowerment Initiative out of Columbus, Ohio.

“The program is comprised mostly of Somali women who address the issue of economic disparity by making their own garments and clothes and sell their own cultural garments in the markets,” he said. “The money is used to boost the financial strength of community and influence the entrepreneurial spirit.”

Internationally, Johnson believes the West Africa Initiative (WAI) has been impactful. The project, a partnership of SDOP, the Presbyterian Hunger Program and Presbyterian Disaster Assistance, has been working with villages in both Sierra Leone and Liberia, addressing food insecurity and food cultivation.

“Through grants designed for economic development and training, we were able to partner and walk with villages to restore and rebuild lives,” Johnson said. “With the Ebola crisis, there was a large quarantine that prohibited people from buying and selling.  With provided resources, we were able to once again help bring stability, hope and economic strength back to communities.”

Johnson says people interested in getting involved with SDOP can participate in a number of ways including, giving to One Great Hour of Sharing, serving on the national or local SDOP committees, planning local workshops on the SDOP grant process or inviting SDOP-funded project speakers to speak at church.