Christmas Joy Offering – Supporting our leaders: past, present and future.
Make A Donation Click Here >
Home › Money matters at the A Corp board meeting 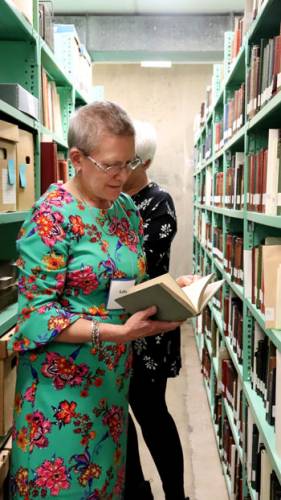 A Corp President Kathy Lueckert peruses a book at the Presbyterian Historical Society, host for the fall A Corp board meeting. (Photo by Fred Kristen Gaydos)

PHILADELPHIA — Questions and answers about finance dominated the conversation at this fall’s A Corp board meeting, held Thursday and Friday at the Presbyterian Historical Society.

Presentations by A Corp staff, board directors, and invited guests reviewed cost allocations for A Corp’s two largest clients, plans to increase revenues through continued investment income and additional service provision, and cross-Church conversations about streamlining the denomination’s complicated budget process in time for the June 2020 General Assembly.

A Corp manages the denomination’s corporate and business affairs. Its Administrative Services Group (ASG) provides non-mission support to church agencies and entities, including the Presbyterian Church (U.S.A.) mid councils. Presbyterians affiliated with A Corp’s client groups comprise its 11-member board.

Cost allocations for PMA and OGA

Denise Hampton, ASG’s controller, reported that A Corp’s cost allocation for services to its two biggest clients — the Presbyterian Mission Agency (PMA) and the Office of the General Assembly (OGA) — is set for an 80/20 split in 2020. Those allocations predict the amount of work A Corp will carry out for PMA and OGA in a given year.

Christopher Mason, A Corp board co-chair along with Bridget-Anne Hampden, observed that the cost allocations are “flexible and scalable for the future” and noted that overall allocations for both PMA and OGA are likely to grow over future budget cycles.

Other A Corp revenue

Board member Samuel Bonner summarized a concern shared by others in the room, saying, “We need to think of additional ways to collect revenue” inside and outside the A Corp structure.

Kathy Lueckert, A Corp President, reported that ASG is looking carefully at ways to increase the revenue side of its balance sheet to help “support the growth and sustainability of the ministries of our client partners.”

“We are asking clients what additional services they would like us to do for them,” Lueckert said. “We’ll get back to them with the costs involved, for instance for a software package, and see if they still want that service from us.” 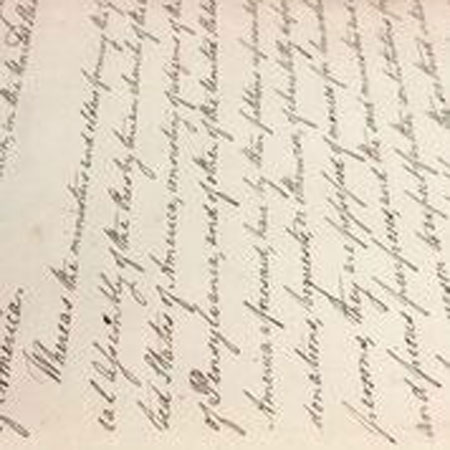 Among the documents the A Corp board saw during a tour of the Presbyterian Historical Society was the original handwritten record of the Church’s incorporation. (Photo by Kristen Gaydos)

On Thursday afternoon the Presbyterian Historical Society’s Acting Executive Director, Nancy J. Taylor, led the board on a tour of the society, including a viewing of the original handwritten record of the Church’s incorporation in 1799. The board then heard a presentation by Anita Clemons, Managing Director for Investments at the Presbyterian Foundation, with Paul Partington from Northern Trust Financial Investments calling in, about the Foundation’s management of A Corp’s investment portfolio.

Clemons discussed the portfolio’s performance in 2019, and how the Foundation weighs goals for wealth growth against “screens” for socially responsible investing. Later, in a closed session, guest speaker Eileen Lindner led the board through a session on “generative thinking.”

The possibility of a consolidated budgeting process for next summer’s General Assembly, first raised Thursday morning, was again discussed Thursday afternoon during a video conference between the board and Moving Forward Implementation Commission (MFIC) members Marco Grimaldo and Mathew Eardley.

MFIC, a General Assembly mandated commission, has proposed a cross-agency meeting to discuss the idea of a consolidated budget. In a recent email to PMA, OGA, A Corp and other denominational leaders, MFIC asked that representatives from those groups and their boards “honestly and openly examine budget realities and establish a unified approach and plan for budgeting that meets the needs of both OGA and PMA for the 2021-2022 budget cycle.” The proposed meeting will likely be held in December. 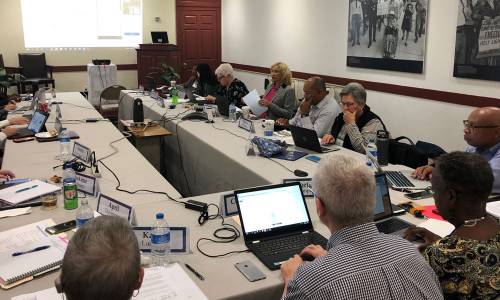 The A Corp board met Thursday and Friday at the Presbyterian Historical Society in Philadelphia. (Photo by Kristen Gaydos)

Hampden, the A Corp board’s co-chair, told the board that she was grateful for the help and cooperation of everyone involved in bringing together groups and potentially budgets. She specifically named the PMA board chair and vice chair, the Revs. Joe Morrow and Warren Lesane, and PMA Executive Director and President the Rev. Dr. Diane Moffett. “We’ve had productive conversations for our relationship building. We’re grateful for [their] cooperation,” Hampden said.

Mason noted that A Corp staff have been looking at the idea of a consolidated budget for some time. Those conversations, “and terrific talks like the ones we’ve had with Barbara Gaddis of COGA [the Committee on the Office of the General Assembly] show that a lot of things are happening together,” Mason said.

Lueckert spoke about MFIC the day before during her president’s report, regarding an ASG user survey that the commission had requested. Her report also discussed the General Assembly Nominating Committee and vacant A Corp director slots.

On Friday morning the board received committee reports and approved motions, including a revised employee handbook that brings A Corp, PMA and OGA staff into alignment; housing allowance requests; a new cyber security assessment; the development of an A Corp website; and a revised real estate policy that includes a call to keep Native lands in the possession of Native communities.

The next A Corp board meeting is scheduled for January 2020.