Participants say it’s time to ‘show up, show out and organize’ 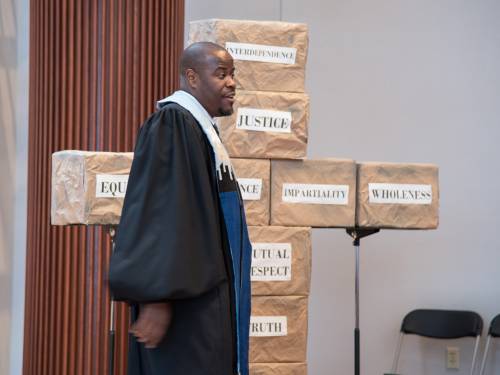 Alonzo Johnson preaches at the Presbyterian Center in Louisville during a celebration of the life and witness of Dr. Martin Luther King, Jr. (Photo by Gregg Brekke)

LOUISVILLE – More than a hundred people packed into the chapel at the Presbyterian Church (U.S.A.) offices in Louisville to celebrate the life and witness of Dr. Martin Luther King, Jr. The service commemorated the 50th anniversary of King’s speech “A Time to Break Silence” which drew connections between racism, materialism and militarism.

A small ensemble from Peace Presbyterian Choir stirred the congregation with powerful song, responsive readings and prayer brought to light the issues facing the world today including: contempt, false accusation, intolerance and abuse of power among others.

In his sermon, the Rev. Alonzo Johnson, coordinator of the Presbyterian Committee on the Self-Development of People, spoke from 2 Corinthians 5:14-20. He told the crowd we are “living in a world of deep division and injustice.”

“Our world lacks empathy and we see people who are beaten because they are different,” he said. “When there is no empathy, the world becomes a cold, distant place, a mean world to try and live in.”

Johnson said that the church needs to be reminded that regardless of who is in power, hate, strife and violence are still alive and well in the world.

“We judge people on race, gender, class and sexual orientation. We objectify people,” he said. “We must offer a ministry of reconciliation, living like we believe in Jesus.”

Johnson told the group that truth and reconciliation are connected to justice and that there is no peace without justice. He added that America cannot move forward until people deal with the truth of who they are.

“We are called to have a completely new outlook, so go, get up and do God’s work,” he concluded. “If we can’t recognize Christ in this hurting, desperate world, if we don’t notice the holes in people’s hands, we have no idea what reconciliation is.” 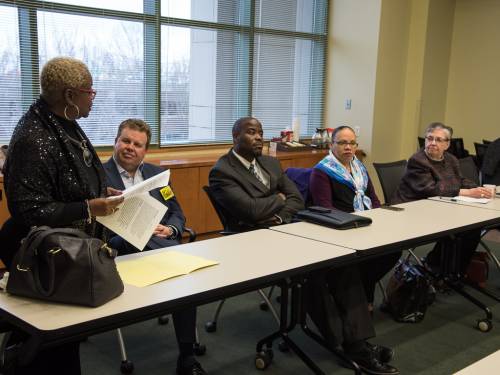 Dr. King has been described as a “drum major of peace and righteousness.” The panel was asked what the church can do to continue the beat.

“Worry about the best you can do for yourself, don’t worry if people like you,” said Parks. “It’s time to move from protest to progress. That means we can still protest over housing, discrimination and other issues, but we need to organize to find solutions to these problems.”

“Dr. King was very clear about the importance of education. We see growth in mass incarceration and immigration detention,” said Johnson. “But we need to create awareness, become educated about the issues. We need to know the notes and the beat. If we don’t get the notes right, it all falls apart. Education is the key.”

“We need to get to know each other, talk and listen about what life is like,” she said. “Relationships can open the door to authentic change and opportunity to do things differently. What has this nation wasted by not empowering everyone? We have wasted centuries of human capital.”

When asked how society can get beyond the surface of a person and explore the “content of character”, Parks said it all begins in the home.

“It begins with the core family values you are taught,” she said. “Children are so innocent, they aren’t prejudiced and don’t see differences. As parents, grandparents, pastors and educators, we have to do a better job of bringing back those family values.”

Johnson responded, saying family values only go so far in addressing issues of dominance or supremacy. Until these topics are confronted “we can’t talk about character,” he said.

“It’s not just a home issue, but a society issue. We need to analyze the ways we accept white supremacy,” he said. “We need to look at how this society talks about race. It’s hard to raise kids when schools have told black children they are disposable and not as important. Mass incarceration teaches them they are garbage. When we start attacking those systems, then we can talk about content of character.”

Parks said it is time to move from dialogue into action. “We need to organize around policy and push our political leaders to be accountable. We need to pull together as clergy, educators and activists.”

On the question of how Millennials can get involved, panel members suggest organizing around policy that generates passion and meaning.

“Whether its mass incarceration or affordable housing, get a group together or join an existing organization and invite politicians to work on those issues,” said Parks. “If’ you’re concerned about the next president of the United States; you need to start thinking about the next election now.”

Panel members agree that it will take a lot to impact race and racism. They say those concerned should “show up, show out and organize”.

“In the future, the churches that stand for something and are active and visible in the community, will be the ones to succeed,” said Sanders.