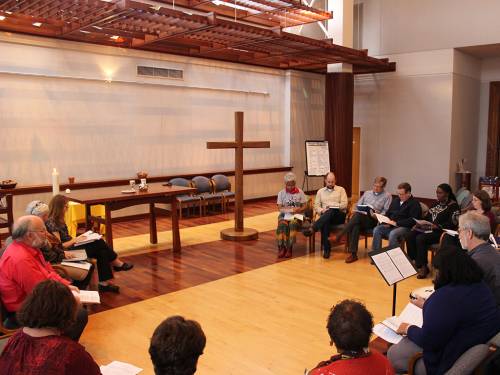 LOUISVILLE – While Presbyterians and more than 500 other clergy gathered in North Dakota in support of the Native American water protectors last Thursday, the Presbyterian Center in Louisville was the site of a prayer vigil held at the same time. The short vigil, organized by staff, allowed Presbyterians and others in and around Louisville to stand in solidarity with the Standing Rock Sioux Tribe.

“During our time in camp, amidst the sounds of a helicopter and an airplane that flew reconnaissance over us throughout the day, we met new people,” she said. “Even though we were in separate campsites, we were quickly knitted into one community; our children attended camp school, we participated in direct action training and attended community meetings seated in circles.”

Small said every community meeting began and ended with prayer and they were reminded that throughout their time at the site, they were in ceremony and prayer.

“On the second day, after prayers around the Spirit Fire and a sacred water ceremony, we went to pray along the highway at the pipeline site,” said Small. “We did not plan to engage in direct action but we knew that we could be arrested. Prayer is powerful and it is enough to provoke an arrest, and though none of us were arrested, we were ready.” 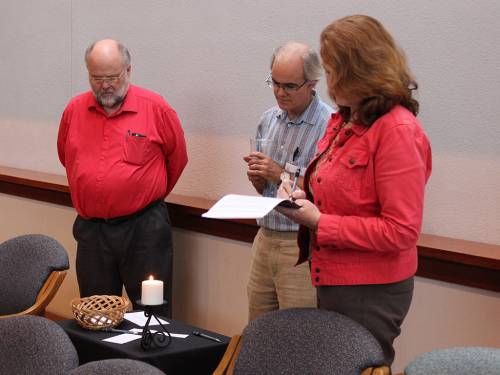 The prayer vigil ended with participants going to one of four prayer stations in the chapel. (Photo by Rick Jones)

On the third and final day of her visit, Small described the activity and arrests that took place.

“We were at the site as they sent in water protectors in trucks and vans to rescue grandmas and children and others who had walked out,” she said. “With cars on both sides of the highway, trucks raced in and out of the pit with rescued people in the back. In the midst of all of this, we continued to pray.”

Small’s testimonial was followed by a community prayer, originally offered by the Rev. Sarah Henkel of the White Plains Presbyterian Church on Reformation Sunday. Vigil participants read scripture and sang “Many and Great, O God, Are Thy Works,” a hymn written in 1842 in the Dakota Native American language. Four prayer stations were available for staff to visit and pray through out the day.

“In prayer, we remember that God is God of all our life. Our prayer is a protest of the conflicts, oppressions, and injustices that are part of life and a witness to God’s amazing grace and love,” said the Rev. Mark Koenig, PMA’s coordinator for Leadership Development, Racial Justice, and Network Support. “We pray to proclaim our commitment to the people and the causes for which we pray. We pray to open ourselves so God might use us to help answer our own prayers.”