via World Council of Churches 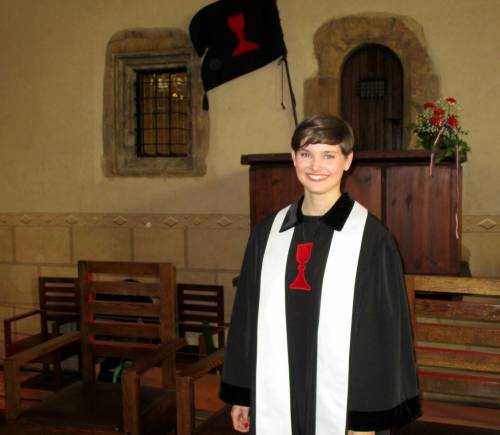 PRAGUE – Czech Television (CT2) devoted 90 minutes of programming yesterday afternoon to a liturgical commemoration of national and religious leaders, chief among them the reformers Jan Hus and Jerome of Prague who were executed in 1415 as heretics and are celebrated today as martyrs and champions of faith, intellect and liberty.

The ecumenical service of common prayer was broadcast from Bethlehem Chapel in Prague, a site of worship and teaching closely associated with Hus. “He was called to the chapel as part of his position in the university,” explained Rev. Martina Viktorie Kopecká of the Czechoslovak Hussite Church, before the service began. “It was in Bethlehem Chapel that he was encouraged to preach the gospel in Czech.”

Kopecká, a pastor of St Nicholas Church on the Old Town Square in Prague, also serves as moderator of the ECHOS youth commission and serves on the central and executive committees of the World Council of Churches. She was among the leaders in Bethlehem Chapel, reading a scripture lesson from the prophecy of Zechariah.

Other leaders included Rev. Libuse Roytova, Bishop Jan Hradl of Bratislava, Bishop Filip Stojdl of Pilsen, Patriarch Tomás Butta of the Czechoslovak Hussite Church and a panoply of representatives from churches in the Czech Republic as well as ecumenical bodies regionally and worldwide. City musical ensembles enriched the service, and a colour guard with a variety of flags symbolized the respect of church, state and cultural groups.

The sixth of July, the date of Hus’ burning at the stake, is observed as a national holiday to honor the courage he showed in speaking out for biblical authority over the machinations of a deeply divided church, and in supporting the rights of people high and low in his native kingdom of Bohemia.

Patriarch Tomás Butta has described Hus as “an epic and prophetic figure, but also a very human and very humble one.” A church reformer who lived a full century before Martin Luther, he opposed the sale of indulgences, called for proclamation of the gospel in the vernacular, encouraged distribution of the Eucharist “in both kinds” and asked for a thorough reordering of the clergy and clerical privilege.

Butta notes that Hus is remembered as a professor – and eventually the rector – of the university, as one who shaped the national identity and language, yet also as a gentle pastor and teacher of the flock.

One year ago, Bethlehem Chapel was host to a ceremony marking 600 years since the executions of Jan Hus and Jerome of Prague. Intervening months have provided many more events and exhibits in Prague exploring their legacy in what, today, is seen as an increasingly secular society. The 2015 annual report of Prague City Tourism gives much of the credit to Hus-related activities for the city’s record-breaking number of visitors during the past year.

WCC member churches in the Czech Republic and Slovakia