A Jacksonville, Florida church is working to dismantle systemic racism in a deliberative and collaborative way 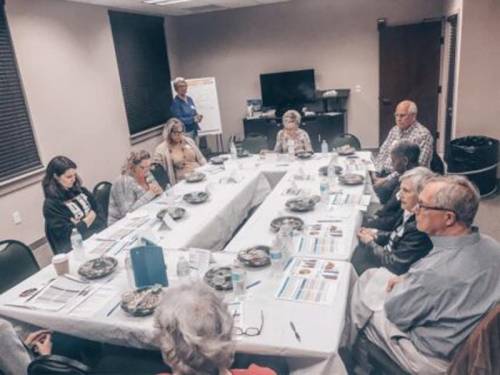 Project Common Grounds, which took flight at Palms Presbyterian Church in the Presbytery of St. Augustine, relies on deliberative dialog such as this one photographed before the pandemic. (Contributed photo)

JACKSONVILLE, Florida — During a recent online forum held in the Presbytery of St. Augustine on racial and ethnic tensions, a woman named Kristen shared her family’s story: “I didn’t really know what systemic racism was. Then my father, who wore hearing aids, was arrested during a traffic stop when he didn’t understand the rules for including his adaptive devices on his driver’s license.”

Living in a time of division, polarization, and heated rhetoric, Palms Presbyterian Church in Jacksonville, Florida, developed Project Common Grounds (PCG) to utilize education, guest speakers, the deliberative dialogue process, and sermon themes to “BE” the Beatitudes and live as “faithFULL“ citizens.

Project Common Grounds works to actively engage the world in a manner where faith is living and relevant. PCG creates a pathway for the community to address social justice issues and for Palms to act as an example of compassionate and servant leadership. PCG aims to provide the framework and tools to conduct and teach civil discourse. We acknowledge the beauty in our differences and seek the opportunity to learn from one another and love as Christ exemplified.

Using the Project Common Grounds model, Palms focuses on exploring dialogue as a spiritual practice. We practice seeing God’s presence in all of our neighbors and invite faith-based communities and the wider community to participate in the deliberative dialogue process. Past dialogues have addressed immigration, violence, mass shootings, health care, mental health, sea level rise and climate changes, and Jacksonville’s historical monuments and parks.

Many of these dialogues are attended by more than 100 participants, including local civic leaders. Participation in deliberative dialogues encourages weighing various options and listening carefully as practices of faith and a model for civil discourse in our society at large. The rich discussions reveal a substantive degree of convergence or common ground. Together we are developing tools to help overcome divisiveness and define practical ways to move forward on challenging issues.

Project Common Grounds recently conducted three online dialogues on racial and ethnic tensions that were constructive exchanges.  The “common grounds,” or agreed-upon takeaways, from the recent forums include:

Palms Presbyterian Church encourages others to join with Project Common Grounds to actively convene their congregations and civic leaders within their communities. Future planned programming and deliberations are: 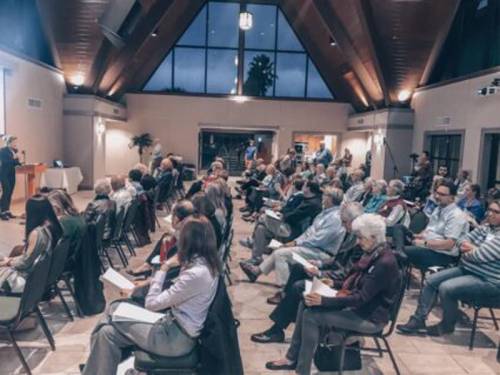 At least 100 people have turned out for each of the Project Common Grounds events. (Contributed photo)

Deliberative Dialogues and the initiatives of Project Common Grounds are not just for Palms, but rather are faith practices to be shared and replicated. Project Common Grounds can help facilitate dialogues convened by other faith- and community-based organizations. We strongly encourage all participants in our forums to reach out to faith-based organizations, government, and civil society, inviting them to share their experiences. Our goal is not to just talk, but to practice listening, practice civility, and provide valuable information to leadership beyond the polls. For further information, contact Melissa Ancelin, Administrative Assistant for Project Common Grounds at melissa.ancelin@palmschurch.org.

“My heart is filled with gratitude for the opportunity to be a part of this discussion,”  said Kristen, who’s also quoted above, following her Common Grounds experience. “I could never have imagined being able to witness white America’s empathy and coming together by looking to Christ for healing, forgiveness, and deliverance.”