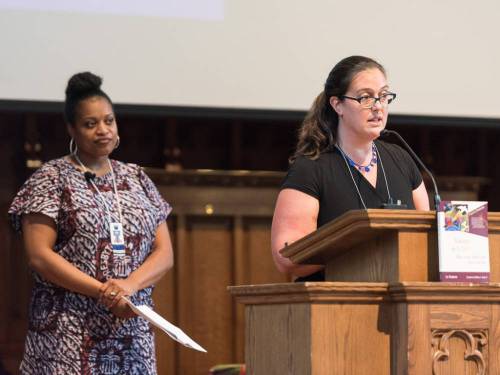 LOUISVILLE — After months of planning, the “Poor People’s Campaign: A National Call for Moral Revival” officially begins on Mother’s Day. The campaign, a continuation of the initiative launched by the Rev. Dr. Martin Luther King, Jr. 50 years ago, is calling for direct action at statehouses across the country as well as the U.S. Capitol.

The Rev. Dr. William Barber II and the Rev. Dr. Liz Theoharis, a Presbyterian pastor and co-director of the Kairos Center, are co-chairing the national effort.

“This Sunday and for the next 40 days, we will launch a non-violent moral direct action, taking place in 30 state capitals across the country and Washington, D.C.,” said Theoharis. “Hundreds of thousands of people are coming together to say that our society and country are headed in the wrong direction and we have to work to overcome systemic racism and poverty, ecological devastation and restore the world narrative that we really live in abundance.”

Theoharis says each week will have a different theme or focus, culminating with a mass mobilization at the U.S. Capitol June 21.

“The first week, we will focus on children, women and the disabled who live in poverty, with the overall theme ‘Somebody is hurting our people,’” she said. “Other themes will include the connection between systemic racism, voter suppression, immigration, homophobia, xenophobia and economic justice. Other weeks will look at the war economy, militarism and how veterans are treated in this country. Our priorities are misguided in that we spend 53 cents out of every dollar on war and the military and only 15 cents on anti-poverty programs.”

Theoharis says affordable healthcare will also be included in the six-week campaign.

“We had a conversation with leadership late last week on how the Office of Public Witness will be engaged. We’re going to provide office space for leadership to meet on those six consecutive Mondays,” said the Rev. Jimmie Hawkins, OPW director. “We have been in communication with Rev. Barber on ways we can help to bring along members of the faith community in the D.C. area and disseminate information to Presbyterians who are part of our network.”

During the 222nd General Assembly (2016) of the PC(USA), commissioners made several social justice commitments including measures to dismantle racism, address climate change and engage with a new civil rights movement.

“These are not new issues for Presbyterians. This campaign is a faith movement,” said Hawkins. “This is a natural step for us. Even though we have record low unemployment, we still have many people who are not being paid a livable wage and work two or three jobs. I don’t know of any Presbyterians who would not want to take on this role of advocacy and seek justice.” 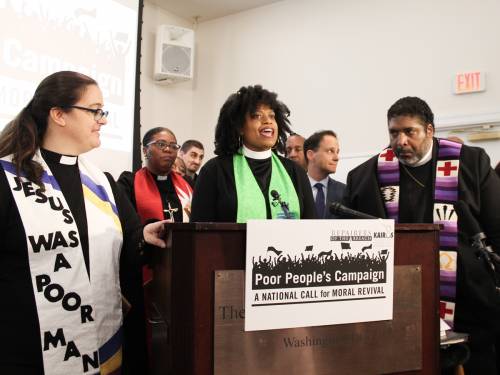 The Rev. T. Denise Anderson and the Rev. Jan Edmiston, co-moderators of the 222nd General Assembly, have voiced their support and participation in the campaign.

“It reminds me of conversations I’ve had with churches and I talk about affordable housing or unemployment and people will tell me there are no poor people living near them,” said Edmiston. “But they are living near, people just don’t see them. I believe the average parishioner doesn’t know how many homeless people there are in their communities.”

Last week, Edmiston began her new job as the general presbyter of the Presbytery of Charlotte. She says her community faces a lot of the issues addressed in the campaign.

“I’m slowly learning what the needs are here and I know it’s not just the city of Charlotte, but the six counties surrounding Mecklenburg County as well,” she said. “There are over 300 people dealing with chronic homelessness in Charlotte. That is something very important for the church to address. Bringing the needs of our community to the attention of residents is very important.”

The Rev. Frank Dew, who retired recently after 22 years with Greensboro Urban Ministry, says every community should embrace the campaign.

“People are very concerned and believe our country is in desperate need of a moral revival,” said Dew. “I think the Poor People’s Campaign is an attempt to re-define the moral narrative in a way that focuses on issues like being with the poor, voting rights, helping people to deal ecological concerns as well as the fact we have been on a continual wartime economy.”

Theoharis says she’s excited to see the campaign support at the grassroots level.

“We want to build the power of people from the ground up to be the foundation of an ongoing social justice movement, a moral social justice movement,” she said. “I hope people will see that they have to stand in the gap, come forward in these difficult and dangerous times, that they have the power to change things, change what our politicians talk about and put poor, marginalized people, which are a huge majority, at the center of our national life.”

“We don’t want this to simply be a remembrance that Dr. King died 50 years ago. It’s not enough just to commemorate that he had a powerful life, but that there are still poor people,” said Edmiston. “Many of the things he preached about 50 years ago are still prevalent today. Some of those issues may be hidden, but they’re still with us.”

Edmiston says there are a lot of things people can do over the next six weeks.

“People can write letters, go to gatherings, become aware of needs in their own community. That is what God has called us to do as the church,” said Edmiston. “It’s so easy to surround ourselves with our own friends and not realize that down the street people are struggling with food security, unemployment and health insurance.”

Theoharis says she’s been amazed by the support the campaign has received from the denomination leading up to Sunday’s launch.

“I have never been prouder to be a Presbyterian and to be ordained in the Presbyterian Church (U.S.A.) From small towns to big cities across this country, Presbyterian clergy and lay leaders are coming forward, getting involved and saying this needs to be at the top of our agenda,” she said. “It’s been beautiful to see so many churches engaged and preaching on this, talking about it and raising awareness. For too long we have not taken the words of Jesus and message of our faith seriously enough. For too long poverty has flourished when it needs to be seen as the sin it is.”

The campaign is co-organized by Repairers of the Breach, a social justice organization founded by Rev. Barber; the Kairos Center for Religions, Rights and Social Justice at Union Theological Seminary; and many organizations across the country.