…be led forth in peace. (Isaiah 55:12). Support to the Peace & Global Witness Offering.
Make A Donation Click Here >
Home › PMA and OGA boards to meet in San Juan this week 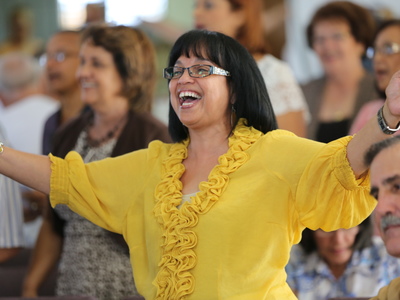 LOUISVILLE – The meeting of the Presbyterian Mission Agency Board (PMAB) and the Committee on the Office of the General Assembly (COGA) will get underway in San Juan, Puerto Rico, beginning tomorrow.

At the invitation of the Presbytery of San Juan, and owing to capacity issues for hotels in Louisville due to several conventions meeting here, the two boards made their site selection last fall after considering a proposal to meet concurrently. This comes on the heels of a suggestion by the “Increased Coordination with the Office of the General Assembly” ministerial committee to find ways for the PMAB and COGA to more closely collaborate.

The two groups will share a group plenary session Wednesday morning and will worship together that evening at Iglesia Presbiteriana de Puerto Nuevo. An offering will be received to support Puerto Rican seminary students at the service.

“This is a great opportunity to witness the mission and ministry taking place in Puerto Rico,” said Ken Godshall, Presbyterian Mission Agency Board chair. “It allows us to bring attention to the work of Presbytery of San Juan and the Sínodo de Boriquén en Puerto Rico, and it is in keeping with action taken this year by the General Assembly.”

Noting additional costs would have been incurred for transportation and housing staff and board regardless of the location, the additional cost for PMAB members and support staff to meet in San Juan is estimated at $12,000. Other cities considered were Minneapolis, Dallas, Chicago and Atlanta.

The 222nd General Assembly (2016) of the PC(USA) approved three resolutions in response to humanitarian conflicts and the financial crisis in Puerto Rico. The resolutions were compiled in a report entitled On Calling for a Just Solution for the People of Puerto Rico. It has been 20 years since the PMAB or its predecessor bodies have met in Puerto Rico.

“There are great expectations that God is doing something amazing and new for the church in Puerto Rico,” said Tony De La Rosa, interim executive director of the Presbyterian Mission Agency. “This is the Mission Agency’s opportunity to learn from, contribute to and experience the transformative power of the gospel that is beginning to bear fruit.”