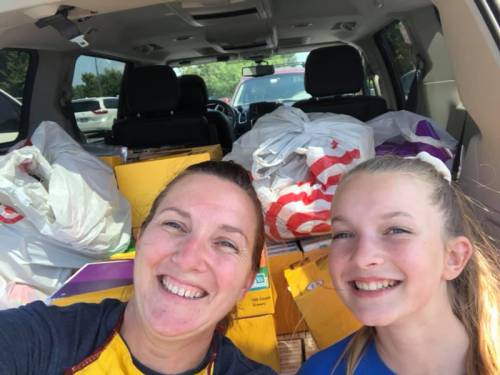 Back-to-School Fair coordinator Tenille Dewees and one of her four children with a portion of the school supplies that will be given to elementary, middle and high school students in the Greater Oxford (Pennsylvania) Area School District. (Contributed photo)

LOUISVILLE — The last Saturday before school starts has come to be known as Back-to-School Fair day for Nottingham Presbyterian Church in Nottingham, Pennsylvania. This year the tradition continues with the 11th annual event set to provide 850 to 900 elementary through high school students in the Greater Oxford Area with grade-specific essentials, allowing financially disadvantaged students to begin the year on an even playing field with their peers.

“This year is not how we thought the beginning of our second decade of hosting the Back-to-School Fair would look,” said Tenille Dewees, coordinator of the Back-to-School Fair and mother of four school-age children. “We had amazing fundraising ideas for car washes and garden sales, changes to the consignment sale portion of the fair to implement and high hopes to continue blessing our community.” While the haircuts and consignment sale can’t happen this year, Dewees said, “We still plan on blessing a bunch of families with a drive-through event.”

Dewees is the primary “shopper” for the event, buying supplies all year long as she finds sales to stretch the donations. The Presbytery of Donegal has pitched in for three consecutive years with a $1,000 grant for the project, Oxford Presbyterian Church is a faithful supporter and businesses and individuals have contributed. This year, an anonymous donor also stepped in with matching funds for the project. The annual budget for the event is just over $11,000, with around 43,500 items needed to fill supply packages for local students in need. Approximately 44% of the families attending the Back-to-School Fair have three or more school-age children.

“It would have broken all our hearts if we would have had to cancel it,” said the Rev. Merritt Schatz, pastor at Nottingham Presbyterian Church, adding that it was never a question of “can we?” but “how can we?” make it happen safely. When Dewees realized 297 more boxes of crayons were needed, Schatz gladly agreed to assist with shopping. She found 112 boxes at one store, then drove to a second store to buy 185 more, which were stocked in three different sections of the store. Several members of the congregation also helped purchase other last-minute items.

Schatz said, “God has certainly blessed this effort.” Precautions are being taken, such as having fewer people pack the bags. Delivery on Aug. 29 will be contactless drive-through. Families will wear a mask and remain in their vehicles while the supplies are loaded by volunteers.

Parents and students are very appreciative, Schatz said. More than 40% of students within the Oxford Area School District are at a financial disadvantage, according to the Pennsylvania Department of Education. The percentage of students is so high that all students in kindergarten through Grade 8 receive free breakfast and lunch as part of the National School Lunch Program. The district has decided to begin the school year with virtual learning this year.

“COVID-19 is a trauma,” said Schatz, who served on the Presbyterian Disaster Assistance National Response Team for eight years and is now on the PDA’s National Volunteer Team. She has found that the pandemic has called upon her training in resilience and caring for the caregiver, not just in teaching these skills to others but in self-care as well.

Nottingham Presbyterian Church canceled in-person services a week before it was required. Initially Schatz used her phone to record the sermon and children’s address. It’s been a steep learning curve, she said, branching out into Zoom calls, coffee fellowship hours and Facebook. Some church members have a good friend in New Zealand who has been enjoying services, which would have never been possible had the church not gone to online services.

Early on the church divided the congregation, approximately 60 members, so that each deacon and elder can regularly reach out to three or four members. Not just to say if you need anything, call us, but to touch base to let members know they are not alone during this challenging time. 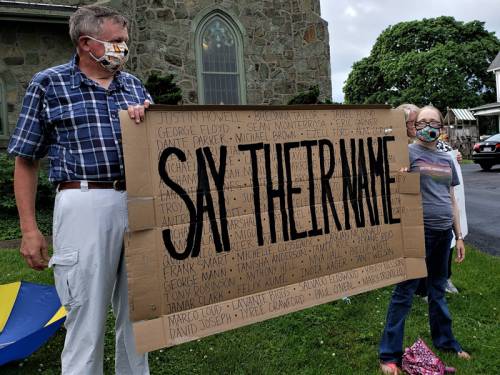 On June 5, about a dozen members of Nottingham Presbyterian Church took part in an outdoor event to lament, repent and commit to the work of dismantling structural racism. (Contributed photo)

On June 5, the Presbytery of Donegal issued a Statement on Racial Injustice and Call to Action, stating that “the death of George Floyd has brought us to a Pentecost moment in the Church and our larger society.” The statement explains, “We grieve for him, as well as Ahmaud Arbery, Breonna Taylor, and so many more African Americans created in the image of God.” 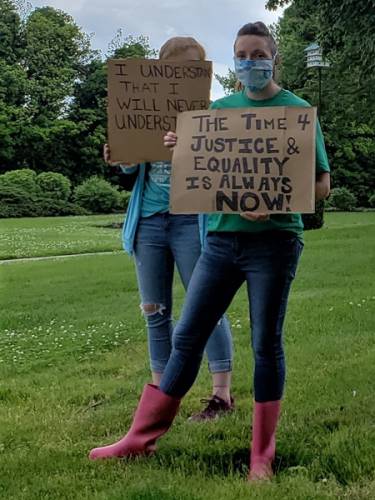 The death of George Floyd has been a “Pentecost moment” for the church. (Contributed photo)

Nottingham Presbyterian held a socially distanced, outdoor gathering with masks required and signs encouraged. About a dozen people gathered the day the presbytery’s statement was released. Together they lamented, repented and committed to work for the end of racism. There were rain showers just before and light rain sprinkles after, but during the lament event the weather cooperated. Since the church is located at an intersection with a traffic light, some people lowered their vehicle’s window to say thank you. The passenger of one car, a woman, shouted to those holding signs while pointing at the driver, “His horn doesn’t work or he would have honked.”

Eight members of the congregation also have recently completed a study with another Presbyterian church of Carolyn B. Helsel’s book, “Anxious to Talk About It: Helping White Christians Talk Faithfully About Racism.” They plan a second book study in the fall. In addition, Nottingham Presbyterian is also bearing witness through a gift to a local African American Presbyterian Church to help with its Community Building mortgage. These efforts are “a beginning” of the church and presbytery’s commitment to dismantling structural racism. 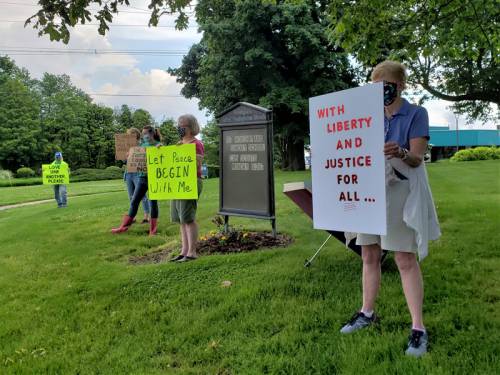 At Pentecost (Acts 2:4), the Holy Spirit did not discriminate based on race, gender or ethnicity. Instead, “all were filled with the Holy Spirit.” (Contributed photo)

“We feel it is essential for white Christians to acknowledge our historic role in racism, and its present consequences and activity,” Schatz said. “We repent of our silence, complicity, ignorance and inaction. We seek forgiveness through changed behavior and advocacy.”

Nottingham Presbyterian’s session has made the decision to continue virtual church until at least January 2021. By making this decision now, Schatz said, the church can begin to think about and plan for Advent and Christmas in a whole new way.