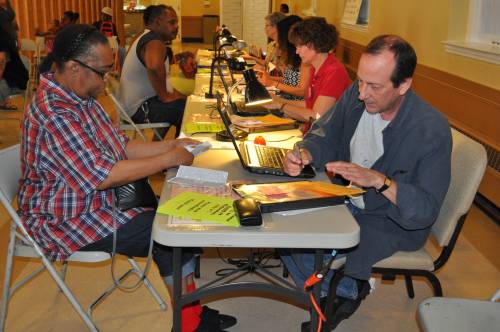 Clients may visit the food center at Morrisville Presbyterian Church once each month. (Contributed photo)

LOUISVILLE — The Food Center at Morrisville Presbyterian Church in Pennsylvania opened more than two decades ago as an emergency resource. As the federal government shutdown dragged into its fourth week, volunteers there realized a new emergency was developing.

“Ron Workman, who is our treasurer, is the one who suggested we might want to look into offering food to furloughed federal employees,” says Carol Romano, operations manager for the food bank.

The U.S. government shut down on Dec. 22 in the midst of a dispute between President Donald Trump and congressional Democrats over the issue of funding a wall at the country’s southern border with Mexico. At 26 days, as of Wednesday, it is the longest government shutdown in United States history, with more than 800,000 federal workers missing their first paychecks last Friday.

Situated on the Delaware River, across from the New Jersey state capital, Trenton, Morrisville Presbyterian is an area with a lot of federal workers. The church has put out the word that when it has its weekly food distribution Wednesday, furloughed federal employees are welcome.

Romano said she is not sure what sort of response the center, which serves Lower Bucks County, Pennsylvania and the Greater Trenton area, will get from federal workers in its first distribution day since offering them assistance.

She notes that so far the employees have missed only one paycheck. “I think there is sort of a stigma in coming to a food center, so whether federal workers want to access that or not, we really don’t know,” she said. “But we want to open it up and provide an option to people who work, living paycheck to paycheck and didn’t know how they were going to meet their food needs.”

The food center opened in 1997 and offers non-perishable foods, fresh produce, baked goods and fresh meats. Romano says the center started as a resource for people in temporary, sudden need, like the government shutdown. But the center now offers supplemental food assistance to people living in poverty.

Romano said furloughed workers would get the same sort of help as other clients, based on the size of the family.

The food center is supported almost entirely through donations from Morrisville Presbyterian and other area churches, as well as private donations. As the shutdown unfolds, Romano sees parallels to Hurricane Sandy, which struck the Northeast in 2012.

“We had a lot of people who were affected and lost their homes either permanently or temporarily,” Romano said.

But there is uncharted territory in the prospect of a prolonged government shutdown, and how its impact may reverberate throughout the community, beyond federal employees.

“I started thinking, what if this goes on to the end of February and people lose their SNAP benefits, and things like that,” Romano says. “This came together really quickly, and I imagine if this gets rolling … we’ll react as needed to serve the people in our area.”