Hurricane season prompts need for networking and ministry of presence 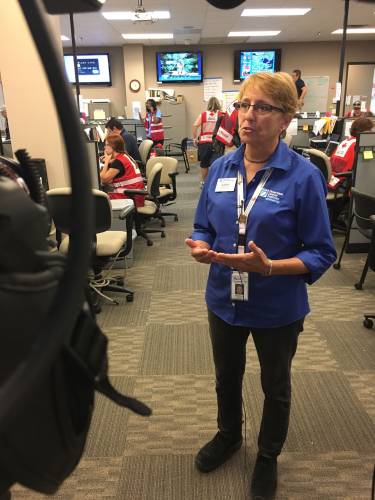 Kathy Broyard, shown here during a previous disaster, is executive director of the Florida Presbyterian Disaster Assistance Network and assisting with the response to Hurricane Ian. (Photo by Mike Fitzer, Film 180)

LOUISVILLE — As Kathy Broyard of the Florida Presbyterian Disaster Assistance Network (FLAPDAN) travels through Fort Myers, one of the areas hardest hit by Hurricane Ian, she is moved by the magnitude of the destruction.

Ian came ashore on Sept. 28, near Cayo Costa, Florida, packing maximum sustained winds of 150 mph, according to the National Environmental Satellite Data and Information Service. The hurricane, which tied the record for the fifth-strongest hurricane on record to hit the United States, wreaked havoc in southwestern Florida, generating storm surges as high as 12–18 feet above ground level and producing extreme rainfall amounts as it moved north. At least 100 people were killed statewide, according to media reports.

“There’s a lot of wind damage. A lot of storm surge happened here, so a lot of flooding,” said Broyard, an emergency management specialist who’s executive director of FLAPDAN and a member of PDA’s National Response Team. “We’ve talked with the pastors at the churches that we’ve visited so far and some of their members are doing just fine, you know, picking up tree limbs, and then others, they’ve lost everything, and so it’s heartbreaking. But we’re here to serve and just hopefully, get resources where they’re needed.”

FLAPDAN’s work is just one of the ways that Presbyterian Disaster Assistance is responding to this destructive hurricane season in which Ian and other storms have impacted Puerto Rico, Cuba and multiple states, including Georgia and the Carolinas.

Two of PDA’s National Response Team members were deployed to Florida this week to collaborate with FLAPDAN, which already had begun the process of visiting churches with people like the Rev. Melana Scruggs of Peace River Presbytery, Broyard said.

“We’re members of Florida VOAD (Voluntary Organizations Active in Disaster), and so one of my major roles during a disaster is to connect resources with needs” and to report them to our “VOAD partners, so we can all coordinate and communicate where those needs are, what resources are needed, that kind of thing,” Broyard said. “We’re not just doing this in our own little Presbyterian world, but we are cooperating with and collaborating with the United Methodists and the Baptists and Salvation Army, Red Cross and the county emergency managers and the state emergency managers. … We all try to stay connected and coordinated, so we’re not duplicating efforts.”

Scruggs, general presbyter in Peace River Presbytery, said all 37 churches in the presbytery “had some damage, even if it was just trees down.” 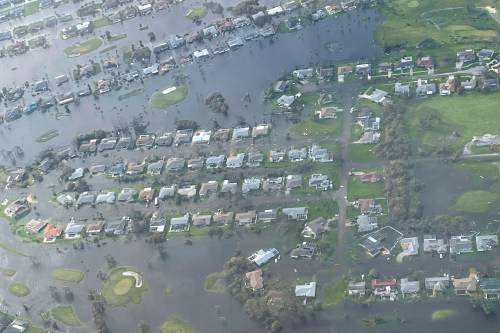 The view as a Coast Guard aircrew conducted overflights around western Florida in the wake of Hurricane Ian. Crews look out for people in distress, the scope of damage and potential pollution. (Photo by Coast Guard Petty Officer 3rd Class Kruz Sanders)

Also, “our church in North Port, St. Paul’s, had 4 feet of water. The water has finally receded, so we just got in there yesterday to take a look,” she said. “The water mitigation itself is going to cost $125,000; that’s not fixing it once it’s dry.”

“So far, we have six retired pastors whose homes are uninhabitable,” she said. There are churches with “extensive damage” and “members who’ve lost everything, and whole communities around them that have lost everything.”

But people from around the country have been calling to help, Scruggs said. “What we need right now is money or gift cards, so that we can help people get food, get a place to stay, get gasoline.”

PDA has approved an initial assistance grant to help with these immediate unmet needs; however, more financial assistance is needed.

Meanwhile, Scruggs is grateful to everyone who’s shown concern or prayed for those affected.

“We appreciate all the prayers; so many people have expressed that they’re praying for us,” she said. “During the storm, I was getting messages from PDA, so I just appreciate our connectional nature.”

Meanwhile, PDA’s Michelle Muñiz-Vega is working hard to be present for those impacted by Hurricane Fiona in Puerto Rico. In recent days, she’s been able to talk with leaders in the southwestern region, where the impact of the hurricane was significant and continues to be felt.

“We’re talking about people who have no access to power even now,” said Muñiz-Vega, PDA’s Disaster Recovery Coordinator in Puerto Rico. The power company “is saying that over 90% of the clients have power now and in the comments section you will see a lot of people saying I don’t know where this 90%” is. “There’s a little bit of frustration on that.”

The fact that there have been a series of disasters, from storms to earthquakes to the pandemic, also is weighing on people, Muñiz-Vega said.

“People are tired physically but also emotionally of going through trauma after trauma” and are starting to see it impact the mental health of young people, she said. “That can be tied to not only going through, you know, all these disasters, but having school interrupted so many times” in the past few years.

But residents also are displaying their strength. “I have to highlight that most of the progress is made by just the same civilians and the same people helping other people,” she said. “Local and grassroots organizations have been the first responders in the last couple of years,” but systemic or bureaucratic challenges impact how fast recovery can occur.

The Rev. Edwin González-Castillo, PDA’s Associate for Disaster Response in Latin America and the Caribbean, agreed. “The situation in Puerto Rico is difficult because it’s a combination of the natural disasters and also the lack of resources for people in the island, unemployment, the economical crisis, a weak infrastructure and that has affected many Puerto Ricans, especially the elderly, in many ways, so it’s a historical and generational trauma that is being faced by many Puerto Ricans.”

PDA is one of the Compassion, Peace and Justice ministries of the Presbyterian Mission Agency. To support the church’s response to hurricanes and typhoons, designate your financial gifts to DR000194.