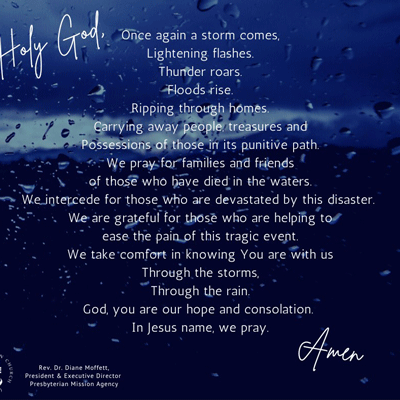 LOUISVILLE — The devastating flooding in eastern Kentucky that took the lives of at least 37 people is part of a series of flooding events that Presbyterian Disaster Assistance is offering support and prayers for.

Virginia’s flooding was severe but does not appear to have been deadly; dozens of people initially were reported missing but were eventually located, according to media reports.

In the Midwest, PDA has been in contact with church leaders in St. Louis, which has experienced back-to-back flooding events in the last few weeks and had at least two deaths.

“The last month or so has been very destructive in terms of flooding,” Kirk said. “Once again, we’re seeing systems that are dumping an unbelievable amount of water in a very short amount of time, and communities are just not equipped to handle that much water in that short of a timeframe,” especially when their infrastructure is inadequate or hasn’t been well-maintained.

In response to flooding that occurred around July 12, “PDA deployed to Abingdon Presbytery, which is in western Virginia, and we’ve received two church damage grant requests and an initial assistance grant request,” Kirk said. (Church damage grants assist with continuing ministry that may otherwise be at risk.)

PDA also has been in contact with church leaders in the Presbytery of Giddings-Lovejoy who are serving churches that were flooded, and those leaders are “working very hard to support community members that have been flooded,” Kirk said.

In Eastern Kentucky, authorities have confirmed nearly 40 people dead. Search and rescue is ongoing for others endangered when torrential rain caused rivers and creeks to overflow, leading to flooding in more than a dozen counties, according to media reports.

In response to the devastation that started July 26, PDA has “been in touch with the (Transylvania) presbytery, anticipating both church damage grant requests and initial assistance requests, and we have a team that’s going in on Friday,” Kirk said. “It will be an initial deployment, so they’ll work with the presbytery leadership and congregational leadership in the impacted communities to help assess the need and connect with the resources and — as always — offer ministry of presence.”

Presbyterians and other concerned individuals can assist communities impacted by flooding by making donations to PDA.

“Resources are needed now but will be needed in the weeks, months and years to come. Making a donation will enable the denomination to be in a position to support the long-term recovery,” Kirk said.

Presbyterian Disaster Assistance is one of the Compassion, Peace and Justice ministries of the Presbyterian Mission Agency. To support PDA’s response to the recent flooding and future natural disasters, make gifts to DR000191.